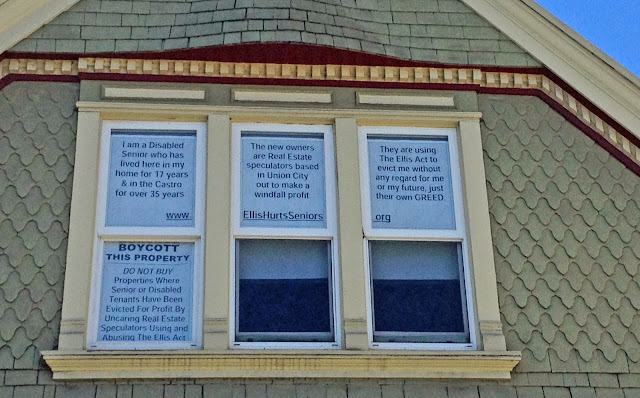 Jeremy Mykaels is making certain that any buyer for his home of more than 18 years is aware that the purchase means throwing out a disabled elder.

Join Eviction Free San Francisco at a rally at Jeremy Mykaels' home at 460 Noe St. (near 18th St.) on Saturday, October 19 at 1 pm to protest the eviction of a gay, HIV-positive Castro resident. You can learn more from Mr. Mykaels' website, Ellis Hurts Seniors.

Last January at Time Goes By I used a Gay and Gray column to pass along some Mr. Mykael's own description of what is happening to him. Here's a bit:

Shouldn't we ... do our best to protect our senior and disabled long-time residents and keep them from losing their homes just because someone else wants to make a windfall profit?

... I think using the Ellis Act to evict seniors and/or disabled tenants who have lived in their apartments for 10, 15, 20, 25 years or more, most times just subsisting on fixed incomes and who may be forced to move out of San Francisco altogether because they won’t be able to afford a new apartment here with rents at least 2-3 times higher than they have been paying under rent control, is simply WRONG!

The Ellis Act is a California State law that overrules local tenant protections. Buildings dating from before 1979 in San Francisco fall under rent control and eviction protections for longstanding tenants -- unless an owner can clear all the tenants out and promise to hold the units off the rental market for five years. The owner can however sell the vacated building as a "tenancy-in-common" for a group of new owners, frequently strangers assembled by a real estate entrepreneur. There are huge profits to be had in this speculative churning. Over the last year, the number of owners going the Ellis Act route increased from 64 to 116 properties.

The current tech boom has created 55,000 jobs in this housing starved market. The influx of well paid techies provides huge incentives to drive out tenants who have been protected by rent control. Decontrolled units are seeing huge increases. According to a New Yorker blog post:

With so many high-salaried techies able to pay exorbitant rents, and outbidding one another to pay even more, San Francisco’s rents have led the country in increases -- they rose nearly eight per cent in the second quarter from a year ago, according to MPF Research. The average rent for the second quarter was one thousand nine hundred and ninety-nine dollars, according to Reis, up from one thousand nine hundred and twenty-one dollars a year earlier. Of course, only a certain well-heeled population can afford this. San Francisco public-health officials said last week that a tenant earning minimum wage would need to work more than eight full-time jobs to afford a two-bedroom apartment downtown.

... evictions from San Francisco’s rent-controlled apartments are at an eleven-year high.

Each wave of prosperity followed by gentrification changes the character of this city. If my partner and I had not been able to buy in over 20 years ago, we'd have almost certainly been gone by now. Many of our friends are gone elsewhere.

And we all have to wonder: where will the people who do the ordinary work of a city live? Attractive cities all over the country are going to have to answer that question. San Francisco has a relatively good minimum wage, current $10.55/hour. In Seattle, both major candidates for mayor have needed to express openness to the once-farfetched notion of a $15/hour minimum. But where will low wage workers live? Can cities maintain their diversity as the cost of living in them soars? Will they still be desirable as gentrification homogenizes them?
Posted by janinsanfran at 5:00 AM

People can be forced from their homes for many reasons including rising property taxes as values skyrocket. It is part of a 'free market' system that not only renters but owners can lose out to eminent domain when a government decides it can get higher tax rates by forcing out some from low cost housing to be replaced by resorts or estate level homes. Americans could change the laws but Americans often think they profit from letting the more powerful take from the weak.

I'm glad that activists are defending renters. This is such a shame.

Wow! Someone who profits from rent control (on a space they have NO ownership of) has the nerve to call out owners who want thier profit. What a hypocrite!