Without grounding in human rights, there is no ground to rise from 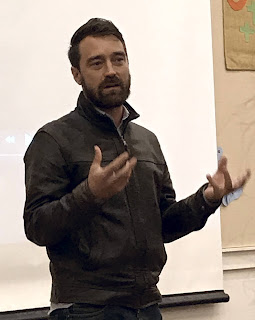 Last week I had the chance to attend a talk by Noah Bullock, director of Cristosal, on his organization's work in El Salvador, Guatemala, and Honduras. Cristosal works across the Northern Triangle of Central America to monitor forced displacement by physical and sexual extortion and violence, to create models for humanitarian, psychological, and legal assistance to victims of human rights violations, and to demonstrate effective strategies for sustainable, community-based victim protection and support.

What's that boilerplate mean? Cristosal is currently assisting litigation for recognition of and compensation to the survivors of the El Mozote massacre and other war crimes of decades past within the legal institutions of the Salvadoran state. This effort strengthens what should be foundations of reliable rule of law in that violent country. Today, all these countries suffer from oligarchic gangster governments which do not provide security to their people. Chronic violence and the nonexistence of effective state institutions that might protect people in their homes drive migration both within these countries and out of the countries. Cristosal has been instrumental in supporting local initiatives to recognize the rights of citizens to live in their home places in peace and without fear.

And, since these Central American countries come nowhere near providing their people the security they have a right to expect from law enforcement, Cristosal -- where it can -- provides immediate protection to move people out of danger. Moreover, they are attempting to show that people displaced by violence can be reintegrated into new communities where they'll be safe and can live in peace. This is not simple -- it's not as if anyone anywhere really wants an influx of traumatized newcomers; that sentiment is not unique to the U.S. Before Trump came along, the USAID funded some of these initiatives but nowadays the US government likes the gangster status quo. As in so many policy areas, our government acts as if it hopes all those annoying Spanish-speaking poor people would just die where they are.

Cristosal is well known in El Salvador and the rest of Central America for its work; the organization is demanding that governments and all of us take human rights as inviolable and worth defending.

I did not come up as a leftish activist in a time when human rights were at the top of our minds. In the decades of the struggle within the United States for African-American civil rights, during the heady rush of decolonization across the globe, and of the struggle against imperial resistance to national freedoms, we thought that some form of revolution was the way to justice. The suffering people would (and should) rise up and replace the bums in power. Unhappily, the track record of 20th century revolutions has not been that good. We thought "human rights" was something some First World liberals tried to impose on the world after they won their anti-fascist war in 1945 -- a good thing, but peripheral to the real conflict of classes and races.

Meanwhile, it was activists in what we then called the Third World -- developing countries as we'd probably call them now -- who occasionally reminded enthusiastic North Americans that international institutions like the the United Nations and the World Court should be guarantors of human rights, of human decency. They knew something about permanent struggle and the need for institutional bulwarks of freedom that we thought we could skip over.

On the Cristosal website, Noah Bullock explains how a nice young man from Montana who landed in El Salvador in 2005 (and stayed), understands the centrality of human rights law and concepts in the long arc toward justice and freedom.

“Human rights were taught to me as a historical process, and every generation has to be able to understand human rights and violations in their own time.

"Our moment has changed significantly from when these frameworks were established, so we are challenged now to find ways to apply these same principles in programming to address our moment’s greatest challenges of displacement by violence, poverty, and inequality.”

I am appending here a short film (10 minutes) that tells a story of Central American violence as lived by some of its victims. It has been shown more than 10 times on Salvadoran television -- and that legislature recently enacted a law purporting to guarantee that police should protect citizens. They neglected to append any funding though ... And so the struggle continues ...