Death penalty: "All cost and no benefit" 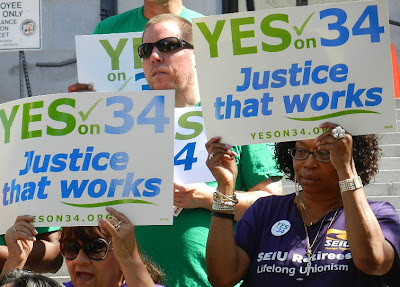 According to today's San Francisco Chronicle:

The poll, conducted Oct. 25-30, was the first to show a lead for Proposition 34, which had trailed 42 to 45 percent in the last survey in mid-September. Polling also found that a majority agreed with one of Prop. 34's major premises - that the death penalty is more expensive than life without parole - and a plurality said innocent people are executed "too often."

Some other recent statewide polls have reported Prop. 34 trailing by as much as seven percentage points. But Field Poll director Mark DiCamillo said his organization's new survey was more up-to-date and found that the measure's margin of support had widened by six percentage points in a single week. …

…Yes on 34 campaign director Natasha Minsker said the poll results indicate voters are getting the message.

"When they hear our message and they hear the facts, they are much more likely to support the initiative," she said. "I think it really shows that the voters are learning the death penalty is all cost and no benefit."

… Sponsors of Prop. 34 have stressed the severity of a life sentence with no hope of release and made the cost of the death penalty their leading issue - $130 million a year more than a life-without-parole system, according to the Legislature's fiscal analyst, a figure that opponents dispute.

The new Field Poll found, for the first time, that a strong majority - 53 to 31 percent - agreed that the death penalty was more expensive than life without parole, a question that produced an even split a year ago.

Off to get out the vote.

Posted by janinsanfran at 6:36 AM

PROP. 34: The Truth Will Kill It
Dudley Sharp

An honest discussion about Prop 34 would result in its overwhelming defeat.

Are the cost claims made by the pro Prop 34 folks accurate? Maybe not (1). The ACLU cost review was easily destroyed (1) and Mitchell and Alarcon, of the $4 billion study infamy, refuse to share their database (1), which we can presume has problems and, therefore, no one can, responsibly, depend upon that review.

Is it possibly that life without parole (LWOP) may cost more than the death penalty? Yes (1).

Is it required that California citizens allow their representatives to be so irresponsible with both their state budget and death penalty management? Of course not.

Virginia has executed 75% of those sentenced to death and has done so within 7.1 years, on average.

All states, inclusive of California, could implement similar protocols and save money over LWOP.

Ask the media (or insert any industry) this question.

How principled are you?

If you had a group of corrupt people, who only wanted to shut down the media, by sabotaging the media, would you say, OK, shut down all media?

Or would you say, let's clean it up, get you bad folks out of the picture, and make it work?

A vote for Prop 34 is a vote for folks who have intentionally obstructed justice in these cases, meaning anti death penalty legislators, the defense bar and judges who have made the death penalty so irresponsible and who are the same folks telling us to reward them by giving them what they have been working for, based upon the horrible system they have engineered.

How about demanding a responsible system, such as Virginia's, whereby 75% of those sentenced to death have been executed within 7.1 years, on average - a system similar to what Ca should have, if responsible folks were in charge.

Calif has executed 1.4% of those sentenced because such mismanagement is what such obstructionists (read Prop 34) had in mind.

b) Innocents More At Risk Without Death Penalty
http://prodpinnc.blogspot.com/2012/03/innocents-more-at-risk-without-death.html