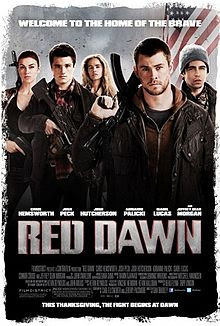 "For them this is just some place. For us, this is our home."


Because I'm spending a couple of days sitting on an ice bag in front of the tube watching football, I've been hearing that a lot.

It is the tag line for the trailer for a teenage shoot-em up action thriller that opens this week. Here's the premise:

Spokane, Washington becomes the initial target of a foreign invasion. Under enemy occupation, the town's citizens are taken prisoner. A group of young people, calling themselves 'The Wolverines' (after their high school mascot), band together in the surrounding woods. There, they train and organize themselves into a group of guerrilla fighters in order to liberate their town."

I guess this one won't be playing in Gaza. Might confuse the inmates of Israel's open air prison.
Posted by janinsanfran at 5:00 AM

I don't know why Hollywood just keeps remaking remakes -- the original Red Dawn was just fine. Is it because there is no imagination in L.A. anymore? And I hate trying to prove I'm not a robot -- I am a robot, I just have poor eyesight!