The public and the scientists

There's a graphic floating around the web that comes from a Pew study about science and society. The general public thinks differently than the scientists: 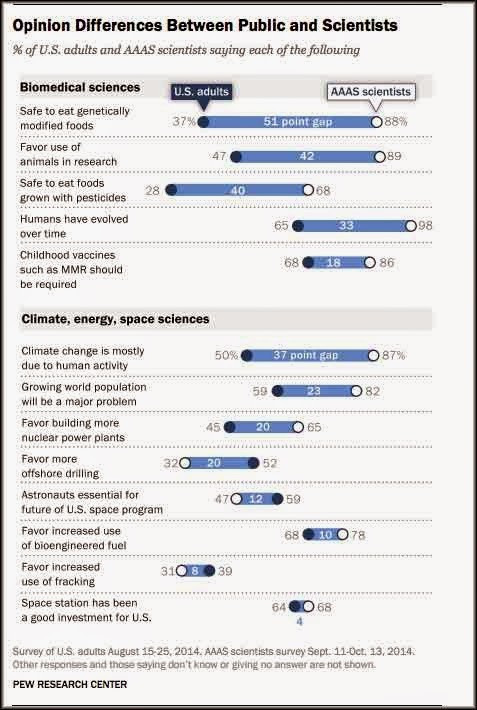 Mostly I'm on board with the scientists, not too surprisingly. But I find it interesting to think a little about the items on which I part company with them. Do you find that you agree with the scientists? If not, do you know why? This seems a worthwhile exercise.

Email ThisBlogThis!Share to TwitterShare to FacebookShare to Pinterest
Labels: science

I am married to a scientist (inorganic chemist) who is also an engineer. I pass a lot of things by him to get his take. I always listen but we don't always agree.

Through over 50 years now of marriage, we have learned we do see things very differently and can respect that-- or likely would not have made it this many years.

When the kids were little, they'd ask-- how do we get fog. I'd say the clouds get stuck on trees. He'd give them the scientific answer with lengthy details. It has made for a fun mix.

He is not though with scientists on all the things listed there-- pesticides in particular, which is one of the issues with GMO food. Plants are being grown to have these really 'evil' pesticides used and they thrive. But do we when we eat that plant? He would say no based on the chemical make-up of some of them.

One thing about the scientists is a lot of them are in the employ of an industry. Even those in the universities have to get grants that often come from corporations; so they aren't quite as unbiased as they might like us to think.

Scientists, and I've known a few including my husband, are just as likely to have crackpot ideas as anyone else. They just think they are more rational and logical than the rest of us.
My husband would agree with the above paragraph.