Once upon a time, there was a president ...

A Presidents Day meditation
When I was growing up in the 1950's, I thought of George Washington as an icon wearing a three cornered hat who had lived in an unimaginably distant past. 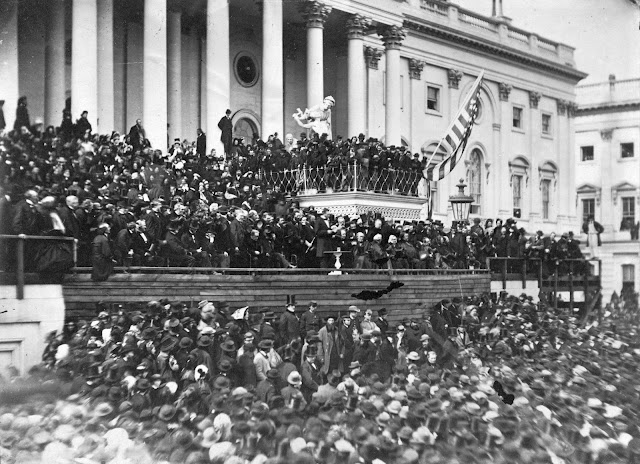 But Abraham Lincoln was a much closer presence. You see, my great-grandmother, my mother's grandmother, attended the 16th president's second inauguration as a teenage girl. (She's somewhere in that crowd; Lincoln is the man reading from a paper in the center. I don't know if there was voice amplification; I think not.) Her father was serving a term as a Western New York Congressman. Both those ancient relatives were long dead by the time I came along, but her grandmother had been a lively presence in my mother's youth. So I was raised by someone for whom the era of the war to subdue secessionist Rebellion and preserve the Union was no more distant than World War II is today. Lincoln was nearly a century dead by the time I came of age, but he was not a wispy ghost from ancient history.

The 1850s, the formative decade just before Lincoln was elected President and the (dis)United States went to war over slavery, was easily as partisan and divided as our time and even more violent. The design of U.S. Constitution made it possible for Reaction, in that era dubbed the Slaveocracy, to impose its will on the more populous and "progressive" Free States. (Still true of course: 180.8 million people are represented today by the 49 senators who caucus with the Democrats; 141.7 million people are represented by the 51 senators who caucus with the Republicans.) The atrocity that was the slave system flowed into posses of slave catchers invading "free" states in search of escapees, massacres of abolitionists in the disputed Kansas/Nebraska territories, and a vicious assault by a South Carolina Congressman on an abolitionist Massachusetts Senator in the Senate chamber. Politics was a rough enterprise.

In 1855, the future President Lincoln, then a former one term Illinois Congressman sidelined for the time being, wrote a letter to his slave-owning Kentucky friend Joshua Speed drenched in the brutality around him. It includes one of his few recorded descriptions of seeing humans in chains. But "miserable" as he was at the sight of shackled slaves, the sight led him back to his concern for upholding the country's Constitution. His empathy was less for the slaves than for the feelings of Northerners up against the Slave Power.

I confess I hate to see the poor creatures hunted down, and caught, and carried back to their stripes, and unrewarded toils; but I bite my lip and keep quiet. In 1841 you and I had together a tedious low-water trip, on a Steam Boat from Louisville to St. Louis. You may remember, as I well do, that from Louisville to the mouth of the Ohio, there were, on board, ten or a dozen slaves, shackled together with irons. That sight was a continued torment to me; and I see something like it every time I touch the Ohio, or any other slave-border. It is hardly fair for you to assume, that I have no interest in a thing which has, and continually exercises, the power of making me miserable. You ought rather to appreciate how much the great body of the Northern people do crucify their feelings, in order to maintain their loyalty to the Constitution and the Union.

Lincoln did not hesitate to call out the violence he saw the Slave Power doing to his beloved Constitution and Union, exemplified by the act allowing extensiion of slavery to the Nebraska territory.

The Slave Power had trumped representative democracy, though Lincoln would not have used that language as the "representative" and "democracy" had different meanings at the time.

The letter goes on to come close to despair about the country's violent divisions. It had been easy for additional reactionary energies to emerge as a party of northern anti-immigrant nativism and anti-Catholicism, labelled by contemporaries the "Know Nothings." This served the Slave Power well, dividing their opponents.

The future president seems to have been a good and moral man, moved by aspirations of empathy as well as by shrewd political calculation, by politics as the "art of the possible."

A little over a decade after emancipation and Lincoln's murder, the abolitionist leader Frederick Douglass summed up what sort of ally Lincoln had been to the Cause at the unveiling of the Freedmen’s Monument in Lincoln Park, Washington, D.C.

I have said that President Lincoln was a white man, and shared the prejudices common to his countrymen towards the colored race. Looking back to his times and to the condition of his country, we are compelled to admit that this unfriendly feeling on his part may be safely set down as one element of his wonderful success in organizing the loyal American people for the tremendous conflict before them, and bringing them safely through that conflict. His great mission was to accomplish two things: first, to save his country from dismemberment and ruin; and, second, to free his country from the great crime of slavery. To do one or the other, or both, he must have the earnest sympathy and the powerful cooperation of his loyal fellow-countrymen. Without this primary and essential condition to success his efforts must have been vain and utterly fruitless. Had he put the abolition of slavery before the salvation of the Union, he would have inevitably driven from him a powerful class of the American people and rendered resistance to rebellion impossible. Viewed from the genuine abolition ground, Mr. Lincoln seemed tardy, cold, dull, and indifferent; but measuring him by the sentiment of his country, a sentiment he was bound as a statesman to consult, he was swift, zealous, radical, and determined.

Though Mr. Lincoln shared the prejudices of his white fellow-countrymen against the Negro, it is hardly necessary to say that in his heart of hearts he loathed and hated slavery. ... The honest and comprehensive statesman, clearly discerning the needs of his country, and earnestly endeavoring to do his whole duty, though covered and blistered with reproaches, may safely leave his course to the silent judgment of time. ...

Political geniuses who combine empathy, subtlety, courage, and moral decency obviously are the rarest of leaders. On this Presidents Day, when we are stuck with a petulant infantile narcissist in the White House, it seems right to remember that, once upon a time, there was a president ...
Posted by janinsanfran at 5:00 AM