On "Bowling Alone" -- hanging separately or together? 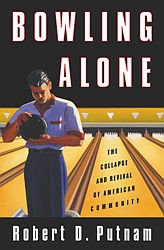 Quite simply, Robert D. Putnam's Bowling Alone: the collapse and revival of American community has had more of an impact on my thinking about this country and the social and political movements in which I work than anything I've encountered in years. Published in 2000, Putnam wrote before the dubious election of 2000, before 9/11, before the present rightwing ascendancy. The fact that nothing in my reading of events since contradicts his main thesis greatly increases its authority for me.

This is an astonishingly ambitious book. Putnam seeks to aggregate huge quantities of disparate data -- then explain -- and then understand -- the implications of a huge decline in what he names "social capital," the communal networks of trust that that underlie a well functioning society.

Since the mid 1960s, in every arena, he documents that people in the US have withdrawn massively from the institutions and social structures that create social cohesion. We not only are less likely to vote, we are less likely to belong to a church, attend a club meeting -- or perhaps even more tellingly to spend our recreational time playing cards with neighbors or visiting friends. As the pre-World War II generation passed from the scene, Boomers (born 1946-1960) participated less and less in the collective activities that build social trust. And the generational cohorts that have followed are even less participatory.

This is hard for those of us who do live very actively in community, of whom I am emphatically one, to believe. I'm a Boomer who grew up inspired by notions of "participatory democracy" and has never stopped trying to build it. And so I am tempted to suggest simple explanations for the social trends Putnam describes. Maybe he has missed (or misread) the changed nature of social capital when most women work outside the home? Maybe he assumes cohesive neighborhoods have to look like older cities, while suburbs generate new forms like megachurches and soccer leagues? Maybe the new self-assertion of gay people has generated new customs and venues that replace some of the time once spent on family dinners? Maybe informal book groups have replaced club meetings for many? Maybe we watch a lot of TV alone, but we communicate with others actively on the internet and through blogs? Putnam looks at all these apparent countervailing trends and many more, and concludes convincingly that none has slowed the erosion of our social capital.

And that erosion matters, because social capital is what makes possible trust between people who do not know each other, as well as trust in community institutions. Trustful societies work.

By that standard, this society is a mass aggregation of frustrating frictions.

Having laid out the problem exhaustively, what does Putnam propose we should do about it, this reflexively activist reader asks? Not surprisingly, this section is much weaker than that desribing our condition. These are huge social forces after all. He looks for lessons from the Progressive Era in US history at the end of the 19th and the beginning of the 20th centuries. He describes a conscious effort in that time and place, by many sectors, immigrants and industrialists, men and women, religious and secular folks, to launch organizations and activities that held together amidst the uncertainties of rapid technological and economic change. And though he acknowledges many limitations from a modern perspective in the efforts made in that era, he hopes for a similar attempt today.

The prescription is, unhappily, not very convincing to me. The one question Putnam doesn’t ask or answer in this exhaustively argued volume is: who benefits from our increasing atomized isolation from one another? It seems pretty clear to me that today's winners -- the rich, the elites, the greedy -- have been doing very well in a society of unorganized and increasingly paranoid folks who do not even imagine they can collectively improve their environment. So I don't see many forces with actual clout that are going to lead US society in a different direction.

Changes along the lines needed require genuine re-evaluation of how we've allowed our lives to be structured, changes only likely to happen in the wake of massive economic dislocation (peak oil?), a losing war (got one of those, but so far a distant one), or other national trauma. We are all living now in the backwash of our right wing rulers' successful effort to deflect any such evaluation after 9/11. How much more trauma will it take?

Have you read Henry Milner's Civic Literacy? In large part it's a response to Putnam that attempts to expand the concept of social capital by focusing on civic literacy. He argues that people who have good information about the workings of their society and about issues tend to vote more and participate in civic life. He attributes the decline in civic literacy in the U.S. to an overall decline of functional illiteracy, and links the decline of American education in part to various economic issues.

I'm still working my way through the book, but I think it's a very interesting text.

Haven't read it -- sounds like something I should look at. In the same arena, though very specific, I always suggest Nonvoters by Doppelt and Shearer.

Just checked out Nonvoters on Amazon. Looks like it might be worth a trip to the library. An $88 price tag is too rich for my blood! :)

Have you read anything about deliberative democratic theory? It's how I stumbled kind of sideways onto Milner's book. Crazy thing about research, every step seems to just throw you into another, deeper pool.