First of a planned series on campaign paraphernalia.

This is a pretty low key election year in San Francisco. Mostly we've got incumbents planning coronations and other politicos going through campaign motions while scoping out their avenues for advancement when term limits kick in.

One of the fun things about San Francisco elections is that we believe in signs. Since we don't have lawns, we do window signs in quantity and signs on sticks taped to poles (in conformity with a sensible local ordinance which ensures that the clutter goes away afterwards.) 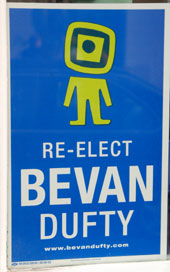 When I teach folks how to work on elections, I describe signs as "useful trinkets" -- something field staff should demand because trinkets reinforce the enthusiasm of your supporters. (Other parts of the campaign willl scoff at you and steal your budget for trinkets if you don't fight.) Signs, buttons, and bumper stickers aren't for changing minds. Trinkets promise your side that you've got the elusive, but invaluable "momentum."

Mostly I advocate simplicity in signs: text with one message, usually the candidate's name, and no frills but a recognizable design. Choose one, stick to it, and hammer.

Sometimes candidates attempt more and that's risky. Today's example shows why: what in the world was Bevan Dufty thinking portraying himself as a cockeyed computer monitor? Dufty is a "moderate" (that means pro-landlord) gay supervisor, an incumbent, likely cruising to victory. He used the same goofy sign image last time. 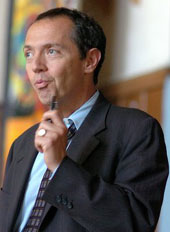 This time he has a straight woman opponent, Alix Rosenthal, running marginally to his left with backing from the tenant's union and some environmental groups. If I lived in the district (I live nearby) I'd vote for her, if only because I couldn't resist a candidate who proclaims " I want to keep San Francisco weird." Now that's okay with me -- the issue was whether to shut down the Castro district's annual Halloween party and free-for-all because too many straight outsiders come and pee in alleys. This impedes gentrification.

Yes, that's one of Bevan's ideas. You get the picture. Maybe Dufty likes his sign because it looks a little like him? Dufty photo courtesy of SFPartyParty.
Posted by janinsanfran at 5:31 PM

Wow you have done absolutely no research have you?
The logo Bevan is using is from the Aztec civilization. How did he come by it? His website will tell you that his mom ran a newspaper in harlem and that was the logo they used. Therefore he continues to use it to imbue her spirit in the campaign.

Also, for those of us who live in the Castro, Hallowween in the Castro does not equal an effort to stop gentrification, it equals a night when lawless citizens of points outside fo the Castro descend on the Castro to do more than urinate. They start gang fights, they break shop owners windows, they engage in random acts of lawlessness and use epithaphs we like "faggot" and beat up drag queens, behavior we residents left behind in Kansas.

SMS -- you are right. I did no research on Bevan's logo. Nor will most who see it.

Well we certainly wouldn't mind if a few faggots get beat up as long as we get to see the drag queens, right? We are in from Hayward for the night.