My great, great grandfather was a local leader of the bumptious U.S. 19th century bourgeoisie that founded the Republican Party as an anti-slavery force (those were the days!), won the Civil War and preserved the national Union, and enjoyed the fruits of subsequent "free labor"-based industrialization and commerce. Elbridge Gerry Spaulding founded a bank. He served as mayor of Buffalo, NY and in the U.S. Congress; he is credited with pushing through the wartime "green back" (paper money) scheme. Returning to Buffalo, he "lived long and prospered" in the words of the old toast. No record of who may have suffered for his prosperity has come down to me, but he certainly did well for himself. 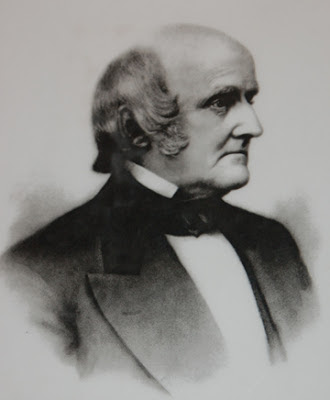 In 1875 he erected an ostentatious granite monument marking the 100th anniversary of the Battle of Bunker Hill in which his ancestor, Capt. Levi Spaulding and several sons had fought. 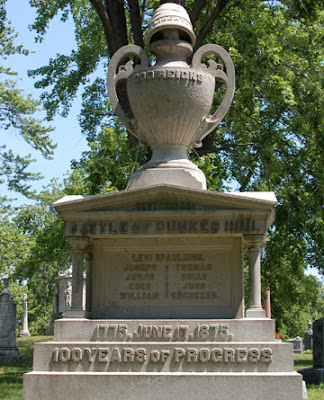 Confidently, it proclaims "100 years of progress". Those 19th century winners were nothing if not confident. 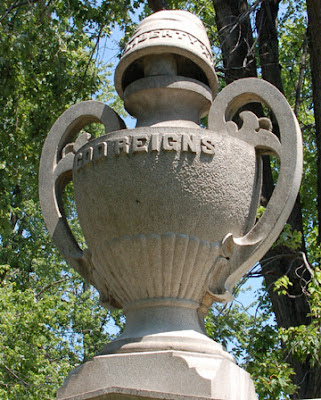 The monument is topped with a Phrygian Liberty Cap, an 18th century symbol of freedom, held aloft on a pole during the American Revolutionary War. (The French adopted the same symbol in their revolution.) The urn on which the cap is draped proclaims "God Reigns." No question about that in those days -- God, a Protestant father figure, I think -- was very much alive and on the side of these fortunate Americans. 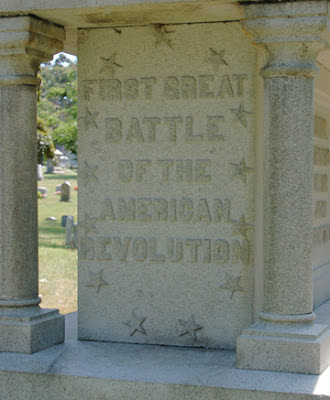 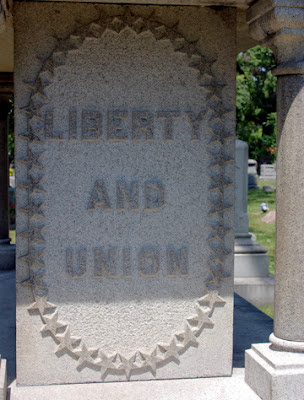 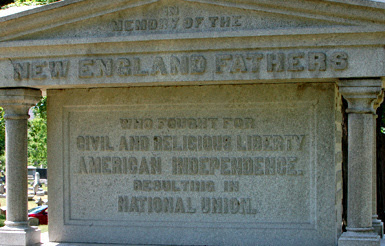 The rear inscription dedicates the monument to the "memory of the New England patriots who fought for civil and religious liberty, American independence, resulting in national Union." There's a lot going on here: perhaps he thought Buffalo still a bit of an upstart, frontier town, far from the true home of the Republic further east. Best to recall the homeplace of his iteration of the national myth. "Civil and religious liberty" apparently implied both national sovereignty and above all, the enduring Union for which his generation had battled. No, Spaulding didn't go to the war himself; he was a prosperous politician! But he certainly knew many who served and many who died; roughly 15,000 men went from Buffalo's county; 4700 of those became casualties. The Civil War was not a distant conflict.

On the base of the monument, my ancestor made sure that no one could dispute whose generosity had made possible this patriotic display. 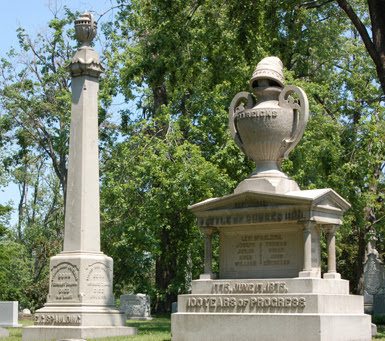 When E.G. Spaulding departed after a very long life (1809-1897), his own obelisk towered over the Bunker Hill monument. His descendants have scattered across the country, but he sure left some hefty stone to mark a time when patriotism sang the promise of a growing economy and an ever-expanding frontier. This was a patriotism both more grounded in material accomplishments and possibilities and perhaps even more effervescently absurd than the patriotism we endure today.
Posted by janinsanfran at 2:31 PM

Email ThisBlogThis!Share to TwitterShare to FacebookShare to Pinterest
Labels: democracy, gone but not forgotten, history