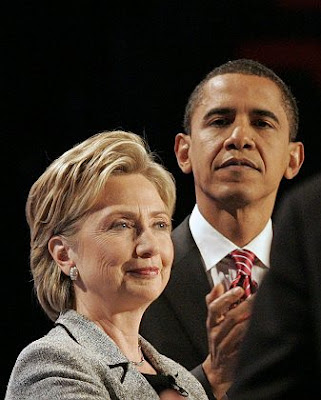 This morning Washington Post columnist E. J. Dionne commented on the shape of the vote in the Democratic primary in South Carolina.

In truth, Clinton and Obama both face electoral obstacles that would naturally confront any candidate seeking to break barriers of race or gender. The South Carolina exit polls showed each running well behind John Edwards among white men. While Obama won overwhelmingly among whites under 30, he secured only 11 percent of the ballots from whites 65 and older. He won 32 percent among white college graduates but only 16 percent among whites who did not have college degrees.

Note: it is possible to win a Democratic primary without any significant support from white men.

... like RFK, Obama has assembled an insurgent's campaign, strong among educated, affluent Democrats, energizing young voters, and simultaneously, exerting powerful appeal among African-American Democrats. That’s a formidable coalition, and one that no previous insurgent Democrat could manage. From McCarthy to Dean, minority voters have found earlier reformers cold. ...

In 2008, more than 40 states will hold primaries, awarding the overwhelming majority of the delegates. At the same time, blue-collar whites no longer form the dominant faction they long represented in Democratic Party politics.

The stirrings the Obama coalition points to have been at work in California for a couple of decades. It's worth looking at some of the history.

The California precedent
I first noticed the outline of a potential new progressive (Democratic) coalition in 1994, pouring over exit poll information [pdf] about votes cast in California against the specter of immigrants overwhelming the state (Prop. 187) on the one hand, and for Senator Dianne Feinstein on the other.

The outcome on Prop. 187 was lopsided: 59 percent for, 41 percent against. Fully 78 percent of the electorate was white (not Latino). The tiny 9 percent sliver of the electorate that was Latino voted overwhelmingly against Prop. 187 (73 percent) while Asian- and African-Americans split their votes about evenly, and most California whites supported the anti-immigrant measure.

Meanwhile, 1994 was the last election in which Diane Feinstein faced a real challenge. Hard as it is to believe now, the conventional stereotype of her was as "a San Francisco liberal" and, of course, what was still a novelty, a woman breaking a barrier for her sex. Her opponent, the conservative Republican millionaire and closet case Michael Huffington (Arianna was married to him then) darn near beat her in a race that ended up 47 to 45 percent. Huffington won among white men by a 58-35 percent margin. But although whites were the overwhelming majority of the electorate, Feinstein overcame that margin by running up huge advantages among people of color and a smaller margin among white women.

That Feinstein coalition -- huge margins in the communities of color coupled with a solid showing among white women -- has been the shape of the statewide Democratic majorities ever since. Ten years later, in 2004, people of color were a much larger fraction of the electorate -- up to 34 percent from 22 percent in 1994. And all groups of people of color were voting Democratic. Moreover, white women were also giving a large margin to Democrats. (Source: CNN exit polls.) The result: California was and is a solidly Blue state.

This has not happened because the electorate mirrors the state's demographics. It doesn't. In 2006, the Public Policy Institute of California reported how very different the racial, ethnic, age and economic situation of the population as a whole was from the slice that is the electorate:

California's electorate does not reflect the size, the growth, or the diversity of California’s population. Today, eight in 10 adults are eligible to vote but just 56 percent are registered, less than half (43 percent) belong to one of the major parties, and only 35 percent of adults can be expected to vote in the November election. Voter registration has grown at a slower rate than the population. As a result, 12 million of the state’s 27.7 million adults are not registered to vote.

Moreover, although the state has become increasingly diverse, the adults who frequently vote are predominantly white, age 45 and older, and relatively affluent. In contrast, nonvoters (those who are not registered to vote) are mostly nonwhite, younger, and less affluent than frequent (or "likely") voters.

Demographers tell us that the shape of the California electorate will change only very slowly to be more representative of its population. By 2040, people from Asian and Latin American backgrounds will constitute 63 percent of the people. Yet if these groups continue their present patterns of becoming citizens and turning out to vote, they will have a combined share of the state's voters of only 38 percent in the same year. (Source: Citrin and Highton.)

Somehow California voters, though not yet nearly representative of the state's future, have already adopted the direction that demographic change suggests they would be moving toward, even if sometimes by narrow margins. Though white men no longer hold sway in the California electorate, enough of them vote with the growing segment of the electorate that is not white to set a Democratic trend. White women vote heavily with the Democrats. A large segment of older white Californians recognize and honor the more diverse and also more economically insecure world their children experience. They consistently join with the folks who will be the new California majority to bring that majority into being before it really exists.

It looks to me as though the Obama candidacy is trying to birth a national coalition which, like the Democratic one in California, doesn't quite have a secure demographic base though such a base seems visible on the horizon. This coalition must, at present, attract enough support outside its obvious members to win an election. Naturally, its leading edge is young voters, folks who live closer to that diverse and difficult demographic future older folks can envision but do not so nearly inhabit.

As Schulman notes, Obama is not the first to try this. In addition to RFK, it's only fair to mention Jesse Jackson in 1988 -- at the end of 2008, will Obama have exceeded Jackson's total of wins in 11 states? That seems no sure thing at the moment.

A long-term national progressive coalition must somehow hold together most African Americans, most Latinos, probably the majority of various Asian-origin voters, and enough whites, probably predominantly female, to make a majority. Either Obama or Clinton has a very good shot at doing that in the general election. In the primaries, the lines where fissures open in that coalition -- who feels spoken to, who turns out, and who is energized -- will determine who gets to chase the big prize.

Posted by janinsanfran at 7:53 PM

Very interesting observations, thanks for putting this together.