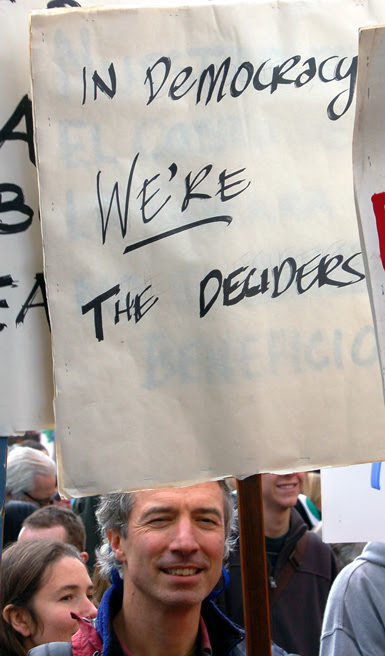 Part Five of a chronological look at the phases the contemporary U.S. peace movement, originally developed for the Historians against the War conference held in Atlanta in April. Part One. Part Two. Part Three. Part Four.

Lessons: 2001-2008
So here we are: on the one hand, we, the peace movement, have won. Majorities of us clearly have had it with imperial wars. Young people are especially clear:

Five years into the Iraq war, only 11 percent said terrorism and war would be the biggest problem the younger generation will need to address over the next 20 years, coming in fourth place behind economic problems (34 percent), environmental problems (18 percent) and the education system (13 percent).

And nevertheless, our rulers are determined to go on.

[Secretary of Defense Robert] Gates describes our war-fighting future in this way: "What has been called the 'Long War' [i.e. Bush's War on Terror, including the wars in Afghanistan and Iraq] is likely to be many years of persistent, engaged combat all around the world in differing degrees of size and intensity. This generational campaign cannot be wished away or put on a timetable. There are no exit strategies."

What does looking back over what has happened since 2001 tell us?

Making peace is long, hard work. The attacks of 9/11 gave our rulers an excuse to run with their wildest imperial ambitions. As my WarTimes/Tiempo de Guerras coworker Max Elbaum always reminds groups, stopping a empire in full charge is hard. Lyndon Johnson knew that Vietnam was not a war the U.S. could win before he made a major troop commitment. Yet that war dragged on another eight years. We shouldn't be kicking ourselves that we haven't stopped this one.

We need to build a movement based on what people really care about, not what we think they should care about. Sounds simple, but it isn't. There's a reason corporations and politicians do market research before they launch their campaigns. A peace movement doesn't do that; we seek to inject a value into public discourse, not ride existing values.

But we can look at what has really moved people to action and build from there. To that end, here's a short list of people who I've met in the course of my work and peace activities since 2001 who stand out for me as exemplifying activism that comes from deeply internalized values. All these individuals have created the ethos of the antiwar movement -- and been changed themselves by working within it. The peace movement may be stuck -- but these people are not stuck.

Our stumbling peace movement has tried to form itself alongside, but not so much inside, momentous changes in the generational/technological environment. And the peace movement has in some ways been more a spectator to these changes than a catalyst.

The open internet has created a vast arena in which a counterculture, mostly inhabited by people who don't remember 1968, thrive amid oppositional attitudes. And this population is far larger than the peace movement. Here's a description from within:

... I think what's happening is that [cultural norms he has outlined] are using a different narrative about the world than the one coming from elites and the media filter in general. That narrative is one where Bush is hated, people are basically the same in our instincts and desires, and the world is playful, messy, funny, and tragic all at once.

Narratives are incredibly powerful; they dominate our thinking and our culture. For instance, the metaphor of the war on terror is threatening our country's continued existence with its wrong-headed framing of all problems as requiring low trust centrally managed security theater. The production of a strong and consistent counter-narrative is the key to any revolutionary movement. Without a central story, a movement cannot grow and cannot wrap new people into it. ...

It seems like the internet's current form is dominated by liberals because it is liberals who acknowledge the basic messiness of the world around them and the lunacy of the establishment that runs it. The Iraq war didn't go as planned, the Clinton impeachment was crazy, and, oh yeah, peak oil is serious but why not use the phrase 'I drink your milkshake' to describe it.

That story wasn't being told anywhere, but it's the story of our time.

This can be read as more than a little fuzzy-wuzzy, and obviously there are millions who have no part of this cultural shift. But there are also millions who do and they are very much influencing adaptations in the Democratic Party and the Obama campaign that may determine who'll occupy the ruling seats next November.
***

In conclusion, I want to repeat something I brought up in Part One that Bill Quigley wrote in 2001.

"If our only response to the events of September 11 is to do what we did before that, but only harder, I think we will waste a lot of energy. We have to thoughtfully and humbly reconsider our strategies and develop some new ones. Otherwise we will just remain stuck."

Repeating what we have always done has not been ALL the peace movement has done, but it has been a great deal our activity. Meanwhile, mostly outside the peace movement, others have taken a stab at that necessity I quoted Bob Wing naming on Sept. 14.

I believe our main message should be that U.S. life will become increasingly insecure and dangerous unless this country improves its international behavior. In the era of globalization, peace at home is linked to peace abroad.

A more effective peace movement needs to be offering a vision of a plausible, sustainable global community that doesn't hinge on U.S. use of force to maintain empire. Elements of that vision clearly need to include challenges related to technology, climate change, and how to rein in cancerous capitalism. We really haven't known how to put out such a vision yet.

That's not surprising -- it is hard and perhaps, also, the struggle against empire may not have changed us enough so that we could see it. But the group(s) that find elements of that vision will discover that millions are already with them, looking for something similar, ready to elaborate something as yet unknown. They just don't currently identify with the peace movement.

Posted by janinsanfran at 2:03 PM

If you can get the bankers, the technologists and the scientists to get on the peace wagon; and if you can get corporate money invested in it, then peace movement may "start" enjoying the same kind of "capitalist" attention the environment is receiving now!

The US of A is intellectually dormant; to an extent that the word "elite" has negative connotation and disastrous ramifications!

Really excellent posts; thank you for taking the time to write them.