Back to the real world:
Descent into Chaos 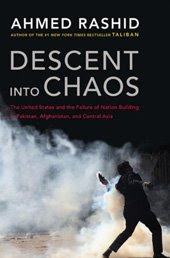 The debased politics of the United States certainly can make one question whether the rule of law or democracy can be sustained in a commercial communications environment. But until recently, the world did have a good-sized supply of true believers in these accomplishments of European civilization: the insurgent "western-leaning," educated classes of exploited and misruled former European colonies were some of the most ardent believers anywhere. For example, Vietnamese leader Ho Chi Minh is reported to have admired the U.S. Constitution -- until the United States committed itself to preventing the Vietnamese from choosing their own path.

Pakistani journalist Ahmed Rashid was another such believer whose trust has soured. His new book, Descent into Chaos, is both the record of his personal disillusionment and a meticulous, invaluable, chronicle of how the United States has destroyed hope for democracy and development in Afghanistan, the other Central Asian "Stans," and Pakistan in the years since 9/11.

Rashid, and many like him, thought the United States would have to side with freedom in his native part of the world.

Initially, it seemed that 9/11 assured that the world would address the social stagnation and state failure in South and Central Asia. ...Afghanistan had to be rescued from itself. Autocratic regimes in Pakistan and Central Asia had to change their repressive ways and listen to their alienated and poverty stricken citizens. Iran had to be made part of the international community. The West had to wake up to the realities and responsibilities of injustice, poverty, lack of education and unresolved conflicts such as those in Kashmir and Afghanistan which it had ignored for too long and which could not longer be allowed to fester. The West and democratic-minded Muslims had to help each other counter this new and deadly form of Islamic extremism.

The attacks of 9/11 created enormous trepidation in the region as America unsheathed its sword for a land invasion of Afghanistan, but they also created enormous expectations for change and hope for a sustained western commitment to the region that would lift it out of poverty and underdevelopment. Surely the 3000 American dead lying in the rubble n the Hudson as well as the others in Pennsylvania and Washington had not died in vain. Surely we would remember them not for the revenge that the United States was about to take on Al Qaeda, but for the hope that their deaths had brought to a neglected corner of the globe. Instead, seven years on, the US led "war on terrorism" has left in its wake a far more unstable world than existed on that momentous day in 2001.

The book is an exhaustive, pained narrative of the abysmal U.S. failure in Central Asia.

As the U.S. gets slowly booted from Iraq, this region is going to become the main zone of imperial conflict. Past performance ensures that the result will be bloody for the local population and probably fruitless for the NATO nations now embroiled there.

Ominously, today Juan Cole points out that with regard to the war in Pakistan/Afghanistan (yes, the U.S. is engaged in military action in both countries), "Obama looks closer to the thinking of the US officer corps in Afghanistan than does McCain."

If you want to know where your military is at 3 am, I cannot recommend Rashid's current book too highly.

Posted by janinsanfran at 7:46 AM

Thank you for your commentary on this book. I have seen it mentioned in editorials, but now that I have read your post I must get it.

This is yet another proof that the illegal war in Iraq was an extremely stupid thing to do and the consequences will be felt for a generation.

hi if pakistan survive 2 to 3 years then usa will be collapse same like ussr.thats why usa and her allies are in hurry to break pakistan wait and see.