Whatever is hidden will probably stay hidden

So we're about go through, again, what TPM Supreme Court blogger (and distinguished lawyer) Andrew Pincus calls the "Superbowl of Senate confirmations." Unless something very unexpected happens, Elena Kagan will almost certainly successfully run the gauntlet and then we'll forget about her until/unless she starts demonstrating influence on judicial decisions.

For a comprehensive, readable summary of "Where do we go from here," try this from SCOTUS blog. For the most thoughtful responses I've seen yet, try this from Jeffrey Toobin, a good friend of Kagan's who readily admits he doesn't know what she'll be like as a Justice. For what it is worth (nothing at all) I had the same reaction to the pick as Toobin: I too am reading David Remnick's Obama biography, The Bridge. Kagan's life trajectory reads to me like who Obama would have been if his ultimate ambition had been to be a Supreme Court Justice, for better or worse.

I have vivid memories of the prototype of a modern Supreme Court confirmation process. When Ronald Reagan nominated Robert Bork, the candidate did what no one does nowadays: he answered questions about his judicial philosophy publicly for days on end, or so it seemed. The Judiciary Committee hearings were broadcast live in their entirety. As it happened, I was working alone at various construction tasks in an empty basement -- I never had to turn it off and I didn't. It was wonderfully educational. I didn't like Bork: he sounded to me like someone who used his intelligence to make up half-baked rationales that forbid the legal system from attempting to deliver equity and justice. 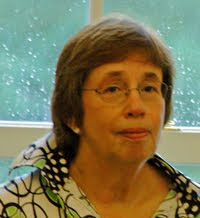 We don't get that kind of seminar on U.S. jurisprudence anymore. A couple of weeks ago, retired New York Times Supreme Court reporter Linda Greenhouse (pictured) shed some light on a fascinating question that it seldom occurs to us to ask: why do other developed democratic countries not see the kind of nasty, "toxic" confirmation battles to their highest courts that we have? After all, Canada legalized gay marriage for the whole country years ago by the equivalent of a Supreme Court order. Their court doesn't shy away from social controversy.

Greenhouse had some interesting perspectives. All nice, but not our system.

Today Greenhouse has another Opinionator piece lamenting that we can't expect to get substantive discussion of legal matters during Kagan's confirmation process.

We have waited a long time for a nominee willing to give answers.

Too bad it probably can't happen. We might all learn a lot.

Email ThisBlogThis!Share to TwitterShare to FacebookShare to Pinterest
Labels: democracy, rule of law