Yet another anniversary of upheaval 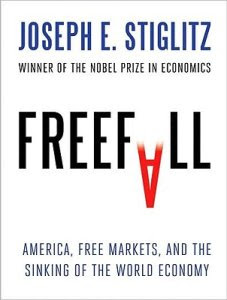 We've just been reminded that on 9/11/2001, "everything changed." But Joseph Stiglitz makes the case that 9/15/2008 is the date that really will seem pivotal when historians look back at this decade. On that date, the collapse of Lehman Brothers signaled that the organization of the world economy as we had known it wasn't working anymore.

Among all the books I've read describing the mistakes, misdeeds and malarkey that got us into the current Great Recession, Stiglitz' Freefall: America, Free Markets, and the Sinking of the World Economy is the most ambitious and comprehensive. The 2001 Nobel economics prize recipient, former World Bank economist and professor at Columbia takes an very expansive look at what's wrong and what might be done about it. This book is too big for a quick summary (and I'm underqualified to write such a thing) but I can share what I found so appealing about it, in addition to the fact that it is written to be read by general readers. Stiglitz hopes we can make the country work again, though doing so will require applying old ideals within a new economic reality. And ultimately our problems are political. Here's how he summarizes this:

Every game has rules and referees, and so does the economic game. One of the key roles of the government is to write the rules and provide the referees. The rules are the laws that govern the market economy. The referees include the regulators and the judges who help. enforce and interpret the laws. The old rules, whether they worked well in the past, are not the right rules for the twenty-first century. Society has to have confidence that the rules are set fairly and that the referees are fair. In America, too many of the rules were set by and or those from finance, and the referees were one-sided. That the outcomes have been one-sided should not come as a surprise.

... In the end, the only check on these abuses is through democratic processes.

... Dealing with this crisis -- and preventing future crises -- is as much a matter of politics as it is economics. If we as a country don't make these reforms, we risk political paralysis, given the inconsistent demands of special interests and the country at large.

...we have no choice: if we are to restore sustained prosperity, we need a new set of social contracts based on trust between all the elements of our society, between citizens and government, between this generation and the future.