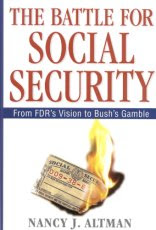 Since Social Security is likely to be on the chopping block this political season, I thought I'd better learn something about it beyond my casual impressions. The accessible book seems to be Nancy J. Altman's 2005 work, The Battle for Social Security. She tells the history of the program clearly if a little drily; I will probably write more about how she explains the program when I've finished the book.

What isn't so dry is the tale of the hissy fits thrown by the opposition to enacting an insurance program for elders at every stage of the legislative and political process. Depression-era Republicans foresaw terrible consequences if government stepped in to help old people:

Representative John Taber (R-N.Y.) speaking in support of the Treadway motion, charged, "Never in the history of the world has any measure been brought here so insidiously designed as to prevent business recovery, to enslave workers and to prevent any possibility of the employers providing work for the people." Representative Daniel Reed (R -N.Y.), who in 1952 would become chairman of the Ways and Means Committee, also spoke: "The lash of the dictator will be felt and 25 million free American citizens will for the first time submit themselves to a fingerprint test." Representative James W. Wadsworth (R-N.Y.), added his thoughts, "This bill opens the door and invites the entrance into the political field of a power so vast, so powerful as to threaten the integrity of our institutions and to pull the pillars of the temple down upon the heads of our descendants."

The Roosevelt administration's painstakingly designed plan was denounced over the conservative talk radio of the day by Fr. Coughlin. Altman points out that Coughlin's CBS radio show, the Golden Hour of the Little Flower, "had a larger share of the listening audience than today's Howard Stern, Rush Limbaugh, Paul Harvey, and Larry King put together."

There was a (sadly familiar) strain of crazy zeal in the opposition to Roosevelt. Organizations claiming to be outside the political parties threw themselves into his re-election campaign.

The American Liberty League wanted desperately to defeat Roosevelt. In 1935, the league spent twice as much in this pursuit as the Republicans. Among other efforts to discredit the president, the league prepared and widely distributed pamphlets comparing Roosevelt to Stalin, Hitler, and Mussolini. Some of Roosevelt's initiatives were fascist; others were communist. Social Security was, the pamphlets proclaimed, "the end of democracy."

William Randolph Hearst's newspapers knew they couldn't directly stop the old age insurance initiative, but they could claim they had a better idea -- and make the Republican candidate for President Alf Landon tow their line.

"... Social Security 'must be along AMERICAN lines,' unlike Roosevelt's program, which will "reduce millions of Americans to the condition of 'STATE PARASITES.'" The editorial further made clear that Landon would never support legislation "based on COLLECTIVIST DELUSIONS or that is plainly UNCONSTITUTIONAL."

It's interesting to see that print publications of the 1930s used the same convention of all caps to indicate shouting as internet forums do today.

Landon went down to defeat in 1936, still whining about the intrusions that the Social Security program would inflict on the people.

Landon asked, "Imagine the field opened for federal snooping. Are there 26 million going to be fingerprinted? Are their photographs going to be kept on file in a Washington office? Or are they going to have identification tags put around their necks?"

These historical oddments make it clear that the howls we're hearing out of DC Republicans, media celebrities peddling resentment, and the Tea Party have been around for a long time. Experience with Social Security and Medicare doesn't seem to moderate whatever anxieties underlie them. More calculating entities, like corporate medicine and insurance companies that profit from the status quo, exploit them still.

I have sympathy with President Obama's instinct to tell people to just calm down -- clearly the country needs, again, a good dose of that. But he also needs to call out the entities that stir this pot of chronic anxieties to enhance their own power and profits. It would be great to hear from him occasionally the sort of thing Roosevelt was able to say at his second inaugural:

Posted by janinsanfran at 8:35 AM

The similarities are amazing. I'm off to read Nancy's book. Thanks for the tip.