Derrick Bell and the "life of riches" 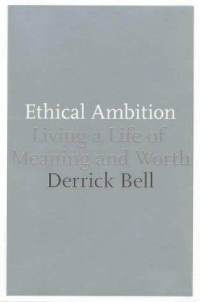 Bell was a controversial guy, probably best known popularly for giving up a tenured professorship at Harvard Law School in protest of the school's failure to hire a black woman on the career track. He often wrote about the law in parables, for example in Faces At The Bottom Of The Well: The Permanence Of Racism. The unusual accessibility of his writing seems to have rendered him a curiosity and often an irritant in legal academia. The swirl of conflicting interpretations he set off has outlived him: I have not linked to his Wikipedia article because the detractors seem to be carrying the day there. Bell's friends need to get into the online encyclopedia and clean up the entry.

I was moved by news of Bell's passing to find a copy of his musings on the significance of it all: Ethical Ambition: Living a Life of Meaning and Worth. This is a gentle book, as much a humble examination of the human fallout from brave acts of integrity as a stern manifesto from a determined prophet of racial and gender equality.

Bell knew that working for justice meant being an outsider -- a perception that runs against the grain for most of us and requires some courage and honesty to hold on to.

Ethical work often involves gleaning in the vineyard of injustice while trying to make things better. It is often difficult, unpopular, and unappreciated, but it can be self-sustaining. Persons working for social reform most often put in long hours and accept much smaller salaries than do those in big business. Their compensation is in the work itself.

He set the kind of standard for himself that can seem self-righteous.

Sometimes I was angry at those in power, but it was not anger or vengeance that motivated my speaking out or taking action. In a sense, it was fear: I was genuinely afraid that my tacit acquiescence to decisions I thought wrong would undermine my willingness to risk criticism, alienation, and serious loss to do what I thought right.

Over a long life, he came to understand how he might appear to others.

The description under my photograph in the class book prepared at the end of the first year [in law school] reflected what my classmates perceived as my lack of concern for the feelings of my classmates. It read: "Derrick Bell. Knows everything and wants everyone to know that he knows everything." I am sad to say that, at the time, I considered it a compliment.

Long experience in trying to make changes taught Bell that, however right we may think we are, and however "sophisticated" our analysis of wrongs and policies has become, we need to be able to re-examine our practices. In particular, he came to wonder whether his work for school desegregation in southern communities really served the educational interests of poor black families who just wanted better education for their kids, not so much or only integration with whites.

Without a willingness to continually critique our own policies, question our own motivations, and admit our own mistakes, it is virtually impossible to maintain programs and practices that are truly ethically related to the real needs of those we wish to serve. As I learned from sad experience, it is all too easy to become so committed to ideals and goals that we fail to notice when our clients' interests and goals no longer coincide with ours. ...

There's a Buddhist saying to the effect that you need a raft to cross a river, but once you've crossed you don't keep the raft with you. Because the struggle to improve conditions for people without money or power is so tough -- like crossing a very swift-running river -- those making the effort burden themselves by equating commitment with a rigid adherence to policy positions that may have worked at one point, but because of changed conditions are now no longer effective. Reform organizations and their leaders become identified with pursuing change through a particular set of tactics. We reason that we are in the right, that the forces we oppose are in the wrong, and any deviation from policies adhered to over many years will be seen as lack of commitment, or a concession that we were wrong all the time. …

I am much drawn to this way of thinking (though I have inadequate knowledge of the particulars to know whether I agree with Bell's critique of his own work.) Progressives strive so hard to understand what is wrong in society and to formulate tactics to try to remedy it that we can get fixated on acting in ways that were useful in particular situations but become just more impediments when circumstances change. We fail to swing our attention to pressing new emergencies. We've been seeing that over the last three years of Recession and revealed economic inequality: after years of fighting battles for equity in the realms of race, gender and sexual orientation, it took new folks in the Occupy movement to give us a notion how to frame for the 99 percent of who need more economic justice. Thank goodness for the creativity of the people running ahead of the honest limitations of their "leaders."

Bell was not a man who thought there were easy answers -- but he couldn't live any way except "ethically" by his own lights.

The predictable outcome of efforts for human justice across history has been built on courageous manifestations of faith far more than preachments or promises. It has required a commitment to a cause and an engagement in that commitment quite like that so many black people in America have been doing since slavery: making something out of nothing. Like the dispossessed in all times, these individuals carved out a humanity for themselves with absolutely nothing to help -- save imagination, will, and unbelievable strength and courage. …This is a philosophy of life that is easier to praise than to emulate. It is an outlook perhaps only available to those with the always hard to accept perception that life is a gift that can be revoked at any time and that, at some point, will come to an end. And at that end, we know our, work will not be completed. Perfection will have evaded us as it has for all who came before us. If there is satisfaction, it must come from our striving toward that vision of a better world. …

Keep in mind, activism does not equal martyrdom. Some activists have certainly been martyrs to their causes, and we appropriately give them our attention. They merit our respect. They are, in most times, the exception, not the rule. It thus bears repeating: an ethical life is not a life of sacrifice. It is, in fact, a life of riches. The riches may not always, or even often, be material, but the satisfaction of choosing ethically enriches the fabric of our daily lives in ways we might otherwise have thought impossible.

You really must stop reading or, at least, stop writing about the books you're reading. I keep needing to add them to my list. Funny about this one is that it well fills the need I've been pondering on.

When I turned 70 last spring, I decided that from here on out every day is a gift. Yeah, I know longevity tables give me more time, but although I am healthy now, I was a smoker for many years not to mention that luck (good and bad) plays a large role in the date of our demise.

So I've been thinking that I need to decide how I want to live - ethically, morally, personally - for whatever time I have left - or at least give it more thought than I have in recent years.

Me being me, that means I need to do some research to find some useful texts to inform my thinking. Whether I live another day or 20 years, I suppose this will be an ongoing, ever shifting project, but I hadn't found a starting place. Now you've given that beginning.

With Bell, I think this means there are three books from you on my list just in the past couple of weeks. Could you hold off for awhile...

Thank you for reminding me about Derrick Bell. Yet another addition to my library want list. Ronni Gilboa