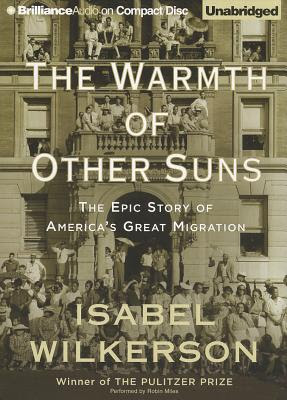 I loved this book. Isabel Wilkerson's The Warmth of Other Suns: The Epic Story of America's Great Migration makes the case that Southern black migrants from the rural U.S. South to the urban North between 1914 and the late 1960s should be seen as following an immigrant path just as much as various Europeans or Latinos from south of the border. They were escaping privation and oppression in the Jim Crow states of the old Confederacy; they flocked to hard and sometimes humiliating conditions in their new homes; and they gradually made their peace and their places in their new homes.

Of course they were also different from other migrants to this new world, since their slave ancestors had often arrived before most of their white neighbors and even been the first builders of cities that became their new homes.

Wilkerson follows the story of three individuals: Dr. Robert Joseph Pershing Foster who escaped rural Louisiana, first to join the Black bourgeoisie in Atlanta as a Morehouse man, then to Los Angeles to play the part of the jaunty high roller he'd aspired to be; George Swanson Starling who escaped lynching in the Florida orange groves to become a railway porter who raised a family in New York City; and Ida Mae Brandon Gladney who left sharecropping in Mississippi to raise a family in industrial segregated slums in Chicago. Wilkerson's telling of the life stories of these representative figures is vivid, personal, and utterly gripping.
***
A few years back I was hired to write a paper for a think tank that was interested in how new immigrant populations might come into their own as participants in the political process in their new country. I wish I'd had Wilkerson's book then -- her description of how Ida Mae Brandon Gladney became a voter in Chicago is exactly what my research and experience tells me is needed to get newcomers involved.

Ida Mae didn't know what was at stake, but suddenly everyone around her was talking about something she'd never heard of back in Mississippi. The precinct captain for her area, a Mr. Tibbs, had been out in the neighborhood rousing the people to register for the upcoming election. She had seen him and gotten the slip his workers handed out and was curious about all the commotion.

Back home, no one dared talk about such things. She couldn't vote in Mississippi. She never knew where the polls were in Chickasaw County. … Nobody she knew had even tried to vote. Nobody made note of election day whenever it came. It was as if there were an invisible world of voting and elections going on about its business without her.

Now it was 1940, and she was in Chicago. All around her were new arrivals like herself who had never voted before and were just getting the hang of elections after a lifetime of being excluded. Suddenly, the very party and the very apparatus that was ready to kill them if they tried to vote in the South was searching them out and all but carrying them to the polls. To the Democrats in the North, each new arrival from the South was a potential new vote in their column. …

Chicago was a Democratic town, and the Democrats had the means to make the most of this gift to the party. They were counting on the goodwill Roosevelt had engendered among colored people with his New Deal initiatives. Still, the precinct captains took no chances. They went door-to-door to talk up the New Deal and to register the people. They asked them about their kids and jobs and convinced them that the Democrats in the North were different from those in the South. They printed up party slates and passed out palm cards- --political crib notes that would fit in the palm of the hand -- so the people would know whom to vote for when they got inside the booth.

On election day, Ida Mae walked up to the fire station around the corner from her flat at Thirty-sixth and Wabash to vote for the first time in her life. The sidewalks were teeming with volunteers to usher neophytes into the station and to the correct sign-in tables. Inside, election judges, clerks, a policeman or two monitored the proceedings.

Ida Mae was not certain what to do. She had never touched an election ballot. She walked in, and a lady came over and directed her to where she should go. Ida Mae stepped inside a polling booth for the first time in her life and drew the curtain behind her. She unfolded the palm card she had been given and tried to remember what the lady had told her about how to punch in her choices for president of the United States and other political offices. It was the first time she would ever have a say in such things.

…What was unthinkable in Mississippi would eventually become so much a part of life in Chicago that Mr. Tibbs would ask Ida Mae to volunteer at the polls the next time. She had a pleasant disposition, and Mr. Tibbs put her to work helping other people learn how to vote. She would stand outside the firehouse, directing newcomers who were clutching their palm cards and looking as puzzled as she had been her first time at the polls.

…'The ballots cast by Ida Mae and other colored migrants up from the South were enough to help give Roosevelt the two percent margin of victory he needed to carry the state of Illinois and, by extension, the United States -- to return him to the White House.

That's still how coming into the process works today, now with new arrivals more than internal migrants. I've organized voter registration at new citizen swearing in ceremonies, sent multilingual canvassers out to immigrant neighborhoods, tried to establish the habits of participation that make for full incorporation in our electoral system. I find that older African Americans, the children of the Great Migration that Wilkerson chronicles, still place a special value on their right and duty to vote.
***
I did come away from this wonderful book with one quibble. Wilkerson does a good job at making clear the differences between the experience of white southern and eastern European newcomers and blacks who were part of the Great Migration.

On the face of it, they were sociologically alike, mostly landless rural people, put upon by the landed upper classes or harsh autocratic regimes, seeking freedom and autonomy in the northern factory cities of the United States.

But as they made their way into the economies of Chicago, Detroit, Cleveland, Milwaukee, and other receiving cities, their fortunes diverged. Both groups found themselves ridiculed for their folk ways and accents and suffered backward assumptions about their abilities and intelligence. But with the stroke of a pen, many eastern and southern Europeans and their children could wipe away their ethnicities -- and those limiting assumptions -- by adopting Anglo-Saxon surnames and melting into the world of the more privileged native-born whites. … A name change would have had no effect in masking the ethnicity of black migrants like Ida Mae, George, and Robert. It would have been superfluous, given that their surnames, often inherited from the masters of their forebears, were already Anglo-Saxon. They did not have the option of choosing for themselves a more favored identity. …

And so their experiences came to seem unrecognizable to too many of each set of people.

Wilkerson repeats several times that, because the war prevented cross-ocean travel, World War I (1914-18) opened industrial jobs to black migrants that previously would have been filled with Europeans. But she never discusses the fact that opportunities in factory labor for poor Europeans might have revived after that war if the United States had not adopted extremely restrictive immigration laws in the 1920s. The demand for industrial labor continued as industries expanded -- the hardest and dirtiest of the new jobs became the domain of southern black migrants. The shape of the Great Migration almost certainly was influenced by restrictionist and nativist policies that (probably inadvertently) benefited African Americans.
***
Isabel Wilkerson has written a book that should be read in every school in this country if we are to aspire to know who we are. It probably won't be. In our "post-racial" era, we mostly don't want to know.

But I suspect generations of African Americans will periodically rediscover this book and see in it their own almost forgotten family histories. I certainly hope that is true.
Posted by janinsanfran at 6:00 AM