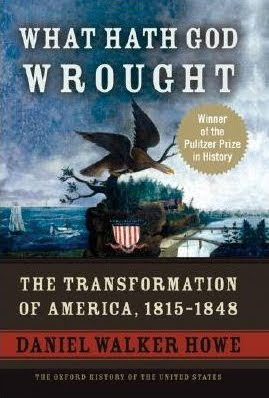 A communications revolution is the underlying theme of historian Daniel Walker Howe's volume covering the years 1815-1845 in the Oxford History of the United States: What Hath God Wrought. The title phrase is what inventor Samuel F. B. Morse tapped out as the first long distance demonstration of his brand-new telegraph. Along with canals, railroads, turnpikes, newspapers, and the Post Office, the new means of interacting changed society, religion and human horizons in what was still a new, vast and deeply experimental democracy.

This is not the most tightly drawn narrative among the volumes of the monumental Oxford History that I've read. Howe sometimes seems to jump from topic to topic, offering a dab of economic history here, a literary tidbit there, mixed with a smidgen of expansionist early American imperialism as a side dish. I suspect that 30 years from now this volume may seem anachronistic, a reading of this slice of early United States history extremely resonant of the concerns of the first decade of 21st century during another communications revolution, but perhaps missing other not currently obvious unifying themes. But that's just an intuition; I nonetheless was gripped by the variety interesting information Howe offers and will be sharing some some over several posts.

Here's an introductory sample of the sort of observation that makes this such an insightful commentary on the present:

In 1837, Emerson had published his ode for the monument to commemorate the Battle of Concord "Here once the embattled farmers stood / And fired the shot heard round the world." The memorable lines were hyperbole -- the sound of the American Revolution resonated around the Atlantic but not the Pacific.

James Marshall's discovery of gold in the Sierra had a better claim to triggering an event in global history. California was the first state to be settled by peoples from all over the world. (Indeed, it remains the most ethnically cosmopolitan society in existence today.) Endowing an occurrence in such a remote place with global historical consequences were the nineteenth-century developments in communication: the mass newspapers that publicized the finding, the advertisements that sold equipment and tickets, the increased knowledge of geography and ocean currents, the improvements in shipbuilding. Although the travel times to California seem long to us, the Gold Rush of 1848-49 represented an unprecedented worldwide concentration of human purpose and mobilization of human effort.

To those who lived through it, the well-named "Rush" seemed a dramatic example of the individualism, instability, rapid change, eager pursuit of wealth, and preoccupation with speed characteristic of America in their lifetime. It also testified to the power of hope, and hope built the United States.

That is, according to Howe, our state, so recently seized from Mexico in an aggressive war of choice, was already in 1848 playing the role it still often fulfills -- exploring the cutting edge of technological and human invention. Then as now, the rest of the world looked on in mixed envy, delight and horror -- and then often emulated us. I wish he'd given a citation for the assertion that California is still the "most ethnically cosmopolitan society in existence" -- not that I can name a rival off the top of my head.

It's never boring being a Californian.
***
Further posts about this monumental book will take up Howe's depiction of pre-Civil War politics (these folks invented political parties and mass democracy) and their religious enthusiasms and conflicts. Like Howe, I find his subject matter too broad for a simple, short entry.
***
Other volumes in the Oxford History I've written about here include: Empire of Liberty and Freedom from Fear.
Posted by janinsanfran at 5:00 AM