Extractive or inclusive; vicious or virtuous? 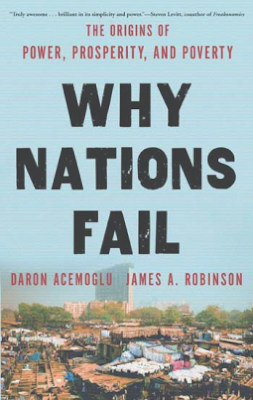 When I was growing up, economic and political development was supposed to involve a linear march toward riches and progress. Think W.W. Rostow's stages of growth. Nowadays the more apt metaphor seems to be a circle, vicious or virtuous.

James A. Robinson and Daron Acemoglu's Why Nations Fail: The Origins of Power, Prosperity and Poverty is one of those "big books" -- an attempt to envision a grand unifying theory that the current of era of post-Marxist awareness that modern capitalism has kicked the Anthropocene into high gear necessarily evokes. I found it interesting and often persuasive, though, as with all such efforts, only time will tell how predictive their thinking proves.

Here's how the authors describe their project:

…we need a theory of why some nations are prosperous while others fail and are poor. This theory needs to delineate both the factors that create and retard prosperity and their historical origins. This book has proposed such a theory.

Our theory has attempted to achieve this by operating on two levels. The first is the distinction between extractive and inclusive economic and political institutions. The second is our explanation for why inclusive institutions emerged in some parts of the world and not in others. While the first level of our theory is about an institutional interpretation of history, the second level is about how history has shaped institutional trajectories of nations.

That's all pretty dense and abstract. Our authors eagerly apply their model concretely. Perhaps it's not surprising that they are pretty confident that they can predict what countries will be rich in coming decades:

…vicious and virtuous circles generate a lot of persistence and sluggishness. There should be little doubt that in fifty or even a hundred years, the United States and Western Europe, based on their inclusive economic and political institutions, will be richer, most likely considerably richer, than sub-Saharan Africa, the Middle East, Central America, or Southeast Asia.

On the other hand, they are also pretty sure that the continuing strength of extractive political institutions (arbitrary and corrupt rule by a self-selecting elite) ensures that China will reach a limit to the extension of its somewhat inclusive economic development.

…Even if Chinese economic institutions are incomparably more inclusive today than three decades ago, the Chinese experience is an example of growth under extractive political institutions. Despite the recent emphasis in China on innovation and technology, Chinese growth is based on the adoption of existing technologies and rapid investment, not creative destruction. An important aspect of this is that property rights are not entirely secure in China. Every now and then, … some entrepreneurs are expropriated. Labor mobility is tightly regulated, and the most basic of property rights, the right to sell one's own labor in the way one wishes, is still highly imperfect. The extent to which economic institutions are still far from being truly inclusive is illustrated by the fact that only a few businessmen and -women would even venture into any activity without the support of the local party cadre or, even more important, of Beijing. The connection between business and the party is highly lucrative for both. Businesses supported by the party receive contracts on favorable terms, can evict ordinary people to expropriate their land, and violate laws and regulations with impunity. Those who stand in the path of this business plan will be trampled and can even be jailed or murdered.

Though skeptical about China's potential to generate a virtuous circle in which inclusive economic and political institutions support each other, they are much more optimistic about developments in contemporary Brazil.

The formation of a broad coalition in Brazil as a result of the coming together of diverse social movements and organized labor has had a remarkable impact on the Brazilian economy. Since 1990 economic growth has been rapid, with the proportion of the population in poverty falling from 45 percent to 30 percent in 2006. Inequality, which rose rapidly under the military, has fallen sharply, particularly after the Workers' Party took power, and there has been a huge expansion of education, with the average years of schooling of the population increasing from six in 1995 to eight in 2006. Brazil has now become part of the BRIC nations (Brazil, Russia, India, and China), the first Latin American country actually to have weight in international diplomatic circles. The rise of Brazil since the 1970s was not engineered by economists of international institutions instructing Brazilian policymakers on how to design better policies or avoid market failures. It was not achieved with injections of foreign aid. It was not the natural outcome of modernization. Rather, it was the consequence of diverse groups of people courageously building inclusive institutions. Eventually these led to more inclusive economic institutions. But the Brazilian transformation, like that of England in the seventeenth century, began with the creation of inclusive political institutions. But how can society build inclusive political institutions? History, as we have seen, is littered with examples of reform movements that succumbed to the iron law of oligarchy and replaced one set of extractive institutions with even more pernicious ones. …

There are many parallels between [previous instances of] historical processes of empowerment and what took place in Brazil starting in the 1970s. Though one root of the Workers' Party is the trade union movement, right from its early days, leaders such as Lula, along with the many intellectuals and opposition politicians who lent their support to the party, sought to make it into a broad coalition. These impulses began to fuse with local social movements all over the country, as the party took over local governments, encouraging civic participation and causing a sort of revolution in governance throughout the country. … empowerment at the grass-roots level in Brazil ensured that the transition to democracy corresponded to a move toward inclusive political institutions, and thus was a key factor in the emergence of a government committed to the provision of public services, educational expansion, and a truly level playing field.

***
Short excerpts cannot do justice to this ambitious project. I hope these quotations have piqued interest.

I was fascinated by this thesis for use in thinking about how development occurs within nations when countries are treated as distinct entities. But I wondered how these authors' extractive v. inclusive frame worked in the context of a global system that exploits and exacerbates poor countries' internal contradictions to the benefit not only of rich global elites but also to some extent of the general populations of rich countries. There are many examples of transnational extractive institutional arrangements. Remember the WTO, the IMF, the World Bank? Can a framework so rooted in the experience of particular discrete states be usefully applied to the era of universal global capitalism? There are hints here, but the nation is the primary unit of analysis -- and possibly not the true way the planet is presently divided, if it ever was.

I read this book during the U.S. election campaign and couldn't shake the image of Romney as the slippery champion of extractive elites who promote their interests by way of the Republican Party. The book's frame describes these forces to a T. Republicans increasingly aim to interrupt the U.S. virtuous circle embodied in electoral institutions that maintain some measure of inclusive equality among citizens. It's not just attachment to patriotic hokum when progressives stick up for the democratic rights of all of us. Robinson and Acemoglu remind us that the decisions about what kind of country we are going to have happen in history -- there's nothing that ensures we'll keep our relatively inclusive economic and political institutions, though inertia helps. These inclusive institutions are worth defending and these authors would contend that organized collective defense can matter.
Posted by janinsanfran at 5:00 AM