Once upon a time -- that is when I had just moved to San Francisco in 1972 -- there was a messy, extended hole in the ground amid swaths of highway construction equipment and debris, that we were told was going to become the Army Street interchange off Highway 101, the main freeway through town. Another, then still newish, freeway -- Interstate 280 -- arrived from the south and ran through the adjacent area, leading nowhere but some empty lots southeast of downtown. It still goes nowhere much, but the nowhere much has gotten built out in recent years and is now called Mission Bay.

For years, as construction of the Army Street exit went on, there would be occasional newspaper articles about what gargantuan quantities concrete and steel were being poured into its construction. In 1974 some "hippies" (that means artists) started an urban agriculture and cultural hub, "The Farm," on the north side of it. The Farm endured in various forms through the mid-80s. The interchange may have finally opened the same year or perhaps a bit later. It served as the conduit for trucks bearing produce and materials to markets and industrial enterprises along the Bay. It had needed all that weighty steel as the tonnage coming through was significant.

After farmworker labor leader Cesar E. Chavez died in 1993, Latino and union activists campaigned to get Army Street, one of the broadest arteries through the Mission District, named after him. The move was controversial -- the "Army Street" name had neighborhood defenders. We even had to vote on a ballot measure to undo the change; "Cesar Chavez" won in 1995.

Then Caltrans -- the state's highway authority -- dug in its heels and refused to change the signs on Route 101 unless the city came up with $880,000 for the work. That wasn't happening, even in the relatively flush '90s, so we lived with contradictory signs for awhile until some accommodation was agreed on.

But for the last decade, "Cesar Chavez Street" has run uncontroversially between the Bernal and Mission neighborhoods and uphill into Noe Valley. (Yes, from the perspective of a Mission dweller, the Noe Valley is uphill.)

Under the enduring monster freeway interchange, homeless encampments come -- and are periodically swept away in police crackdowns. Day laborers wait for work on Cesar Chavez Street. The road is currently getting some overdue repaving and re-striping. For months it has been home to earth movers, barriers and occasional detours.

With all that history, you might think that Caltrans would have figured out how to spell to the name of the thoroughfare, but you'd be wrong. For the last week, we've been greeted by this flashing sign: 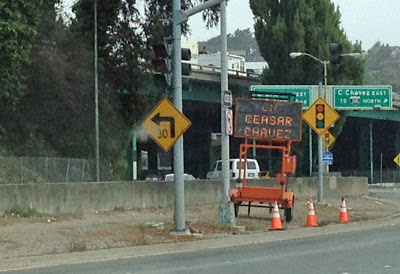 Hint to Caltrans: this is not about a salad or an emperor (even if misspelled), but the state's most prominent Latino labor leader …
Posted by janinsanfran at 5:00 AM