Uncovering and leashing the watchers, then and now 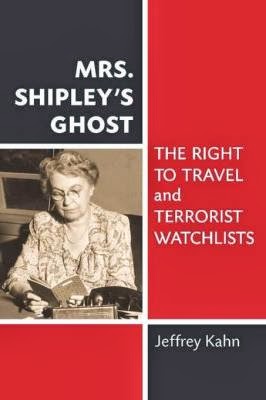 In Mrs. Shipley's Ghost: The Right to Travel and Terrorist Watchlists, Jeffrey Kahn, a law professor at SMU, tackles three tasks: narrating the history of US government controls on the people's travel, explicating the post 9/11 maze of "no fly" controls, and suggesting a more freedom-friendly legal regime than what frightened politicians and ever aggrandizing spook bureaucracies have wrought.

Looking back at US government watch lists, he has brought to light the regime of Mrs. Shipley. Her obscure office in the State Department decided which US citizens might be issued passports largely without any outside scrutiny from the 1930s through the 50s. Passports in that era were a novelty that only became essential for travel after World War I era controls somehow leached into the ensuing uneasy European "peace." Once the very idea of regulating individual's travel had emerged amid wartime fears, a government office took upon itself to decide which citizens might harm US interests by going abroad freely. Remembered victims include playwright Arthur Miller and the Communist singer Paul Robeson who were both denied passports, but there were thousands who found themselves so restricted, mostly anonymously.

Ruth Shipley was not a politician or even a political appointee. She was a civil servant who rose from the ranks of World War I era file clerks to become a force in Washington whom presidents praised and to whom senators paid obeisance. Franklin Delano Roosevelt called her "a wonderful ogre," which he intended as a great compliment. …Mrs. Shipley controlled travel by issuing, or not, what became a license for their travel: a passport. It was her job to decide who could go where, for how long, and under what conditions. On the day she retired, Mrs. Shipley's office had amassed files on twelve million people. …

As the anti-Communist paranoia of the 1950s receded, a series of legal decisions curtailed the arbitrary power of Mrs. Shipley's office; several of these were written by Supreme Court Justice William O. Douglas, who

in 1959, was obliged to write to Deputy Undersecretary of State Robert Murphy seeking his "personal consideration and if necessary to discuss with Secretary [of State] Herter and President Eisenhower" the Department's decision not to validate his passport for travel to China.

Kahn describes the contemporary watch list system -- the Terrorist Screening Center, the Terrorist Screening Database, and their offshoots -- as less personal and even less penetrable than Mrs. Shipley's regime. In the aftermath of the 9/11 attacks, officials charged with "security," felt exposed as failures and were determined never to let any danger slip past them again. All their incentives encouraged them to expand controls like a cancer.

After the information-sharing mistakes revealed by 9/11, there was considerable zeal to err on the side of overinclusion. Even as late as 2005, Justice Department auditors reported that the then-director of the TSC, Donna Bucella, told them that "to err on the side of caution, individuals with any degree of a terrorism nexus were included" on the consolidated watch list so long as minimum identifying data were available. … in late 2009, the Terrorist Screening Database contained the names of approximately 400,000 people.

The mushrooming lists quickly left the narrow regime of preventing threats to commercial flights and became an instrument of more general coercion. The various security agencies have taken advantage of their ability to prevent travel in order to bring pressure on, mostly Muslim, citizens they wished to investigate or recruit as spies among their communities. (I've chronicled the case of Air Force vet Saadiq Long and his is by no means the only such instance.)

[The] shift from corporeal form to digital avatar accomplished a neat trick, even if those who created the new system did not realize just who they had regenerated. There is no single Mrs. Shipley anymore. Her power was certainly not transferred to the singular discretion of the Director of the Terrorist Screening Center. But Mrs. Shipley's spirit did not entirely disappear. It has been diffused into the databases and computers of scores of analysts working in a systematic, multilevel process.

This makes decision making appear scientific, rigorous, and technologically sophisticated. Data points are parsed and assessed at different stages according to set criteria by dedicated professionals in the "watchlistiing community." The involvement of multiple agencIes with a stake in the results would seem to prevent any single person from amassing the power Mrs. Shipley did. What could be more objective and dispassionate?

… The new system makes it much harder to identify just who is responsible for the final decision to ground a citizen. …Officials in both eras have emphasized the careful vetting and professional judgment used in their departments. But the answer boils down to the same two words: trust us.

Ah yes: "trust us" -- there's President Obama's mantra in response to Edward Snowden's documentation of the NSA's vacuuming collection of our lives; we'll give you cosmetic reforms, we'll study it, but trust us. If the history is to believed, trust in authorities is a mistake unless those authorities are also forced to explain and verify, even when they don't want to.

Kahn goes on to propose that an unrestricted right to travel without government permission should be considered a basic entitlement of citizenship in a democratic state, subject to the strictest scrutiny before officials can use their power to infringe on it. I don't know whether his legal arguments have any future. The Ibrahim case is the latest instance in a string of court decisions that seem to point to a judicial willingness to put some limits on the spooks -- and to the courts' inability to get much more of a grip on the bureaucracy than individuals enjoy.
Posted by janinsanfran at 7:35 AM

It's been the way government has been for a LONG time. My husband's father told him in the 50s that the government knew anything they wanted about anybody. He worked in communications. Then remember the 60s and then how they went after the Smothers Brothers. Speak up and you found yourself being spied upon. There are so many abuses of power that never got redressed-- Like Randy Weaver. His family wasn't the only one mistreated by the ATF. Even David Koresh and the way they went after the Branch Dividians when they could have done it differently and not endangered the children they claimed to be trying to protect.

I don't honestly know what we can do about it as so many Americans either don't care or like it that way feeling it makes them safer. We elect someone who claims they'll change it but if they seriously tried, would they be killed themselves? It sounds scary to say that but it is scary :(

It isn't as if the Branch Davidians were covertly trying to overthrow the government! Let's keep our categories straight. Also, these incidents happened years ago under another administration, and I don't think god himself could have come up with a good solution for dealing with those nutbags and their hostages.
I'm in favor of letting people like that rot, as long as they don't pull others into their paranoid delusions, entrap helpless people or perpetrate violence.
What the above has to do with modern-day mass spying I don't know. These people you mention were not exactly under the radar. In fact, they were publicity hounds who wanted sympathy, money and people under their control.
They are still around, too. We have some prime specimens in my town, going on about Muslims and tax collectors.
Interestingly enough, we also have an NSA worker in our neighborhood! Wonder what he is thinking now.
BTW: Americans have rights and should exercise them. They also have duties, like paying taxes and abiding by the laws. That's not so hard to understand.

It's pretty well known that Koresh went into town, Hattie. I think the thing Jan wrote was about overreach of government but maybe I am wrong. What was wrong with what they did with Koresh is all the children that were murdered possibly by the Davidians, but if they had arrested him in town, none of it would have happened. I remember the day that happened, seeing the tanks around the compound and then the fire exploding. I don't have a lot events like that I can recall perfectly but that is one. The adults made their choice. The children did not.

And Randy Weaver suffered the fate of having the agents want him to testify and he refused. That led to the rest-- with his wife being killed by the sharpshooter. Maybe you don't think it relates but I do. The spying is nothing until they do something with it. And the ATF during those years had other homes they invaded by 'mistake'.

I could care less about them collecting my data if they don't turn around and misuse it-- and the fact that they have before is why we should care.