Hacks got to hack, part 2 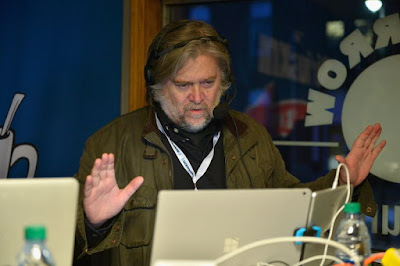 It's just as bad as it seems -- and not nearly so bad at all. That's how I respond to the news that the Mercer-funded, Bannon-led data manipulation/psychographic profiling company Cambridge Analytica used 50 million scraped Facebook profiles in the service of the Trump campaign. This sort of thing is not new. This particular bunch may be vile actors, but we're kidding ourselves if we see evil geniuses lurking here. Cambridge Analytica and their sponsors participated in a win; it's in their interest to claim all the credit they can seize. But nothing in the story I've seen comes close to proving this fraction of the Trump campaign put their guy over the top. In an election this close, it is probably impossible to tease out any simple variable that did the job. Everybody in the Trump menagerie can and will take credit.

Yes, Facebook enabled this. Selling us -- our interests, our concerns, our enthusiasms -- to businesses that want to sell us their thing (be that a commodity or an ideology) is what Facebook dines on. We're all hooked on having our lives integrated into the internet; if it weren't Facebook, it would be some other tech behemoth.

In campaigns, what consultants (hacks) sell to politicians is the promise that they know what messages should be delivered to which people in order to assemble that oh-so-elusive 50 percent plus one on election day. Elections seen from within campaigns are a tough and often nasty business. Voters can be motivated by hope -- or voters can be motivated by fear. Both approaches work although the latter is often easier to evoke.

Political consultants are utilitarians, drawn to whatever they think will work. They may have some limits, some scruples, about what urges they are willing to weaponize. But in the heat of the campaign, those can become strained. Whether the campaign draws any ethical lines in choosing a route to victory is usually a matter of laws and of decisions among top management -- or limits from the candidate. Ah ... we can begin to see where there might be a problem here ...

I've been there, up close. When I was working on an initiative in 2012, a vendor offered us a phone calling program that would enable us to make calls to Facebook friends of people from a dataset we had selected based on the usual sorts of variables like location, age, race, and voting history. This included a flashy presentation of technology which we were assured would be the next great new thing!

I thought then and think now that demographic profiling for commercial purposes makes variants of this inevitable. If we want to participate in online social media as it currently exists, this is the cost in privacy we pay. It's not just Cambridge Analytica, it's the web business model. How else to monetize us?

(In that particular campaign, the tech was attractive, but we decided not to go there, not out of privacy concerns, but out of a rational calculation that this approach wouldn't render a more well-targeted effort on the scale we could afford than much cheaper database management tools. It would have been a fun experiment.)

Karen Tumulty at the Washington Post offers the most interesting observation on Facebook/Cambridge Analytica that I've read:

It is far from clear whether Cambridge Analytica delivered any real results for Trump or whether it merely hyped what it could achieve with all this information. My hunch is the latter. But in some respects, this scheme represents the crowning touch for what has become a fetishization of data in politics — the idea that if you can just identify the right niches, and microtarget those people with a diet rich in what they already think, you win.

... Voters are sought based on what they watch, and what they click, and whether they get their caffeine from Dunkin’ Donuts or Starbucks. Push the right button and deliver to them the correct message — whether it is true or false, rational or unhinged — and they are yours. ...What’s lost when data starts driving politics is not only privacy — including that of 50 million Facebook users — but also an opportunity to make our politics more than the sum of its factions.

The headline to this post is a take on a previous post on a Democratic postmortem.
Posted by janinsanfran at 5:00 AM

I never believed social media caused the election to turn out as it did. I have right and left wing friends there. They each try to share memes that suit their agenda. I do a lot of hide posts and especially hide the source post permanently. I don't follow any political sites at FB but it's clear many of them do and as soon as they get there, they are bombarded-- then they try to bombard their friends. The thing is the same ones pass on what they already believe and I bet they hide what they don't (if any have opposite thinking friends). I've been unfriended by people on both sides when I tried to give an opinion that didn't gel with theirs. I think social media might make people think everyone thinks as they do and hence become more entrenched but changing minds? I doubt it.

I guess Obama's campaign bragged at how good they were at using these tactics of gathering data to find out who was open to their view. The thing that appears this gatherer did differently was use the friends of the one who had answered the app. Whether that benefit anybody politically is hard to say since some, like me, have friends on both sides, and routinely hide all political posts there-- because I am tempted to reply what I think and that rarely ends well ;)

As you say, if not FB, then some other actor. I don't put too much out on FB but I keep in touch with far-flung friends (many classmates of mine now live on the mainland).