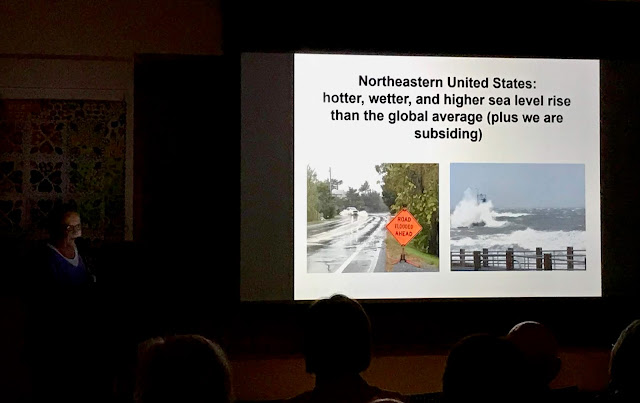 Last night I attended a packed meeting at the West Tisbury public library at which Elizabeth Durkee, the town of Oak Bluffs conservation agent, laid out what's foreseen for this island as the climate warms. The Island Climate Action Network (ICAN) is sponsoring a series of such meetings in this quiet season.

I expected to hear a lot about the dangers of rising seas, and I did. Many of the island's roads skirt the shoreline and may be inundated by more powerful storms and the ocean itself over the next few decades. Significant island infrastructure -- the ferry landings through which people and commerce flow and the only hospital -- are located in areas that will flood.

But as a Californian, I was struck by this which I much less expected: 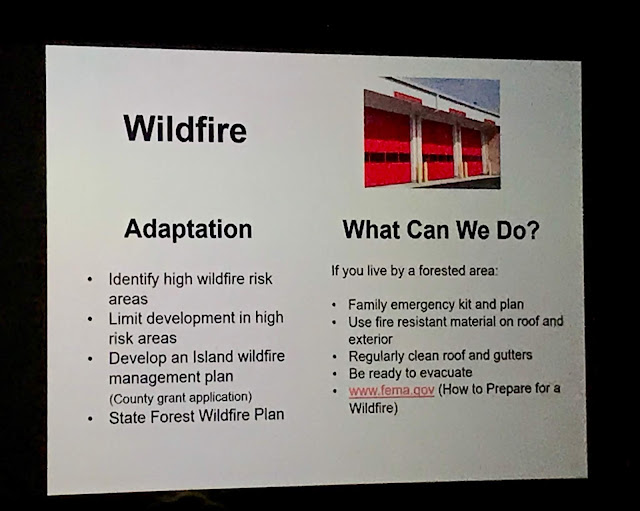 The wooded areas where I delight to run are very much at risk in years of drought according to town maps, as is this house. Accumulated dead wood in these wild forests creates acute fire danger. According to the Martha's Vineyard Commission website:

Climate change is bringing more periods of drought, i.e. extended periods of deficient water supply, punctuated by heavy rainstorms. This will increase the risk of wildfires, especially in the spring, before trees have leafed out. Wildfire could strike quickly with potential for great loss of life and property.

The Vineyard probably has more people and buildings at risk from wildfire than at any time in our history because of several factors:

It's not just California (and Australia) that can burn.
Posted by janinsanfran at 5:06 AM