So President Biden has quickly listened to the howls of his constituents and turned around since last Friday, promising to increase the cap on refugee admissions. That little democratic pressure exercise went well; let's keep the pressure on to assist refugees and add pressure for humane solutions to what will be an ever-swelling migration crisis.

Meanwhile, perhaps we need to create another immigration allotment for persons -- outside the refugee and asylum categories -- who should be entitled to relatively easy entry to the U.S.: people who can no longer live in their own societies and countries because of U.S. military adventures.

Michael Walzer  offers a suggestion prompted by our impending departure from Afghanistan:

When we leave, we must bring with us to the U.S. all the men and women, and their families, who are vulnerable to persecution, imprisonment, or death because of our invasion—directly, because they collaborated with us, but also indirectly, because they agitated for democracy, organized unions, or established schools for girls under our cover. It doesn’t matter whether or not we intended to provide this cover, though I think many Americans who went to Afghanistan wanted to do exactly that. This is an absolute moral obligation.

Probably a large number of the men and women at risk will want to stay where they are and continue their political struggle; we should make sure they have the resources we can provide. But any people who want to leave, whatever their numbers, should be taken along with our troops and diplomats. We should be preparing to welcome them when they arrive and help them settle in the U.S.

In the early days of the post 9/11 panic, federal spooks and law enforcement, having been caught with their pants down by the jihadi attacks on New York and the Pentagon, ran wild and dangerous. In addition to instituting security theater at airports, they went on an entrapment binge, rounding up barely assimilated, often half-witted, young immigrant Muslims in what they called terror plots. The feds got credit for protecting us; the pathetic terrorists went to jail for long terms.

It's time to re-examine that binge. Rozina Ali offers a piercing, sympathetic account of the characters and imaginary terror "plots" that came out of that time.

... sweeping legislation and policy changes cleared the way for the authorities to surveil whole communities, monitoring even those who had no connection to terrorism. Prosecutors were now able to build cases from invasive intelligence-gathering tactics that would have been restricted earlier. The U.S. attorney general allowed law enforcement to deploy informants from the earliest stages of a terrorism investigation, contravening the established practice of waiting until there was reasonable indication of criminal activity; the Justice Department further relaxed restrictions in later years, permitting such use of informants even when assessing a potential case. In trials, the government presented evidence gathered by paid civilian informants who latched onto low-income, vulnerable and mentally challenged individuals, urged them toward a plot and, in several cases, even offered money and supplies to carry out bombings.

... Since the Sept. 11 attacks, the government has imprisoned some 800 people on charges related to international terrorism, according to the Intercept database. But these numbers obscure a complicated reality. Many of these people were not found to have committed any acts of violence. Still, the government managed to achieve a high rate of conviction. Those accused of terrorism often pleaded guilty, usually because they were offered leniency in exchange for information, or because they knew they would almost certainly receive a longer sentence if they went to trial and were convicted. ...

Very much worth reading the whole story ... 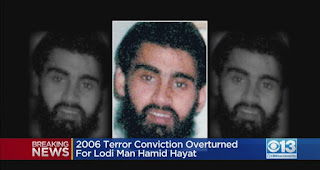 In California, one federal judge has already tossed the case against Hamid Hayat of Lodi, a particularly egregious example of law enforcement inventing a threat that wasn't there.

But hundreds of people remain locked up in federal prisons for thinly sourced accusations. Okay -- we were scared stupid for a season. But can we take a deep breath and look at freeing these people?

Posted by janinsanfran at 9:30 AM