Yes, this is apocalyptic -- and not a drill 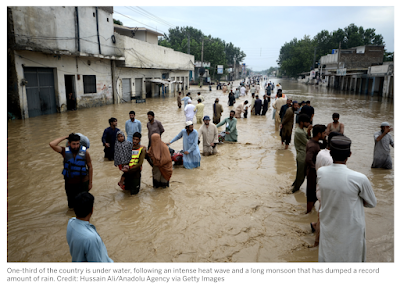 There's so much to worry about -- wildfires, hurricanes, domestic and foreign fascists -- to list a few immediate local threats. But we can't entirely look away from this:

By early September a third of Pakistan was under water. 40 million people, one fifth of the population are displaced, a third of the country was under water and more than half of its 160 districts have been declared “calamity hit”. A million houses have been destroyed or damaged. More than 160 bridges had collapsed or are severely damaged and thousands of miles of roads have been damaged. Hundreds of thousands of farm animals have died, and as many as 73,000 women are expected to give birth over the next month without adequate medical support. In some ways it was a miracle that only 1400 people have so far been declared dead.

It should be a world historic moment. At this point, our habit of talking about climate change as a future risk has once and for all, to stop. One third of the fifth most populous country in the world, one of the most sensitive geopolitical hotspots on the planet, is under water. 40 million people are displaced. The climate emergency has arrived. This is not a drill.

... The final tally for the current disaster is anyone’s guess at this point. If the 2010 floods that affected 15-20 million Pakistanis came to $10 billion, it would not seem unreasonable to set the tally this year in region of $!5-20 billion, which would be 4-5 % of GDP. For an economy already reeling under the impact of devaluation, power cuts, and high energy prices and the extreme heat earlier in the summer, which seriously impaired the wheat crop, it is another body-blow. Both rice and cotton crops are likely to be severely affected.

Even more urgent are the public health risks in a country a third of which has been underwater. Waterborne diseases — malaria, diarrhea, dengue - and apocalyptic clouds of mosquitos pose an acute risk. [My emphasis. By way of economist Adam Tooze, Sept 21, 2022]

The Scientific American explores "Why Are Pakistan’s Floods So Extreme This Year?"  The science is not simple, but deserves a read.

Posted by janinsanfran at 7:18 AM