Cure for an execution shortage 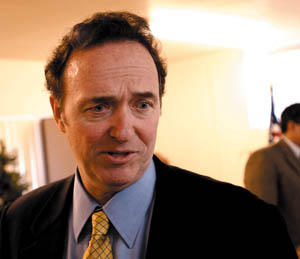 During the 1990s, Dan Lungren was the attorney general of California. He was such a clear right wing nutcase that the pathetic Gray Davis successfully painted him as "out of the mainstream" and crushed him in the gubernatorial election of 1998. So naturally Lungren went on to become a right wing Republican Congressman from a conservative southern California district in 2004.

Now he is back to his old tricks -- Lungren is leading a move to revamp the law to kill more people.

California currently has more than 640 inmates on death row; the state has executed just 11 murderers since restoring capital punishment in 1978. For Lungren (and some relatives of murder victims), that's not good enough. They seek to stop federal courts from reviewing state verdicts and speed convicts to execution, regardless of the quality of their trials. The San Jose Mercury News reports:

When Congress adjourned several weeks ago, it was on the brink of slamming the door on the ability of most death-row inmates and others to present new evidence to show their original trials were tainted by police or prosecutorial misconduct, or incompetent defense lawyers.
. . .
The unprecedented limits would come at a time when concerns are mounting about the fairness of the death penalty -- including examples of innocent men set free around the nation. Even some strong death-penalty supporters, from California's chief justice to former U.S. attorney generals, have expressed reservations.

"This is being rushed through with all sorts of disturbing ramifications,'' said California Chief Justice Ronald George, whose court consistently has upheld a higher percentage of death sentences than other state high courts around the country. "My fellow chief justices and I are all in favor of efficiency and speed, but the overall concern is with fairness."

Fairness certainly ought to matter. Since the death penalty was reinstated, at least five men in California have been sentenced to death that were either acquitted on the charge of murder or had their murder convictions overturned. These include Oscar Lee Morris in 2000, Lee Perry Farmer in 1999, Troy Lee Jones in 1996, Patrick “Hootie” Croy in 1990, and Jerry Bigelow in 1988.

Last fall, a group of 450 attorneys participating in the Conference of Delegates of the California Bar Association urged a moratorium on the death penalty in California until the state reviews whether capital punishment laws are enforced fairly and uniformly. "If you make a mistake, it's not like you can go back and correct a mistake because the person is dead," said Los Angeles County Deputy District Attorney Danette Meyers, a supporter of the measure.

Meanwhile in Sacramento, Assemblymembers Paul Koretz (D-West Hollywood) and Sally Lieber (D-Mountain View) introduced the “California Moratorium on Executions Act” (AB 1121). The act, if passed, would suspend all executions in California until January 1, 2009 while the California Commission on the Fair Administration of Justice conducts a thorough study of the state’s criminal justice procedures. Asm. Koretz declared, "For the state of California to continue to execute prisoners, while an official governmental body investigates the findings and allegations of error and justice and unfairness in the criminal justice system, just doesn't make sense." For more on this initiative, visit Death Penalty Focus.

I suppose it is too much to expect that a country which goes in for "pre-emptive" invasions will preserve such niceties as being careful who it kills through judicial processes, but one must hope . . .
Posted by janinsanfran at 9:09 PM