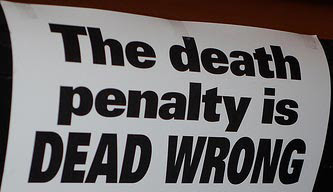 Congratulations to all the dedicated advocates who have worked for decades to end the death penalty in California, especially Death Penalty Focus and the ACLU. Gov. Gavin's moratorium certainly isn't the last word; there will be lawsuits trying to ensure the state kills more people. This remains a terrible way to get to this end -- through invocation of unchecked executive authority. We've seen that sort of move often enough and many of us didn't like it.

But for the moment, our 737 death row inmates won't have to face execution; a handful of vengeful county prosecutors can try to add to their number with new death convictions, but they are going to look like the terrible spendthrifts these officials are when they commit tax dollars to winning something unlikely ever to happen.

It's worth reflecting on why it has been so hard to get to this point. I bring to this the experience of working to replace the death penalty with sentences of life without parole by initiative in 2012. We fell two percentages points short; the state's tussle over permitting executions ground on and on.

California's death penalty law was put in place by a voter initiative in 1978; it can only be altered by another statewide popular vote. The legislature can't end death sentences, though it sure seems likely that the current majorities would repeal. (On the other hand, elected officials aren't heroes -- many probably like having this decision out of their hands.) Bob Egelko, who has been covering the issue for decades for the SF Chronicle, has assembled a thorough catalogue and discussion of Newsom's assertions in favor of his moratorium, all available at the link: Oddly, since Californians have continued to vote narrowly for the death penalty for a decade, what I learned in 2012 is that executions simply are NOT a high salience issue for voters. We haven't executed anyone since 2006 and it has long appeared that legal challenges meant we weren't likely to execute any of the current 737 condemned before they die of natural causes. The most common reminder of the death penalty for many of us would be a tiny news notice that yet another convict at San Quentin had died on the row.

There is a smallish fraction of us who are rabidly pro-death penalty -- perhaps 30 percent or less whose horror at vicious crimes seems to them to require social revenge killing. There is a similar size fraction, many religious, who experience the continuation of state-sponsored legal killing as morally barbarous.

But an awful lot of Californians don't think about the death penalty much, except when asked to vote on one of our occasional ballot measures. None of the statewide measures voted on in recent years have been headline initiatives. Vast crowds of other, better funded, even more controversial, subjects have commanded higher profiles. The unconcerned middle hasn't really been forced to grapple with the issue. The California death penalty has been floating along on inertia and status quo bias for a while now.

Gov. Gavin has simply made the bet that the underlying stasis he's made more certain by the moratorium will not harm him instate -- while greatly enhancing his liberal reputation nationally. I suspect this is a winning bet.
Posted by janinsanfran at 12:23 PM