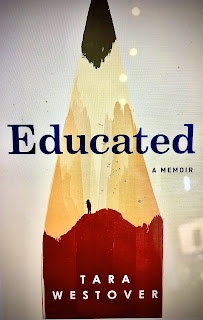 Tara Westover's Educated: A Memoir was a bestseller in 2018, widely assigned in colleges -- probably both because it tells an arresting story and gracefully shares the potential liberating joy of learning.

Westover's father was/is a patriarchal religious cultist, full of 19th century European conspiracy gobbledegook about the Illuminati, grafted onto an unreformed Mormonism. Her mother was/is a gifted midwife and herbalist enthralled to the headship of her pathological husband. Tara was/is the youngest of seven siblings raised on a mountain side in rural Idaho. The patriarch understood that, however remotely they were located, the children would (and should to my way of thinking) have been removed from his abusive household by a functioning social welfare state. So most of the tribe grew up in familial isolation, without birth certificates, or seeing doctors for vaccinations, illness or injury, or experiencing any organized public schooling.

Though the Westovers were dirt poor, this is not a book about rural deprivation. The family worked dangerously and long to scratch out a precarious living. But Westover's upbringing, though shocking in the moments of repeated carnage in a junk yard, is about familial abuse and patriarchal violence, not hunger or want.

Tara Westover somehow figured out she desired a college education. She'd had next to no formal schooling but had learned to read carefully and deeply by studying the Bible and the Book of Mormon. And she shared the family belief that if you wanted and needed to learn something, you could. She acquired test practice books and taught herself some algebra from high school texts -- and somehow aced the ACT (American College Test) winning entrance to Brigham Young University. And there, and subsequently on a fellowship to Cambridge in England, her intellectual and moral universe was blown apart, re-ordered by dint of her own diligence and luck in finding intellectual mentors. The consequence was alienation from most of her family back on the mountain, other than some more distant relatives and two siblings who ended up living away and acquiring PhD degrees themselves.

In this awful coronavirus moment when parents and teachers and all of us are trying to figure out what can be done for a generation of children for whom organized public schooling is inaccessible, the book's lesson that learning can be acquired without the conventional formal process seems important. Tara Westover wanted to learn; she found books; she filled the enormous gaps her life had left; and the process led her out of an intellectual and moral cul-de-sac. She is living proof that, if young people feel motivated to learn something, and enjoy half a chance, and don't have the impulse bored out of them by regimented schooling, some will thrive.

I'm extremely sympathetic to this insight, because I share much of Westover's view that children (and all of us) will learn when we want to. Located very differently, I solved the deadening effect of schooling by excelling at it -- impressing the teachers and getting good grades were the price of a stultifying world allowing me to follow my intellectual curiosities. If I succeeded on their terms, they'd let me alone to explore and think. And then I did just that and have continued to do it all my life.

But how widely can free-form education serve members of a big, complex, modern, technological society? It works for some. But how many? And what happens to young people whose curiosity is less acute or just different? Are the schools' group socialization to communal life and activity worth the cost in individual development and experimentation? These have, I think, always been the questions of idealistic education reformers, as long as there has been widespread formal education to reform.
...
I first encountered Tara Westover and her education story in a charming interview with her Cambridge University mentor, the political theorist David Runciman. Highly recommended.
...
It would be easy to dismiss Westover's Idaho family as simply exotic white rural bumpkins. It would be easy to assume their violent dysfunction came from being Mormons. I'm very grateful to have learned enough over the years to recognize that the human disaster which was her family is largely a consequence of particular male entitlement, ignorance, and mental illness, not location or religion. If the conventions of straight white American society work for you, and you fall into bad luck or poverty, probably the best place to be located in the country is the rural Mormon West. These communities take care -- on their own terms. Being different is something else again. I've known refugees from Mormon communities who could not fit in -- especially violators of gender norms -- who were driven as destructively crazy as Westover's father. For them, the only hope was to get out. It is big world.
Posted by janinsanfran at 8:17 AM