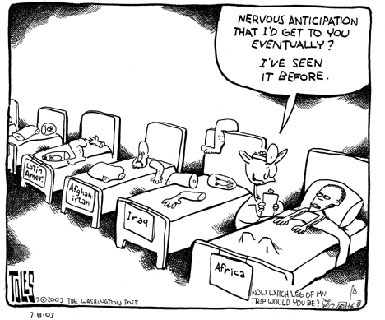 Bumping around the blogosphere the other day, I found myself at a place called Democracy Arsenal reading a post called 10 Foreign Policy Questions Progressives Ought to Be Thinking About How to Answer. The author is Suzanne Nossel, the blog founder, whose biography seems to be that of a credible Democratic policy intellectual. Sadly, I was reminded why, if we ever get rid of the current Neolithic regime, we'll then have to struggle with the Neanderthals who will populate the halls of power under a run of the mill Democrat.

Here are Nossel's "foreign policy" questions (in boldface type) with my comments:

1. Should the US Military Be Enlarged? What kind of mind puts that question first among "foreign policy questions"? There's a bad case of cart before horse here. It would seem a far more plausible first question would be "what do we need a U.S. military for?" Having answered that, (and I am not saying we don't need one) we could sensibly discuss Nossel's question.

2. Is the Fight Against Terror the #1 priority or simply a top priority? Again Nossel avoids the real question: just what is this necessary effort 9/11 has forced on us? We don't want our country and the world paralyzed by terrorism. The current regime has misnamed this effort "a war." Terrorism will continue to be the weapon of the weak. Preventing it is a law enforcement problem. Raising it to the status of a "war," amounts to letting terrorists define how our society lives. That's surrender, not a solution.

3. What is our position on free trade? What is this "free trade"? From what we have seen via NAFTA and the WTO, it amounts to untrammeled freedom for those who have to exploit those who have not. The world doesn't need any more "free trade." Technological progress has connected us all; now let's figure out how to use our new connections to increase the quality of lives all over the world. Now there's a project.

4. What are the primary lessons of Iraq for American foreign policy? Don't invade countries that present no threat? Pre-emptive wars may bite your butt, unexpectedly? Elect a president who values human lives other than his own? Words fail me.

6. What will we do to revive global nuclear non-proliferation? We could start by abiding by the terms of the non-proliferation treaty we signed and work to reduce our own nuclear arsenal. As long as we are scofflaws, we can't very well expect others to take the treaty seriously. And if we go in for pre-emptive wars, no wonder nations that feel threatened want nukes.

8. What are our big new ideas? We didn't have any memorable ones in 2004 and cannot afford a similar void again. I don't know -- if people with the outlook of Ms. Nossel are developing big ideas, I suspect we are better off without any. Though I can easily come up with a suggestion that doesn't seem to be on Nossel's radar: use the riches of this country to help the nations of the world substitute sustainable economies for a system of greedy, cancerous growth.

9. What More Needs to Be Done to Straighten Out the Gathering and Use of Intelligence? This one brings to mind Gandhi on what he thought of western civilization: he suggested "it would be a good idea." Intelligence would be a good idea, and obviously I don't exactly mean the products of our spooks. A government functioning to promote the general welfare and ensure tranquility (that's from the Constitution in case it seems familiar) needs to know what threats face it and what is going on. And it will find ways to know, with the enthusiastic cooperation of most of its citizens. Our problems with "intelligence" arise from the unrealism of our government.

10. What needs to be done to shore up American superpowerdom? Get over it. U.S. superpower was the product of a series of historical, geographical, and economic accidents, combined with momentary good management (mostly under FDR.) We live in a different, differently threatening, world. THE policy question of the 21st century is how to create a more stable, multi-polar world that offers substantial equity to all without rendering the planet uninhabitable. When security wonks start working on that one, they'll earn their keep. Until then, they are just jerking off.
Posted by janinsanfran at 6:10 PM

"Superpowerdom?" You didn't just make up this Ms. Nossel and her Top Ten List, did you, because it's almost too noxious to be true. In fact, even thinking about this list will bring out all my crudest prejudices so I won't give it another moment's thought, other than to say: Anathema, and Begone!