Kingdom of Jordan under pressure 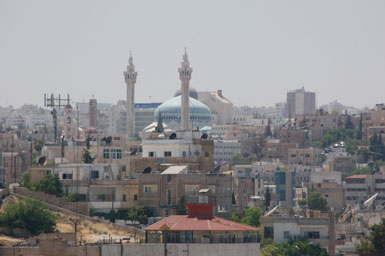 The King Abdullah Mosque is a prominent feature of Amman's skyline.

Juan Cole pointed to a story today from the Jordan Times that underlines one of the chief insights we brought back on our recent trip to the area: the notion that Jordan is a peaceful, enduring island of stability in the area could easily prove to be a delusion if the pressures on it from wars in Israel and Iraq worsen.

Today's particular news story was about growing dissent by Islamists who are pushing the Jordanian government to be more supportive of Palestinians while Gazans are under attack -- and who have also sought to memorialize the Jordanian guerilla leader Abu Mussab Zarqawi who was recently killed by U.S. forces in occupied Iraq. Jordanian Islamists are only one part of a larger picture of growing stress in this small, resource poor country.

A few facts about Jordan, the country sometimes referred to as "between Iraq and a hard place." The present state came into being in the 1920s. The colonial power, Great Britain, created a kingdom out of a slice of Palestine west of the Jordan River as a sop to Arabs after promising the rest of the territory to the Zionists. Like the rest of the Arab world, Jordan was at war with the state of Israel from its founding in 1948. In the 1967 war with Israel, Jordan lost Jerusalem and the territory now referred to as the occupied West Bank. Under great pressure and with the promise of significant material support from the U.S., though against the wishes of most of its people, Jordan signed a peace treaty with Israel in 1994.

The 1948 and 1967 wars pushed a flood of Palestinian refugees into Jordan. It is estimated that today some 65 percent of the population of some 5.7 million is of Palestinian origin. Palestinians can take Jordanian citizenship, although many remain in refugee status as designated by the United Nations in order to press their claims to property in territory now held by Israel.

The country is a constitutional monarchy, though the monarchy part of the equation is much stronger than any constitutional limits. What King Abdullah II says goes -- political expression is quite tightly controlled. Everywhere one looks portraits of the king emphasize his dominant role in the system. Jordan is a police state, though a relatively benign one for residents who eschew politics.

Meanwhile, to Jordan's east, the U.S. invasion of Iraq and the failed occupation are stirring the pot. Already overrun once in many citizens' lifetimes by Palestinians, Jordanians worry that an influx of Iraqi refugees will again engulf them. That influx is well underway. Beginning in 2003, Iraqis who could afford to leave settled in Amman, driving up rents and property values by as much as 20 percent in a few months. Ordinary Jordanians resent this economic squeeze, but they really fear a flood of poor Iraqis fleeing the carnage next door. Already, almost all the ordinary working people we saw on a walk around downtown streets in Amman in the evening were Iraqis. Refugees are doing much of the low paying labor in the country.

No one we talked to in Jordan was sure of the numbers involved. Some say Iraqi refugees number a quarter of a million; taxi drivers, not always the most reliable informants, are sure the true number is more like a million and are vocal in complaining that the refugees are undercutting their ability to make a living.

Meanwhile refugee Iraqis point out that Jordan will not give them visas for periods longer than 3 months. They are forced to risk periodically returning to Iraq to renew their papers. They also report that Jordanians extort and bully them whenever possible.

The U.S. war on Iraq has not only torn that unhappy country apart -- it has also created strong destablizing pressures within the countries of the region. A major increase in instability in Iraq could also undo the delicate balance that is the kingdom of Jordan. Jordan was the West's "success story." This is what U.S. Neocons's grand dream of remaking the Middle East has wrought.
Posted by janinsanfran at 4:39 PM

Yes, I seem to recall the war enthusiasts were fond of the idea of extending the Hashemite monarchy's reach...

Of course, with Jordan having an actual, functioning air force and armored divsions, and Iraq not for a long while to come, that might still be an option deep in Dick Cheney's stack of special plans.

Then again, it could turn out like the dog's recent visit to your cat's domain. {grin} Best to R.