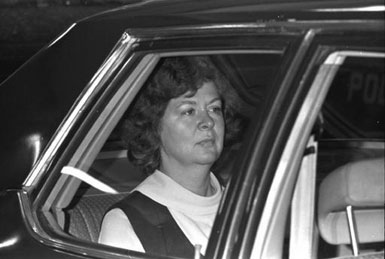 Sara Jane Moore (I've been unable to source this photo, but it looks like my memory of Moore.)

The death of President Gerald Ford has stirred memories of the two assassination attempts he survived in Northern California in 1975 -- and triggered these pissy comments in the Los Angeles Times.

Although the two would-be killers' roots are different, their plots were both symptoms of the 1970s, the "goofiest decade of the century for California … in terms of its sheer ominous weirdness," said Kevin Starr, USC history professor and state librarian emeritus.

The assassination attempts ... also contributed to "an atmosphere of lawlessness" in Northern California, Starr said. ...

"A lot of people were rolling around unmoored, finding a reason to believe there was a political or conspiratorial explanation for their inner upheaval and concluding if they could only act on their impulse, they could save the world," said Todd Gitlin, professor of journalism and sociology at Columbia University and a former leader of the Students for a Democratic Society. ...

Come on guys, get over yourselves. Yes, it was a wacky time, but admit you really hated the decade and its excesses because they signaled the end of an oppressively white, male, straight, gray-flannel-corporate United States. We're still fighting over what alternative national myth will describe this diverse country, but the majority who never fit the old picture aren't ever going allow re-imposition of the old ways. And wacky Northern California in the 1970s led the way into our problematic present.

As a 20-something San Franciscan, I had less than six degrees of separation from both women who tried to kill Ford. Squeaky Fromme, who pointed a gun at the president in Sacramento, was a member of the Charles Manson cult whose members carved up actress Sharon Tate. After Manson was jailed, some of them adopted a warped "environmentalism" that prefigured the obsessions of the Unibomber. The father of my partner at that time was a high level state bureaucrat in the Department of Fish and Game; he received bizarre threats from Manson followers who objected to hunting.

That was, happily, a pretty remote connection. But Sara Jane Moore who took a potshot at Ford on Sept. 22, 1975 was actually an acquaintance. She joined a walk from San Francisco to Modesto led by the United Farm Workers Union to denounce anti-union vintner E&J Gallo. I had the privilege of doing the whole week-long trek. The march brought together folks who worked in the wine grape fields with some of their more agile urban allies -- and the usual collection of head cases of the sort that progressive causes attract because we don't exclude them unless they act out spectacularly. One of the head cases was a homeless, brain-injured Vietnam vet who kept threatening to kill Moore because he claimed she was an FBI spy. Moore seemed mildly disturbed, but still a marginally normal, middle-class union supporter. Several of us put a good deal of energy into preventing mayhem. How were we to know that it would come out after Moore shot at Ford that she really had "informed" on radicals for the FBI?

Someone else I know from that time has posted some purported quotations from Moore whose provenance I have no reason to doubt. Moore comes across as paranoid -- and as holding beliefs about government activities that were neither uncommon nor entirely false.

Both Fromme and Moore are still serving life sentences in federal prisons.

Yes, it was a wacky time. But it is far too simple to trash the time's excesses. For good and ill, the foundations of much we live with now took shape then: the Dick (Cheney) and Don (Rumsfeld) show on the one hand, but also women's and gay equality in society and our groping progress toward a society in which no racial group either constitutes a majority or sets the cultural norm.
Posted by janinsanfran at 5:45 PM

Almost one year to the day since the passing of Former United States President Gerald Ford, the liberal activist who tried to kill him walks free.

Most people believe that attempting to assassinate a US President should and normally does result in a life in prison for the would - be assassin. Sara Jane Moore is proof that they are wrong. What’s more, her prison record is dotted with conduct violations and an attempted escape in 1978.

Another interesting detail of this case is that Sara Jane Moore was successful at convincing a federal judge to block a prison warden from taking away an inmate’s cell keys back in the summer of 2000.

So why would would a federal prison’s parole board free Sara Jane Moore?

Inmates with life sentences can petition for parole after a staggeringly brief 10 years. This makes it possible to receive a life sentence and be walking the street again in little more than a two-term Presidency.

Presidential assassins can take shots at elected officials, skip two elections and be back in business for more political activism just in time to pop a new President if a parole board so desires.

Moore was released under a federal law that makes parole mandatory for inmates who have served at least 30 years of a life sentence without getting into trouble, according to Thomas Hutchison, chief of staff of the U.S. Parole Commission.

Never-minding the fact that Moore’s conduct was not without incidence during her incarceration, the real outrage is that our own laws mandate the release of such prisoners in just three decades. This is good news for the John Hinckley Jr’s in our prison system, and the future activists who feel like changing the course of history.

Now Listen To This….

Michigan’s second-highest court says that anyone involved in an extramarital fling can be prosecuted for first-degree criminal sexual conduct, a felony offense where Life in prison is within the mandatory sentencing guidelines for that state.

That’s right folks, our laws have become so politically and legally skewed that attempting to blow away a US President is nearly on par in the eyes of the law as an ordinary drunken fling. It’s quite an outlandish thought considering many of our own Presidents have been caught up in extramarital affairs.