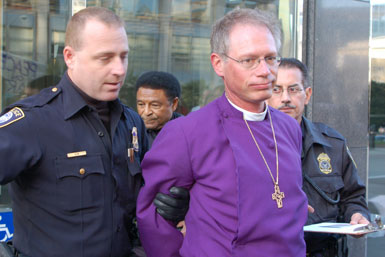 The Rt. Rev. Marc H. Andrus, newly installed Episcopal Bishop of the Diocese of California, was arrested today outside the San Francisco Federal Building in a "die-in" protesting the U.S. war on Iraq. Prior to joining in blocking doors, Bishop Marc celebrated the Eucharist in the plaza in remembrance of all the dead in Iraq. 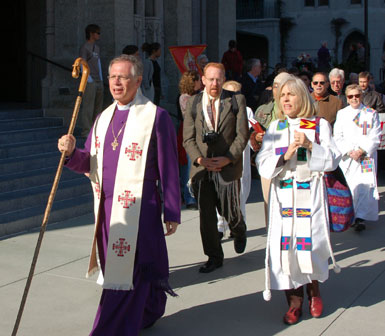 About 200 Episcopalians followed the Bishop in procession from Grace Cathedral on Nob Hill down through the Tenderloin to the Federal Building. 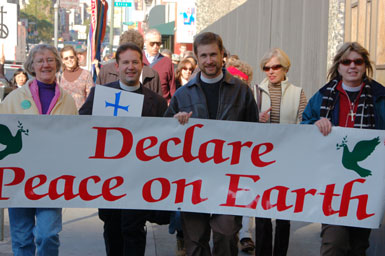 The crowd was heavy on Diocesan staff and clergy, as well as members of the Episcopal Peace Fellowship. 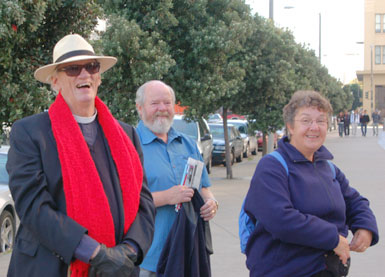 Longstanding regulars of the weekly Thursday vigil against the so-called "war on terror" welcomed the reinforcements. 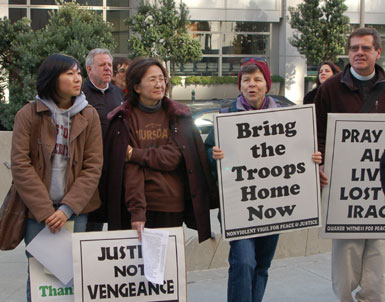 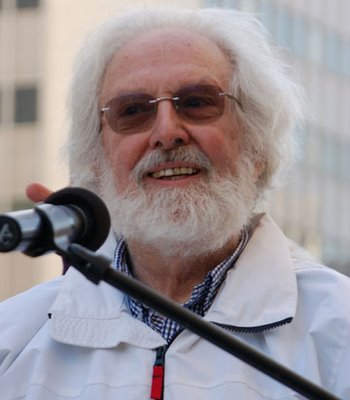 Markley Morris, the tireless organizer of the peace protest, greeted the procession. 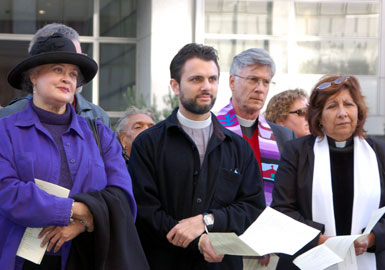 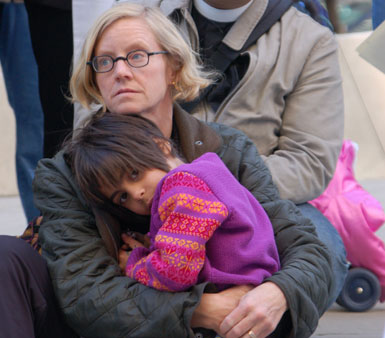 although not perhaps all in quite the same way. 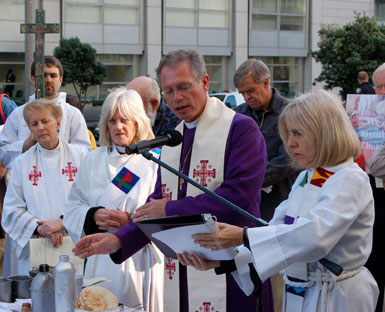 The elements of the mass, the bread and wine, consisted of pita bread on a tin plate and wine offered from metal canteens. 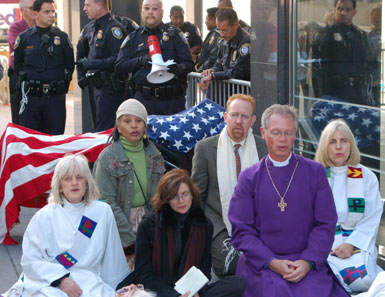 At the conclusion of the mass, those willing to risk arrest took places in front of building doors, singing softly. Federal police declared them an "unlawful assembly" over a bullhorn. 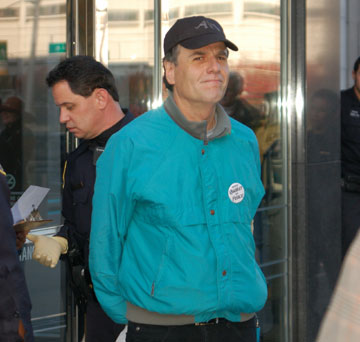 Arrests were slow and gentle. Here the cops take a Quakers participant in the vigil. 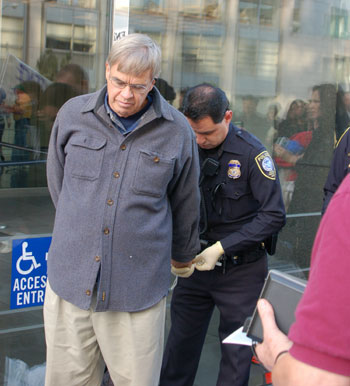 Police removed David Hartsough who works on the Declaration of Peace campaign. 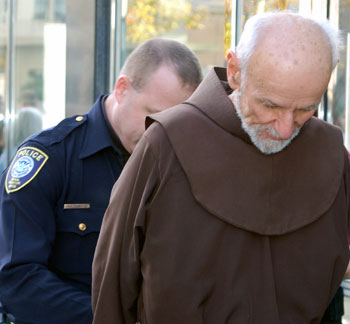 Fr. Louie Vitale, O.F.M., was among those taken away. 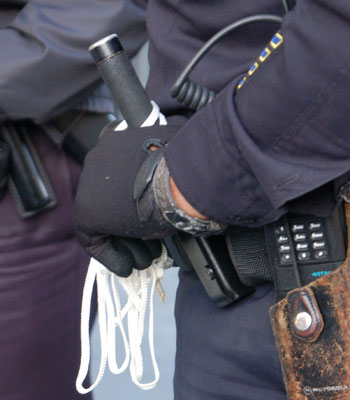 Police used "handcuffs" that looked almost as if they were made of heavy shoelaces rather than the usual plastic bands. 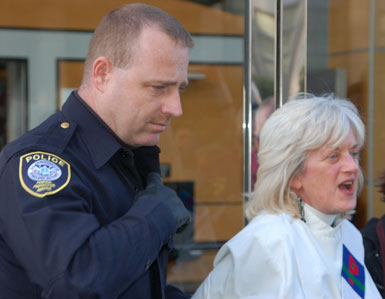 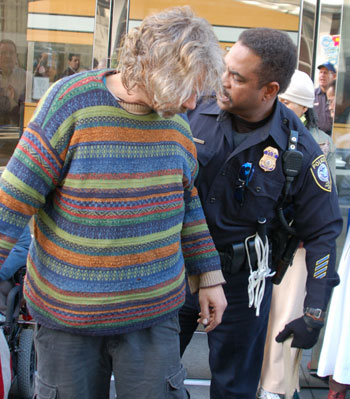 Not all the protesters appeared to enjoy the class and clerical privilege that characterized most of those arrested. 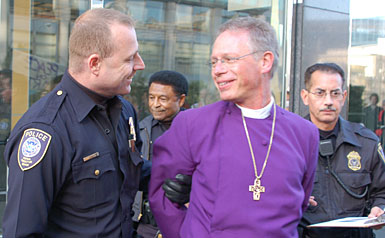 When the Bishop's turn came, he seemed almost in his element. More than one member of the Episcopal clergy remarked to me: "we're seeing a new day."

The event was surprisingly moving even to this hard-bitten old political cynic. I've been known to be critical of these carefully choreographed "non-violent" protests, even though I've done my share of them. When we the comfortable get ourselves arrested, we don't risk much; the power of nonviolent action is only really revealed when people who have little or nothing choose to demand, through peaceful demonstrative self-assertion, that they have a right to full humanity.

Seeing Bishop Marc get himself arrested wasn't about that; it couldn't be. But it was about seeing him exemplify through action what he thinks the people and clergy of his diocese ought to be about -- and that is quite a call, even here in Left Coast City.
Posted by janinsanfran at 9:18 PM

Great write up, very inspirational too, thanks for letting me (live inside the beltway) know what's happening around the country to end the occupation.

It was a deeply moving event, which was the last thing I was expecting. Your photos are exquisite, better than the ones over at the "Chronicle" and the ones I'm about to put up on "Civic Center." So I'll just put more of them up as compensation.

Lovely to meet you in the flesh finally.

Radical Sectarian Episcopalians? We need a reminder peace is a universal value.

Wonderful pictures Jan. +Marc's sermon was eloquent, I thought. I, too, wonder about the efficacy of such events, but they really are not so much about success as they are about faithfulness,integrity, and witness. I was glad for my eight-year old son see the work of a bishop and of the church through the lense of this event.

The only risk involved for the Church is that a few Republican donors to Grace Cathedral will withhold gifts. Thank God we are no longer being held hostage by such fears.

I'm not sure what you mean by Radical Sectarian Episcopalians? Could you elaborate?

Episcopalians are one strand of a catholic (universal) church that spans 2,000 years and the globe, and for whom Christ is a living, cosmic reality - a universal spiritual reality, if you will. While the church expresses some values that are, I hope, universal, its adherents, like all human beings, are formed by particular histories, traditions, and contexts.

We all come at the universal in a particular way. The path to the universal is through the particular; this is part of what makes humanity so richly diverse in its cultures. Thus, the Episcopal bishop celebrated with a rabbi, an Islamic leader, Quakers, Roman Catholics, humanisits and others.

SFMike has also blogged this moving event. I really love it that you caught my rector's family. :-)

The vessels for the Eucharist were actual World War II soldiers' gear.

It was good to be there. And good to have a bishop willing to offer himself bodily for peace. That seems to me an example of true witness. We are blessed to have him.

Good pics Jan. May I use one at Jake's place if I include a link?

Thanks for the wonderful report and the great pix, Jan. I saw you with your camera, yesterday, croched down to get just the right angle and it's good to see the pix.

Also good to know that it's you who vigiled with my sister at Gay Head on Hiroshima Day.

Amazing photos. I hope something similar is organized soon here in Chicago!

I gotta get ready to worship.

Hey - Jan - Great photos and story. It was wonderful to see there.

Dear Jan,
Thanks SO MUCH for capuring the spirit of the day.
And I am glad someone remarked on the use of the army surplus chalices and pattens. This brilliant idea was care of the Rev. Donald Schell of St. Gregory of Nyssa, SF.

Also it was interesting that twelve got arrested and about 6 of us were passed over for arrest. Probably because of the flag-draped hancicapped person- they did not want to deal with arrested him!
Thanks again.
The Rev. Este Gardner Cantor