You never know quite what you'll run across in downtown San Francisco. 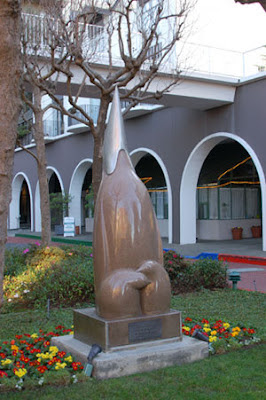 This penguin family is at least of recognizable ancestry; it's an unmistakable Benny Bufano. Writing for the California Parks Department, which has ended up with lots of Bufano sculptures, E. Breck Parkman caustically describes the artist's ambitions:

From an early age, Benny Bufano believed in peace, but he was not the typical peacenik. Benny was eclectic, suspicious, egotistical, perhaps mildly suicidal, occasionally hostile, and often given to exaggeration if not outright lies. People either loved him or they hated him. San Francisco’s beloved newspaper columnist, the late Herb Caen, was quite fond of Benny, and regularly featured him in his daily columns. The exposure helped elevate Bufano to celebrity status.

While it is no secret that Bufano was seriously flawed as a family man, his celebrity assured him an almost saintly position as a revered member of the family of man. Benny’s friend, Henry Miller, once said of him, ”He will outlive our civilization and probably be better known, better understood, both as a man and artist, five thousand years hence.”

Bufano wanted his creations to survive forever, and it is quite possible that some of his monumental sculptures will outlive our civilization. Benny’s stainless steel, concrete, and granite constructions will slowly deteriorate over time, but unless they are intentionally removed or destroyed, remnants of them will likely survive the millennia, just as ancient monuments remain today in places like Athens, Rome, and Mexico City.

Bufano was a fine specimen of a San Franciscan.

Leaving the Bufano, I wandered into a little park in the shadow of Rockefeller Center West (Embarcadero Towers), and saw this: 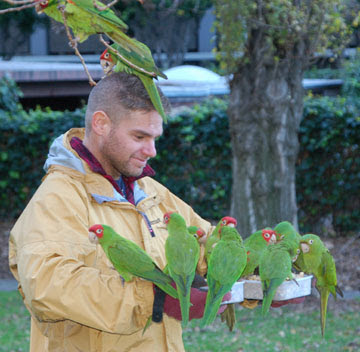 I'd never before seen the famous Wild Parrots of Telegraph Hill. They really do exist, for all to see, not far from the foot of Market St. 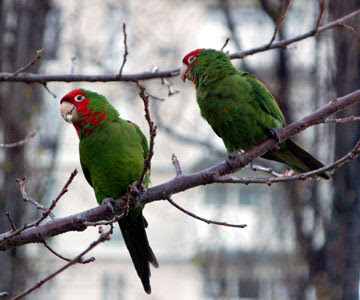 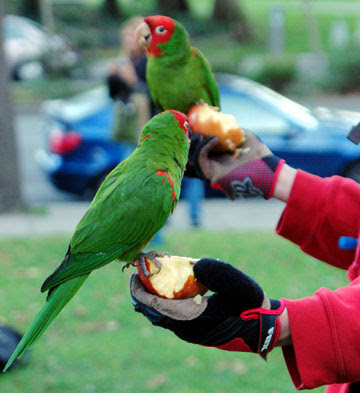 They apparently are fond of apples. 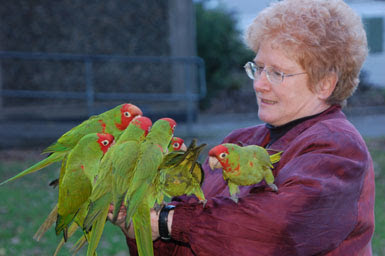 And also seem fond of people who feed them. I am pleased to report that a parrot landed on my head while I was getting these pictures.

If you have a spare afternoon in San Francisco, you might look in on them off Drumm between Sacramento and California Streets.
Posted by janinsanfran at 9:43 AM

Very cool parrot photos. And the Bufanos that used to be in the Valencia Gardens projects which were transferred to the Randall Museum have gone back to the rebuilt, gentrified Valencia Gardens, or whatever they are calling the new projects. Check them out.