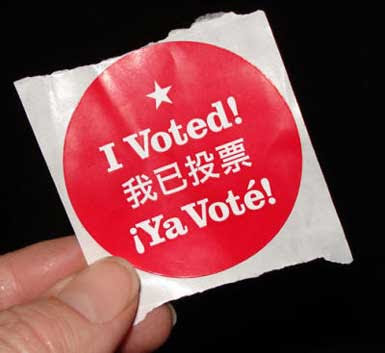 Folks interested in the mechanics of campaigns need to think about these findings through a reality filter -- maximizing turnout is seldom a campaign goal. Campaigns are about maximizing the right turnout, the turnout of voters on our side. (Remember what Karl Rove thought U.S. Attorneys ought to be doing.) Nonetheless, these social science observations can help us think about what we do.

The academics assured the audience that they had not found anything startlingly different from the findings in a previous book by Green and Alan Gerber which I have discussed here. But they brought some nuances and additional certainty about previous findings.

What doesn't work
Since resources are always scarce, this can be the most valuable insight. This project reinforced previous research that direct mail has almost no discernable positive effect on turnout. Considering the amount of money that campaigns spend on it, that's important. Mail may persuade a likely voter to choose your candidate as opposed to someone else, but it won't engage unlikely voters. If winning requires engaging those voters, you'll have to use other forms of contact.

Two other contact methods that do not create measurable turnout bumps are robocalls (even by trusted local spokespeople like pastors) and mass emails. Campaigns might believe these are worthwhile to reinforce existing support, but they aren't going raise vote tallies.

What does work
The gold standard remains the "at the door" personal canvass. Researchers provided a lot of useful information about how to raise the quality of these contacts. My takeaway from their findings follows (the academics are not responsible for every nuance I'm giving this.) Phonebanks also worked -- again, if the caller could carry on an "engaging conversation" with the target voter. Stilted, scripted contacts didn't work. Volunteers are more able to carry on those quality conversations than most paid phonebanks. In general, the positive turnout effect of phone calls was strongest among young voters and among much older voters reached in their "home," non-English, language. Researchers also found that a second reminder to potential voters found by the phonebanks increased turnout. On that point, all I can say is: "I sure hope so!" Any campaign that goes to the expense and trouble of identifying its positive voters reminds/encourages them until they have voted. Doing that encouragement is the purpose of having a field campaign.

Other observations
This one is sad news for campaigns: unlikely voters are more likely to be engaged by contacts in the last two weeks before election day than they are by earlier contacts. Again, we've always known that intuitively, but we're getting the research to prove it. This argues for firming up your base (and attracting and training your volunteers) in the period two months until two weeks out, then intensively canvassing the unlikely voters.

This also makes the issues raised by vote by mail and absentee campaigns more complex. Donald Green specifically reported that his research says that absentee voting merely moves likely voters from the election day category to the absentee category. It does not seem to attract new voters. Voting by mail does however lengthen that short two week window when contacts are most effective.

I've long argued that pushing absentee voting is the wrong way to go for low budget campaigns in low income, low propensity voter communities. Absentee voting is bureaucratic and expensive to track -- not what community campaigns do best. To draw people into the voting universe, the process should reinforce a sense of community: going to a community polling place on a particular day is more a collective activity than dropping an envelope in a mailbox individually when you get around to it.

All the research reported by these folks supports the premise that voting increases with the strength of social capital; that civic participation expresses and reinforces social cohesion. When we think of ourselves as isolated families and individuals, alone, protecting ourselves in a cruel world, there is little motivation for voting. Why bother? When we experience ourselves as members of a lively community that collectively is creating its own future, we vote and we get together in organizations small and large to influence our quality of life. Campaigns need to live inside of and enlarge the flow of ongoing community life. When they do, they win.

For many, many interesting reports of election research, take a look at GOTV.
Posted by janinsanfran at 5:14 PM

I have always voted. From the time my kids were born until they were in high school, I took them with me to vote — into the booth. Voting gives me this absolutely WONDERFUL feeling. I wear my sticker proudly all day. I love voting.

So when my precinct was segregated by our RoV after the 2001 redistricting (it's complicated, but we are a small precinct and have been given a sort of orphan status by redistricting, so it's not cost-effective to staff our precinct), mandatory absentee voting became the rule of the day. I rail and rebel — and dammit, I walk my absentee ballot into the polling place on Election Day — because of feeling all the emotions that you so wonderfully summed up.

So whenever I hear the consultant class talk up the miracles of absentee voting, I always wonder a little bit — am I the only one who feels the way I do? Somehow, I don't think so. When I go to turn in my absentee ballot on Election Day, there are always plenty of other people like me standing in line holding their absentee ballots. And when I talk to them, they never say, "Oh, I just procrastinated, so now I have to do this." To a person, they always say, "I wanted to come in person to cast my vote. The other way just doesn't feel right."

So just seeing you put this into print absolutely made my day. And maybe I'm nuts, but you captured my sentiments perfectly.

You are not nuts! There are many, many people who feel just as you do. I live with one. :-)

And among inexperienced voters, I think that magical response to a novel, unique experience is vital to making voting feel significant. All of us are all too experienced with filling out slightly threatening forms -- that's too much of the emotional content of absentee balloting to attract many folks.

Given the costs, I think more and more jurisdictions are going to go to vote-by-mail polling. Or perhaps (if they can work out the security issues which are still VERY great) to online voting. For election authorities, this is a no brainer. Polling places and poll workers are costly, even though they do it on the cheap.

I think it is very important for folks who want to increase participation to figure out other ways of making voting a communal experience -- though it pisses me off that, once again, we are forced to recreate a social function which is being effectively privatized in the name of cutting costs.