The map tells the story... 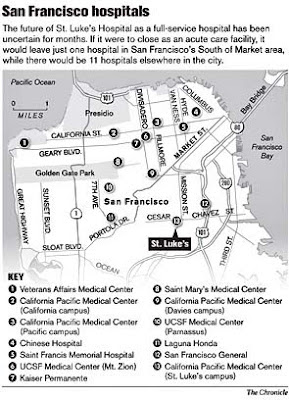 If Sutter Health/California Pacific Medical Center has its way, the southern part of San Francisco will have NO hospital except the overcrowded, underfunded County General. That part of the city is the last area where working families, many African American, Latino and of various Asian ethnicities, hang on in this gentrified, boutique city.

Elizabeth Fernandez tells the human and financial story on the front page of this morning's Chronicle. Some excerpts:

"People will suffer," said the chief of cardiology, Dr. Ed Kersh. "The day after St. Luke's closes, someone having a heart attack south of Market will have no place to go for acute or continuing care - if he or she is lucky enough to survive."

... Sutter Health, which is affiliated with Cal Pacific, invested about $200 million in St. Luke's in recent years, purchasing new equipment and adding cardiovascular and breast health centers. In 2007, Sutter transferred the administration of St. Luke's to Cal Pacific, the city's largest nonprofit hospital.

Both Sutter and Cal Pacific made cost-cutting changes at the historic hospital. The workers' compensation clinic closed, and the outpatient physical therapy program transferred to the Davies campus at Castro and Duboce streets, one of four CPMC campuses in the city. The psychiatric ward and outpatient mental health clinic at St. Luke's closed in 2005. Next month, the neonatal intensive care unit will be downgraded to a special-care nursery.

The 10th floor, primarily a surgical ward with private rooms, has in effect closed, resulting at times in four patients per room on the ninth floor. Nurses say those rooms are so crowded and noisy that at times a patient will become the self-designated "captain" who helps facilitate care for the whole room.

It presents a "nursing challenge that should never occur in a civilized country," said Mary Micalucca, a St. Luke's registered nurse for 33 years. "These patients are often left to their own devices - pulling out IVs and other tubes, creating increased costs and nursing interventions."

... The financial quandary vexing St. Luke's is familiar to municipalities across the country: How do cities and health care corporations balance soaring costs with the medical needs of the poor?

For St. Luke's there's only one answer: Take care of them.

The St. Luke's drama is certainly an argument for a properly funded universal health care system -- but it also reveals that that pseudo-nonprofit corporations are no way to provide people the care that should be a human right. As a Sutter spokesman concedes in this article,

"We looked at what we thought the community needed from a business model."

Not good enough. This rich country's failure to provide health care to all its residents in the interests of protecting the freedom of the comfortable to make a profit (that is what stops us, you know) makes all of us accomplices in crime.

Old timers in San Francisco may be reminded of the long running, deeply community-based struggle to save the International Hotel in Chinatown, a battle whose fierce, joyful twists and turns rocked the city for a decade. Apparently we need to do that again.

Posted by janinsanfran at 9:24 AM

Let's hope the outcome is not as tragic as the International Hotel, though I'm not particularly hopeful.