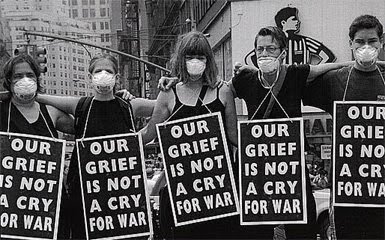 Asked to contribute to a panel on the antiwar movement at the recent Historians Against the War conference, I decided to assemble a chronology to ground my thoughts. In the panel, I presented a condensed version of this post which is Part One of the four part chronology I found myself writing. I'll be posting further chronological reflections over the next few days.

The attacks of 9/11 left the small contingent of progressive individuals and organizations in this country just as horrified and nearly as confused as everyone else. I remember watching the towers fall and thinking "some guys somewhere are seeing their 'made for TV' movie succeed beyond their wildest dreams -- and everything I care about is in deep shit." I imagine most "Historians against the war" felt similarly.

At first, the chief venue in which we tried to comprehend the new terrain and new tasks ahead of us was via a series of emailed "letters" that buzzed around the internet. Revenge was the order of the day in the public at large; anything but the most bellicose posture made the speaker suspect. These internet communications have mostly disappeared into the ether. I want to make sure that we capture some of the expressions from those times here.

Bill Quigley of Loyola Law School sent around "Ten Principles for Social Justice Organizing in A Time of Crisis." These were good tips -- I think they are still sound and worth reading. He concluded:

"If our only response to the events of September 11 is to do what we did before that, but only harder, I think we will waste a lot of energy. We have to thoughtfully and humbly reconsider our strategies and develop some new ones. Otherwise we will just remain stuck."

This seems to me prescient.

Bob Wing, then editor of Colorlines Magazine, tried to explain to the left what had changed:

"I believe the Sept. 11 attacks are ushering in a major rightwing offensive, both global and national. It is likely to be sustained for some time and become a historical watershed. The rightwing of the ruling class and its ultra-right allies could not have asked for a better opportunity to aggressively move to reshape the world in their image. In the absence of a major countervailing force, they have serious grounds to feel that they will be successful.

Appealing to the American psyche, which sees its relatively peaceful surroundings as a birthright (when it is really a national privilege), the rightwing seeks to capture the moral high ground, whipping up patriotism and "anti-terrorist" fervor. Wielding its superior military and financial strength, Washington will seek to rally its First World allies into a world "anti-terrorism campaign," bring its erstwhile and vacillating allies into line, and destroy or mortally cripple its enemies, especially in the Middle East and South Asia."

How right he was.

Wing went on to urge that progressives recognize a new challenge and opportunity:

"By far the most important is ... addressing the issue of why this attack happened and how to respond. ... I believe our main message should be that U.S. life will become increasingly insecure and dangerous unless this country improves its international behavior. In the era of globalization, peace at home is linked to peace abroad. And increased insecurity would likely result in lost civil liberties. ... What we are talking about is a new kind of peace movement."

That is, 9/11 meant we had to conceptualize what a peace movement would mean in a nation that had lost its certainty of invulnerability while still grotesquely able to inflict damage on the world. The attacks revealed that we are dependent for our security on "playing well with others." But could we learn this?

I don't think we've built that kind of "new kind of peace movement." Instead of trying to move the U.S. into a post-imperial posture, we've predominantly relied on the inertia of an historic American isolationism to drag the U.S. away from its wars. We've got a strong force at our backs when we rely on U.S. ignorance of and indifference to foreign realities, but this is not necessarily the force that can carry us forward.

The peace movement has notably failed to organize by attraction. We have not imagined or presented an animating vision that draws ever wider circles of people into the fold with us. In part this is because post-2001 U.S. military adventures have been undertaken against states and individuals who do not look attractive to us, except perhaps as stubborn people who display admirable tenacity in resisting foreign occupation. But there is nothing much to inspire most of us in the communal and religious loyalties that seem to underlie most of the opposition to the U.S. in Iraq.

People who came into the movement from the experience of supporting Vietnamese communist nationalism, or the popular forces in Central American in the 1980s, or the anti-apartheid struggle, found no parallel in this peace movement because there were no indigenous allies in Afghanistan and Iraq who we would want to campaign in favor of. Iraqis can be sympathetic victims (and many are) but we have not come to know them as sympathetic allies, a far more inspiring posture. And we have failed to project a convincing picture of non-militaristic, peaceful United States, as an alternative to the paranoid authoritarian direction provided by our rulers. Apparently the conditions don't currently exist for elaborating such a vision.

Yet with all these obstacles, we have created something of an antiwar movement.

Posted by janinsanfran at 2:24 PM