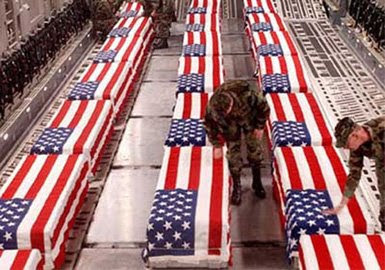 Asked to contribute to a panel on the antiwar movement at the recent Historians Against the War conference, I decided to assemble a chronology to ground my thoughts. Part One is here.

Part Two: Afghanistan and the Iraq invasion;
the antiwar movement builds some infrastructure
and tries some initiatives:
2002-2003
In October 2001, peace movement forces were run over by the U.S. rush to overthrow the Taliban and take revenge on Al Qaida, mostly in the person of miscellaneous Afghans. We also most emphatically did not have the US people on our side. Close to 90 percent of the U.S. population supported the U.S. war in Afghanistan in late 2001.

For many months, though we now know there was never any doubt that U.S. rulers were bent on invading Iraq, folks in the peace movement wondered whether an Iraq war would happen -- and often asserted that our rulers couldn't be foolish enough to do anything so obviously stupid.

Very gradually we built some weak, but increasingly real structures of resistance. The outfit I'm associated with, WarTimes/Tiempo de Guerras, published its first issue of the free newsprint tabloid in February 2002 and promptly had to reprint to meet demand. The WarTimes steering committee thought of ourselves as providing infrastructure for a peace movement not yet in being. The broad coalition of U.S. peace groups that would become United for Peace and Justice was also beginning to talk with each other at this time.

By February 2003, there was a visible U.S. peace movement and a vigorous world peace movement. Across the entire world, millions rallied against the looming invasion of Iraq; the New York Times famously described this international outpouring:

"...the huge anti-war demonstrations around the world this weekend are reminders that there may still be two superpowers on the planet: the United States and world public opinion."

The enormous scale of this public manifestation gave peace forces a benchmark we've never come close to repeating. Many participants from that day apparently concluded: if they aren't going to listen to us, why bother to assemble? The movement's underlying lack of deep ongoing organization made it easy for war opponents to retreat into the woodwork. And since what they had done didn't work, why shouldn't they turn to other concerns.

When President Bush pulled the trigger on Iraq in March, 2003, 75 percent of the U.S. population believed the war as necessary and justified -- not as nearly unanimous approval as greeted the attack on Afghanistan, but nothing for the peace movement to cheer about. As the invasion quickly became a violent, contested occupation and no WMD turned up, support for the war began to erode as early as the summer of 2003.

In June of 2003, United for Peace and Justice formalized its existence as a representative coalition of hundreds of peace groups with an elected board from member organizations led by a full time staff in New York. Traditional peace organizations joined with more recent and often more local efforts to try to rein in the Iraq occupation. Code Pink, the feisty "women-initiated grassroots peace and social justice movement working to end the war in Iraq, stop new wars, and redirect our resources into healthcare, education and other life-affirming activities," began to demonstrate imaginatively wherever politicians supported the war. Local vigils proliferated. International human rights organizations raised an outcry against the U.S. gulag at Guantanamo.

From early on, Military Families Speak Out was able to break through the silence imposed by anguish after 9/11. They worked to publicize the devastating effect extended tours of duty and call ups from the reserves were having on U.S. soldiers. Donald Rumsfeld at the Defense (War) Department, had calculated that the U.S. could fight two concurrent campaigns with very few soldiers on the ground. When this failed, military necessity quickly stretched the human beings who had to fight to the breaking point.

In the year after the Iraq invasion, the peace movement put down some roots and worked at educating the rest of the United States about the realities of war that the administration conspired to hide from us. In that time period, a clandestinely captured photo showing the flag-draped coffins of dead U.S. soldiers became an act of resistance. And we kept on keeping on.

Posted by janinsanfran at 9:49 AM

This is indeed compressed, given how much took place between Feb 2002 and 2003.

Have your run across any sources, online or off, that offer anything like a timeline of major antiwar points of activity/organization?

I have not found a good timeline anywhere -- that's what got me going on this.

Agree this is compressed. The next couple of sections are even more so. But it is a first draft of a start.

I'll try to put down the events and markers I can remember during 2002 sometime next month, and email it to you.