One year ago last weekend I was in Reno walking precincts for Barack Obama. We watched the debate with John McCain at our casino hotel room. After that weekend I was never concerned that Obama would win -- McCain had "temporarily suspended" his campaign in response to the economic crisis and looked like a panicky fool. People simply were not going to elect such a pathetic creature at a moment when they were seeking leadership.

Wall Street and financial journalists tend to mark the acute phase of the financial collapse as beginning on September 14, 2008, when the powers-that-be let the investment firm Lehman Brothers go bankrupt. But I think most of the rest of us didn't begin to realize that something huge was going on until about a week later. Henry Paulson, George W. Bush's Secretary of the Treasury, got our attention when he asked for $700 billion dollars from Congress to save the system at the end of that week. And then the Presidential candidates reacted, sensibly and stupidly.

Since then we've seen the real economy in which people work at jobs and pay bills also tank, following the lead of the investment/casino financial sector. And when we are not just so pissed off we can't think straight, we're trying to figure out what kind of a financial system could have made this mess that put the taxpayers on the hook to bailout a bunch of cowboy gamblers and left us with more than 10 percent unemployment.

In search of more understanding, I'm turning to books far more than to newspapers, magazines or blogs, though there is lots of information and cogitation in such sources. But, like many otherwise informed people, I need deeper context to make much sense of what had been going on in financial institutions. 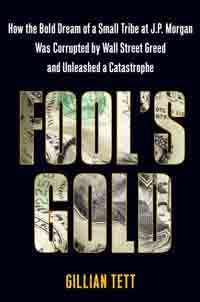 Far and away the most valuable volume I've read yet has been Gillian Tett's Fool's Gold: How the Bold Dream of a Small Tribe at J.P. Morgan Was Corrupted by Wall Street Greed and Unleashed a Catastrophe.

It's a commonplace in journalism discussing the financial collapse for writers to say something like "these bankers were buying and selling such innovative, complex new financial instruments that they didn't understand them themselves." If you read Gillian Tett, you'll come away with a working understanding of such arcane matters as "collateralized debt obligations (CDOs)," "credit default swaps," "special purpose vehicles (SPVs)," and "structured investment vehicles (SIVs)". You'll also understand how a multi-national insurance company, A.I.G., came to occupy a pivotal position in this unstable speculative morass.

Perhaps even more important, what Tett, who is a columnist for the Financial Times, is able to elucidate is why these terribly smart, hardworking people became convinced they could not fail. On one level, that's only interesting as journalistic gossip -- it's a feature of all the finance collapse books I'm reading that the authors perceive and portray their subjects as fascinating people. (See also this one.) Nonetheless Tett offers cogent explanations. At root, financiers made bets based on data that was woefully incomplete because they found it profitable to do so.

Because everyone was using the same statistical method of devising their CDOs to contain risk, in the event of economic conditions that defied that modeling, huge numbers of CDOs would suffer losses all at once. As Alex Veroude, the manager of a CDO for Gulf International Bank explained, "The problem is that all the structures now are designed in the same way, with the same triggers. That means that if there is a storm, all the boats in the water will capsize."

...Like any model, it was only as good as the data that was fed into the "engine" and that data was usually based on what had happened in the past. ...How could the trajectory of a CDO squared be judged from past data when that "past" was just two years old? Or, for that matter, a subprime-linked derivative that had never been widely traded?

The financial system was (is?) a massive GIGO house of cards. GIGO is computer slang for "garbage in; garbage out" -- false premises interacting with poor information to yield false and meaningless results. Yet smart people were paid so handsomely to keep it going that most had little incentive to question it.

In her regular column, Tett recently touched issues that so far have been mostly taboo in the U.S. In a September 3, 2009 column, she pointed out:

On a personal level, I have little taste for seeing hordes of bankers heading for jail, or facing massive fines. Nor do I have any illusion that public or private prosecutions will resolve bigger structural flaws. A witch-hunt might be a media distraction.

But, on the other hand, if there is no retribution against financiers, it will be very difficult to force a real change in behaviour. After all, no amount of twiddling with Basel rules or pious statements about bonuses will ever scare a financier as much as the thought of jail.

Moreover, without some retribution it will also be hard to persuade voters that finance is really being reformed, or has any credibility or moral authority.

During the Savings and Loan bust of the early 90s, over 1000 U.S. bankers went to jail for fraud. This time around ... just Bernie Madoff.

Simon Johnson, a former chief economist of the International Monetary Fund, recently warned that though the financial markets may be stabilizing,

there is no real reform underway or on the table on any issue central to (a) how the banking system operates, or (b) more broadly, how hubris in finance led us into this crisis. The financial sector lobbies appear stronger than ever.

There's no shortage of Cassandras predicting that last fall's plunge could happen again. It does seem a democratic (small d) necessity to try to get a handle on this stuff -- and for that Fool's Gold is the most lucid resource I've come across.
Posted by janinsanfran at 12:10 AM

I have trouble balancing my checkbook so I won't pretend to know anything about international banking. What I do know is that the power brokers are still in charge and are still ripping us off.

Will honest reform ever happen with the banking industry? The vast amounts they are spending trying to avert oversight will probably kill it. I am becoming cynical.