International Transgender Day of Remembrance is observed on November 20 annually. Why do we need such a day? Because people whose aura and/or appearance makes someone else anxious about gender still get killed for being "too weird."

The Transgender Day of Remembrance was set aside to memorialize those who were killed due to anti-transgender hatred or prejudice. The event is held in November to honor Rita Hester, who [was] murder[ed] on November 28th, 1998 ... Rita Hester's murder -- like most anti-transgender murder cases — has yet to be solved.

Here at this blog, I'm always aware of these murders because, month after month, one of the pages getting the most visits is this photo-spread about the murder of transwoman Ruby Ordenana and the community that mourns her.

Other commitments have kept me from attending any of the local observances this year, but I'm less unhappy about that than I might be because I had the great privilege to attend a most inspiring event in the transgender community lst summer, a event that gave one small community a great sense of possible progress. 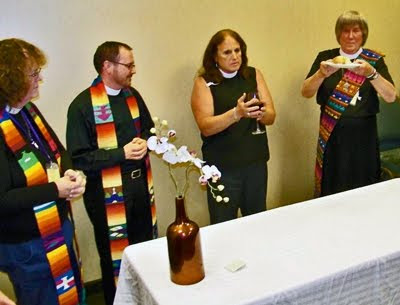 Photo from the camera of the Rev. Vicki Gray (at right) -- don't know who took it.

I'll let the Rev. Michelle Hansen (far left above) describe the magic of this event.

For the very first time, ever, TransEpiscopal held a Eucharist at General Convention [an enormous triennial Episcopal Church meeting]. Last night 19 Trans people, allies and friends gathered together in a small room at the Mariott Courtyard and celebrated the Lord's Supper together.

We had chairs in a circular pattern and a collapsible table. Gari went out and bought wine and a waiter at the Mariott gave us a loaf of bread. We borrowed a plate and a wine glass from the bar and we came together in the presence of the Lord and were filled with the Holy Spirit. We lifted up transitioning to the Lord in our words, in our hearts, and in our lives.

I was moved especially by the presence of the friends and allies who joined us and became part of us. We are not alone!

Being with each other is not always easy, but nobody should have to be alone.

Posted by janinsanfran at 2:26 PM

It is inconceivable to me why someone should murder anyone. But it is doubly horrifying to think they committed a murder simply because someone was different. That is pure evil.

The San Francisco Police Department just identified the guy who murdered her through his DNA which has been sitting in a San Francisco lab while the perp has been attacking other transgendered women all that time. The SFPD really is taking incompetence to a new, criminal level.