Saturday scenes and scenery:
Healthy food in plenty in the Mission

A recent article by Latoya Peterson in the web edition of The American Prospect lamented how difficult it has proved to develop farmers markets in Washington DC that serve low income communities and improve nutritional options. Too often farmers markets attract mainly young, urban professionals.

The open-air markets have become a familiar part of the summer landscape, but the shoppers most often browsing the stalls reflect just a tiny, wealthy segment of the city. Why isn't everyone shopping here?

... Farmers markets have been touted as the next great hope in stemming the obesity epidemic by providing fresh fruits and vegetables to those neighborhoods that are underserved by grocery stores but often full of fast-food restaurants. However, with all the pushes to make farmers markets more accessible -- like allowing food stamps and partnering with Women, Infants, and Children (WIC) programs -- the core issue has still not been addressed: Healthy foods need to be convenient and accessible as well as affordable.

The San Francisco Mission District includes some of the poorest census tracts in the city and has its quota of fast food chains. But my neighborhood also has an enviable selection of fruit and vegetable markets that are widely patronized by residents both comfortably off and very poor. 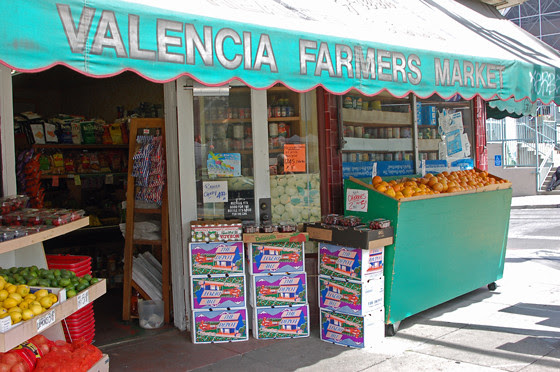 This is my corner store and fruit and vegetable stand, a little over a block from home. Like many inner city residents, I do far more of my shopping here than makes perfect economic sense. I am willing to pay a little more to save the time and hassle that it would take to drive to a supermarket -- there are fully stocked Safeway stores about 10 blocks away both north and south. There's a new Whole Paycheck (Whole Foods) about 6 blocks away. But the owners of this corner store chose their produce carefully -- their stock is usually better and sometimes cheaper than the big guys. And they stock a very carefully selected stock of household necessities crammed in every nook of their tiny space, so I can usually make do. 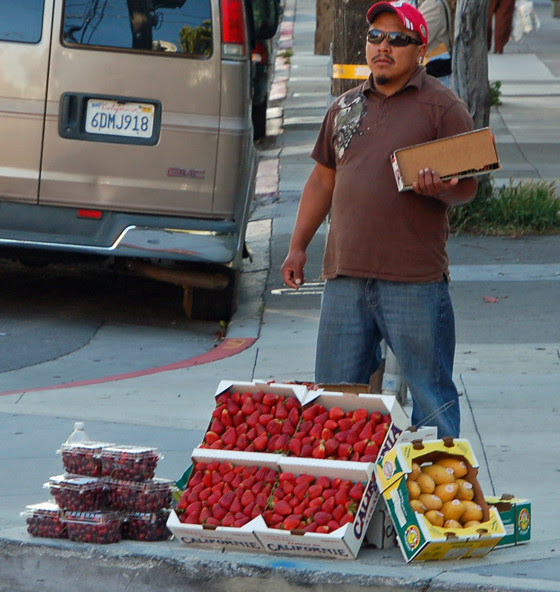 If I walk down the block, I'm likely to see this fellow on the corner. These corner fruit vendors peddling flats of fruit are a relatively recent addition to the neighborhood. Apparently some smart farmers have figured out they can get a better price for their produce through this distribution channel than by selling them to fruit wholesalers. When the items for sale are in season, the quality is indistinguishable from anywhere else. 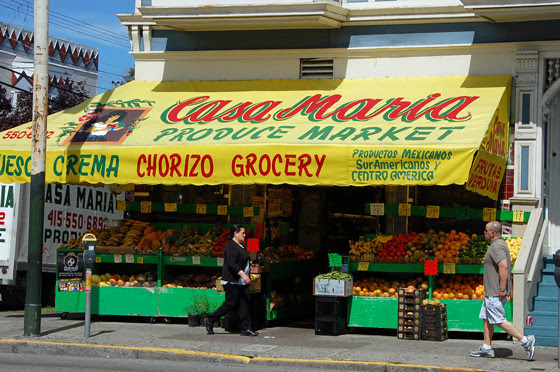 If I wander over to the post office, I see this store across the street. It gets a lot of traffic, even though there is a supermarket (IGA) just down the street which boasts that inner city rarity, a parking lot. It doesn't seem to hurt this corner store. 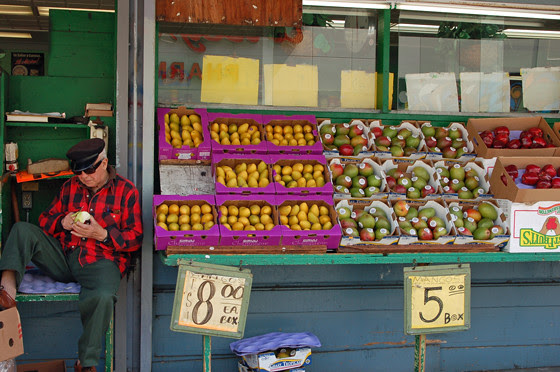 This stand is just a block away on Mission Street. It too usually has long lines at the cash register inside.

Why does the Mission have such a wealth of easily accessible fresh food? Some thoughts: As a child in the 1950s, I remember going to markets like these run by Italians in Buffalo. What seems so rare in contemporary cities is actually very old. Will we continue to value it? I think so.
Posted by janinsanfran at 3:00 AM