Once upon a time, nearly eight years ago (!) around the dawn of the post 9/11 U.S. security-theater state, my partner and I had a minor brush with the "no-fly list." After airline personnel told us we were on such a list and called in cops who detained us very briefly, the American Civil Liberties Union (ACLU) took our case to court to try to find out how such lists were assembled, who was responsible, why we were on the list, and how harmless people could get off the list. We were "good plaintiffs" -- white, female, self-confident, articulate and cooperative. The case limped along for years; at one point our lawyer turned up on a list. After much stalling by the feds and several rebukes from the judge, we got some information about the list though nothing very detailed -- and the ACLU was awarded court costs.

So it is with interest that I read today that the ACLU had brought a far more significant lawsuit on behalf of 10 U.S. citizens and legal residents who are genuinely burdened by the current application of a no-fly list. The way it works is that these folks go the airport and are told no way, no how, no circumstances, no warning, no judicial process will they be allowed to board an airplane. This often happens to them when they are in another country, effectively barring them from coming home.

The ACLU explains its lawsuit:

Today, the U.S. government's No Fly List consists of thousands of people who have been barred altogether from commercial air travel, resulting in a vast and growing list of individuals whom the government deems too dangerous to fly, but are too harmless to arrest. To deprive people fundamental rights without any notice or opportunity to object is unfair, unconstitutional, and un-American.

Meet the some of the plaintiffs: 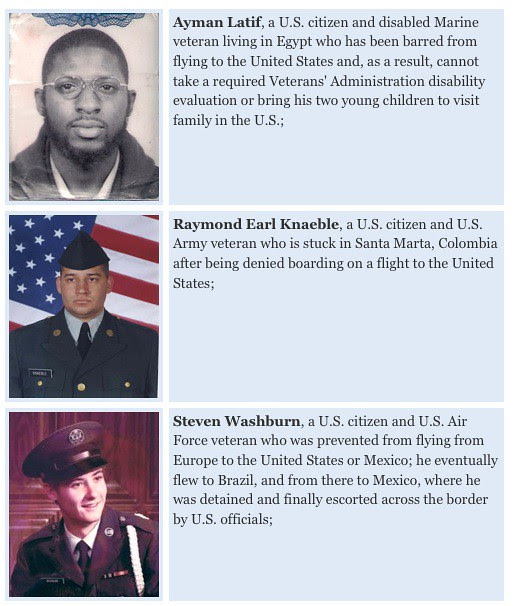 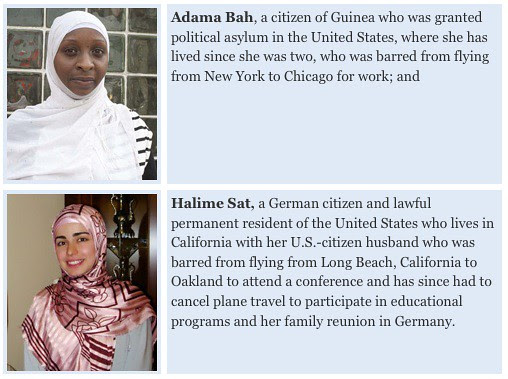 It does sadly appear likely that a common characteristic of these people is that they are Muslims.

Naturally the Obama administration was spooked by learning that its airline security measures missed the underwear bomber last Christmas. But covering the butts of failed "intelligence" hacks can't be enough reason to prevent citizens and lawful residents from traveling without any form of due process. That's "big government" over-reach of a sort that liberals and conservatives should both repudiate.

If you can, consider contributing to the ACLU.
Posted by janinsanfran at 4:28 PM

Hi janinsanfran :)
this is Halime, the girl on the no-fly list.

Was browsing though the net to find out some development news about the lawsuit and came across your article.
You are saying, that they put your name as well on that list long time ago. How did you deal with it?

I am German and my parents n family live in Germany BUT i am NOT allowed to go back home :'(

To be honest, i am sooooo depressed lately. Didnt you feel like a prisoner or a slave of someone?

My elder sister just got pregnant and I got to hear from my lawyers, that this issue will take at least a year :(

Any advice for patience you can give?

Its really hard and hurtful when someone accuses you of something, puts you on a list, BUT NEVER TELLS YOU WHY :(

How can u clear the misunderstanding?

God thanks, i'm not a business-woman or a journalist, i would have lost my job long time ago because of not being able to travel.

I would love and appreciate hearing from you..