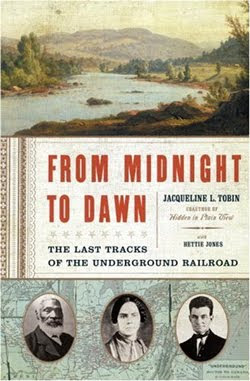 If you approach From Midnight to Dawn: The Last Tracks of the Underground Railroad by Jacqueline L. Tobin and Hettie Jones looking for historical understanding of mid-19th century African American communities in Canada settled by fugitive slaves and free Blacks, you might be disappointed. This little book is more a data dump, a collection of documentary tidbits and pictures of historical sites, than an integrated story of the life these mostly short-lived towns. Blacks escaped the United States to Canada because life under the British Crown was reliably free of slavery and opportunities were somewhat more equal with whites. But most deserted their new homes when the Civil War ended U.S. slavery, many serving in the Union Army before returning to the States.

I grew up adjacent to the Niagara Frontier area (across the river from Buffalo, New York), which, along with the Windsor, Ontario region across the river from Detroit is one of the foci of this book. I remember a few less-than-enlightening historical markers of crossing points and churches that had been used by these Black communities, but little remained that gave a sense of the lives once led there. So I was interested in what these authors had retrieved even though I wished they had made more of it.

Just to give a taste, an ongoing theme of the communities seems to have been a controversy over "begging," the practice and consequences of soliciting support from white allies to help escaped slaves and free blacks get started in a new country. Frederick Douglass, himself an escaped slave and major abolitionist leader who did not join the exodus to Canada but did run some of the more stable Black newspapers from upstate New York, was drawn into the fray, publishing both sides. Tobin and Jones report the argument he got into with Dr. Martin Delany who later served as commanding officer of Black troops fighting for the Union, but in earlier decades promoted Black emigration back to Africa and self-sufficiency in Canada. He particularly despised white abolitionist Harriet Beecher Stowe's Uncle Tom's Cabin, an extremely propogandistic novel attacking slavery.

In 1856, Dr. Martin Delany, a free black man who had already made a name for himself in the States as a writer and physician, moved to Chatham to pursue his interests under the security of the British flag. ... Delany was outraged that Douglass would embrace Stowe's work yet not even mention his, and wrote several letters to Douglass expressing his views. "I beg leave to say that she knows nothing about us, the Free Colored people of the United States," he wrote about Stowe, "neither does any other white person--and, consequently, can contrive no elevation; it must be done for ourselves."

To his credit, Douglass published Delany's letters, creating a written dialogue that represented, in essence, their philosophical differences. "To scornfully reject all aid from our white friends," Douglass responded, "and to denounce them as unworthy of our confidence, looks high and mighty enough on paper; but unless the back ground is filled up with facts demonstrating our independence and self-sustaining power, of what use is such display of self-consequence?"

Controversies about "the begging" repeatedly divided Canadian Black leaders as they accused each of profiting from donations or becoming dependent. Tobin and Jones quote another author rather than offer their own interpretation of the issues:

Historian Donald Simpson, with a century of hindsight, has suggested that the "whole struggle over 'the begging system' was a philosophical battle of major importance." He writes: Most blacks who had self-emancipated to Canada sought autonomy and self-sufficiency and to be let alone. It was difficult then, and it is difficult now, for well meaning whites to grasp the importance of this concept. Some whites through the years moved from the position of doing things "to blacks" to a point of doing things "for blacks." It remained difficult for most, however, to move further to the position of doing things "with blacks" and undertaking projects only if and when they were asked by blacks for assistance.

All of this seems extremely contemporary: people whose need forces them to ask for and use help from individuals and institutions that belong to the class that holds them down necessarily chew over the implications of "the begging." The anthology The Revolution Will Not Be Funded is a fine contemporary example.

Obviously I'm not urging anyone to run out and acquire From Midnight to Dawn, but the authors provide a tantalizing peak at some significant historical by-ways.
Posted by janinsanfran at 10:35 AM