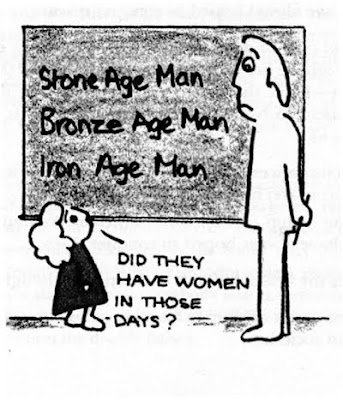 Somehow, until I recently read a New York Times obituary for Kate Swift, I'd been unaware there was such a thing as The Handbook of Nonsexist Writing. But there is. And it's lots of fun if you think women are people, as the cartoon illustrates.

I particularly like the section on what Swift and co-author Casey Miller call "The Pronoun Problem."

"God send everyone their heart's desire."

Most people are taught in school that the above sentence is ungrammatical. It should be corrected, we are told, to read:

God send everyone his heart's desire.

... Present-day linguists, tracing the history of the so-called generic he, have found that it was invented and prescribed by the grammarians themselves in an attempt to change long-established English usage. The object of the grammarians' intervention was the widespread acceptance of they as a singular pronoun, as in Lord Chesterfield's remark (1759), "If a person is born of a gloomy temper. . . they cannot help it."

In 1850 Parliament got into the act, passing a law that "words importing [signifying] the masculine gender shall be deemed and taken to include females." Perhaps so, as a matter of law, but speakers of English have never quite bought it, say Miller and Swift.

... at all levels of education people whose native tongue is English seem to know that he, him, and his are gender-specific and cannot do the double duty asked of them.

So precise writers quite commonly use they as a singular, to indicate they are speaking of both men and women. Miller and Swift provide nearly a page of examples from the works of people no one doubts write proper English.

"Nobody prevents you, do they?" -William Makepeace Thackeray

"I shouldn't like to punish anyone, even if they'd done me wrong." - George Eliot

"And how easy the way a man or woman would come in here, glance around, find smiles and pleasant looks waiting for them, then wave and sit down by themselves." - Doris Lessing

"If anyone doubts that democracy is alive and well, let them come to New Hampshire." - Ronald Reagan

I've long used they and them as gender inclusive singular pronouns. Now I've got a couple of accomplished grammarians to back me up. Most of us do this in speech. If enough of us insist on the usage in writing, perhaps we can get rid of the sexist grammatical prejudice against this usage.

There, I've got a new campaign.
Posted by janinsanfran at 4:00 AM

The Malaysian/Indonesian language employs the pronoun "dia" which is not gender specific and is used for both he or she.

I've used some form of "they" for a good while; in fact, I remember being told that it was something like "acceptable but rare," which was a way of saying that it was frowned upon by grammar prigs but, well, no, (mumble, mumble) it wasn't actually wrong, and all.

I also remember in the '60s some people trying to promote the use of the coined word "co" as a pronoun to be used in place of "he" or "him" when those did not specifically refer to a male person. I'm glad that one never went anywhere.