Where are elders going to live? 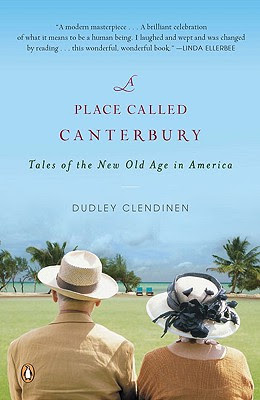 Over at Time Goes By, one of my periodic "Gay and Gray" columns is up today. If you are interested in likely futures for gay elders -- and all of us, gay and straight should be --go take a look.

While casting about for material for these columns, I read Dudley Clendinen's A Place Called Canterbury: Tales of the New Old Age in America, about his mother's last years living in an assisted living institution in Tampa, Florida. Clendinen came to my attention on the occasion of his moving and dignified description in the New York Times of his own descent into neuro-muscular failure due to A.L.S. -- Lou Gehrig's disease. Clendinen, a former national correspondent and editorial writer for the paper, also happens to be gay, though neither of these writings that delve into human intimacies make a point of that identity.

Canterbury is fascinating; if any reader is at all interested in assisted living communities or has friends living in them, I can highly recommend it. Clendinen spent long periods in residence; the product is indeed "tales" of ongoing life drifting toward death. Some stories are sure to delight and illuminate some corners we might not expect access to: relations with and among the staff; sexual outlets; how this community experienced and recovered from 9/11. It is full of gentle but wise observations; here's a sample:

There were, of course, many widows available to talk to one another about widowhood -- which usually meant talking about their late husbands. This was almost always a subject the talker enjoyed more than the listener. Most widows came to realize, after a while, that other people, by and large, didn't find their dead husbands that interesting. (Most of them had dead husbands of their own, after all.) Once they realized that, they moved on to other topics.

In order to write this book, Clendinen begins with an extraordinarily lucid description of what exists in the way of housing options for elders. Here he is a straight-up journalist doing a terrific job of exposition. I'm taking the liberty of passing on excerpts from it here because I know how well it contextualized these possibilities for me and I hope it might do the same for others.

The place I knew from childhood where old people sometimes went to live was the "Old PeopIe's Home." A quiet, old-fashioned exercise in noblesse oblige, originally founded in the 1890s, and now simply called the Home, it was by the 1950s, when I began to visit there, a rambling old stucco building of two or three stories, with high ceilings, individual or shared rooms, a dining room with ceiling fans, big overhanging trees, and deep shaded porches lined with rocking chairs, in which gently sat poor old white ladies in cotton dresses, and a few bent old white men in cotton pants. You had to be able to pay something to get in, and something a month, but like the local Children's Home, it was a nonprofit, subsidized institution, supported and run by a group of business -- and religious people -- Episcopalians, Baptists, Catholics, Methodists, and Jews -- for a certain class of the elderly in need. ...

The low-rent housing for the elderly that began to be constructed in Baltimore, where l now live, and then in cities across the country in the late 1960s and the 1970s, often took the form of plain, or brick-faced, concrete buildings of ten to fifteen floors, with two hundred or more modest studio and one-bedroom apartments in each. Sponsored by churches or synagogues, community organizations, unions that wanted to provide housing for retired workers, or other groups willing to create nonprofit corporations to take advantage of the low-interest, long-term federal loans being offered under the Section 202 program, that housing now exists in almost every city and town in America. Most cities have a number of buildings. The rents are kept below market rates, and the basic requirements for admission are that the applicants be sixty-two which doesn't sound old anymore -- and be able to pay the rent. The apartments were intended for the low- or modest-income elderly: widows, retired blue-collar or public service workers, people living on fixed incomes or in reduced circumstances. It was essentially the same economic class that had been served by the Home, and places like it -- of which there were not enough -- before the federal government got involved.

There was another Great Society program created in the 1960s called Section 8, designed to subsidize housing for the poor, ages eighteen and up. Those who qualify and are at least sixty-two often live in designated apartments in the Section 202 buildings, with most of their rent paid by the government.

Regardless of whether the government considers them poor or not, the main, and often only, source of income for many of the older people living in those buildings seems to be Social Security. ... They are basic apartment buildings with small residential spaces, some nice group spaces, but little support structure, and an aging population of residents who, if they live long enough, will have to move to nursing homes for the help they will need each day -- in bathing, dressing, cleaning, cooking, eating, and taking the right medicines at the right times.

The nursing homes to which they will go are the ones that take Medicaid -- the federal/state program that pays for nursing care for the elderly poor. To qualify for Medicaid, someone has to demonstrate essentially no assets and low income. Then he or she pays all but a few dollars of that income each month toward the nursing home bill, and Medicaid pays whatever its formula allows as the balance. ...

The cost of nursing home care is a giant part of the federal Medicaid budget, which itself takes a huge bite out of the whole federal budget. But the Medicaid formula, which differs state by state in how much it will pay, almost always pays less per month than high quality nursing care actually costs, regardless of where the nursing home is. For that reason, commercial, for-profit nursing homes that accept Medicaid patients are less well staffed and equipped -- in order to make a profit -- than nursing homes that can charge more because they do not accept Medicaid. In other words, the quality of care in facilities that accept Medicaid is less than in those that charge more, to a more affluent clientele. That shouldn't surprise. The retail cost of top-flight individual nursing care can be astronomical.

Canterbury and other nonprofit life-care facilities were created to offer comfortable living and good nursing care by yet another formula. It was one designed to serve not the poor ... or the shabby genteel ... but the middle class ... at a price that they could afford when they entered and that would not impoverish them in the end. The equation on which life-care facilities are based is an actuarial bet -- a gamble. It doesn't matter at what age over sixty-two a person wants to enter, but new residents have to be able to walk through the front doors on their own power. No wheelchairs. They have to have enough money to afford the sizable down payment due when they come in, and enough income for the fee they contract to pay each month. The down payment buys them no equity, so if they die soon, they lose. Their estates get back some, but less and less for the first two years, and then none. But if they live long, they win, especially if they end up in the nursing wing, because the nursing care costs no more -- except for the extra meals, pills, and nursing supplies -- than the monthly apartment fee.

Most people aren't going to this last kind of facility, but I appreciated the clarity of this explanation.

It's not clear to me what the new federal health reform law will mean to these arrangements, although apparently existing nursing homes are complaining that they'll be required to offer their employees health insurance. I'm unsympathetic. We ought to be able to do better than to expect elder care to be solely the work of the underpaid and uninsured.
Posted by janinsanfran at 2:25 PM

I considered moving to a building for elders but I took one look at the space and said, "No freaking way!" I like my space and, as George Carlin put it, 'a place for my stuff'. I'm going stay put until the I just can't. We have a couple "aging in place" programs in Ohio that provide help with housework, etc. that keep us in our homes and I hope to take advantage of them.