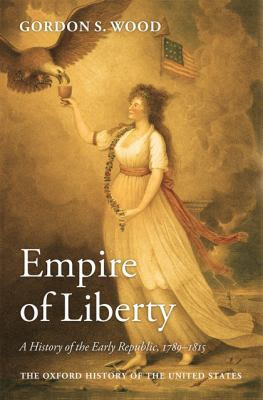 Nationalism, as an "ism" carrying the implication of an exclusive attachment to a particular country, has never quite worked for me. I'm fond of this place of my birth and some of its history, but it never occurred to me this was all there is. Probably relatedly, I'm instinctively suspicious of the idea of a "national character" -- aren't most people more complicated creatures than the phrase implies?

Historian Gordon S. Wood's Empire of Liberty: A History of the Early Republic, 1789-1815 is a grand, comprehensive, inclusive story of this country's early years -- a picture that calls my skepticism about an enduring "national character" into question. It is fascinating.

The title phrase -- "empire of liberty" -- is an expression used more than once by Thomas Jefferson without irony, in fact with vast enthusiasm and hope. At times he was referring to the western territories he acquired as President with the 1803 Louisiana Purchase that made for a continent spanning nation. Other times he seems to have meant the young Republic itself. There was no contradiction in his thinking between "empire" -- which many of us scorn as implying military occupation and repression and "liberty" -- a polity of expanding human freedom. No wonder this sometimes seemed a confused country. That contradiction has lived among us from the get-go.

This sprawling book defies easy summary, but I did want to highlight a theme that has implications for current struggles. Woods portrays those early years of the nation as the era when the idea of a "middle class" society superseded European notions of class stratification. Until perhaps the immediate present, the belief that this was a middle class nation in which hierarchies were fluid, most people lived neither at extremes of wealth or poverty, and industrious people had a chance formed part of the national psyche. It is interesting to read how this looked back then.

In America, wrote Benjamin Franklin in one of the many expressions of the idea of American exceptionalism in these years, "a general happy Mediocrity" prevailed.

It turns out there was both a material and an intellectual support for this confidence:

... White Americans enjoyed the highest standard of living in the world, and goods of all sorts were widely diffused throughout the society.

Most important of all, America was the premier land of liberty. The Americans had always been a vigilant people, jealous of their liberty and, as Edmund Burke had noted, snuffing tyranny in every tainted breeze. They knew -- the English radical Richard Price told them -- that "a Spirit," originating in America, was arising in the Western world. This spirit promised "a State of Society more favourable to peace, virtue, Science, and liberty (and consequently to human happiness and dignity) than has yet been known.... The minds of men are becoming more enlighten'd, and the silly despots of the world are likely to be forced to respect human rights and to take care not to govern too much lest they should not govern at all."

Over the decades covered by this volume, rule by people who were neither "gentlemen" nor "commoners" but rather "middling" folk flowered. The Founders of a hallowed memory were actually mostly slave-holding aristocrats, so creating the national mythology required lionizing another improbable figure. The "middling" sort went looking for their own champion:

If the middling artisans and entrepreneurs who were coming to dominate Northern American culture in the early nineteenth century were to find among the Revolutionary Founders a hero they could relate to, only Benjamin Franklin, the former printer who had risen from the most obscure origins to worldly success, could fulfill their needs. Only Franklin could justify the release of their ambition.

...Franklin emerged for businessmen everywhere as the perfect model of the "self-made man," struggling by himself to rise from humble origins in order to achieve wealth and respectability. Haughty Federalists could only shake their heads in disgust ...

The "self-made man" became such a familiar symbol for Americans that its original novelty has been lost. Of course, there had always been social mobility in Western society, at some times and in some places more than others. Eighteenth-century Americans had always experienced a good deal of it. But this social mobility in the past generally had been a mobility of a peculiar sort, an often sponsored mobility in which the patronized individual acquired the attributes of the social status to which he aspired while at the same time he tried to forget and disguise the lowly sources from whence he had come. As indicated by the pejorative terms -- "upstarts," "arrivistes,"' "parvenus" -- used to disparage those participants unable to hide their rise, social mobility traditionally had not been something to be proud of.

... independent mobile men were bragging of their humble origins and their lack of both polish and a gentleman's education. They had made it, they said, on their own, without family influence, without patronage, and without going to Harvard or Princeton or indeed any college at all. For many Americans the ability to make and display money now became the only proper democratic means for distinguishing one man from another.

...If indeed the Americans had become one homogeneous people and the people as a single estate were all there was, then many Americans now became much more willing than they had been in 1789 to label their government a "democracy."

Obviously I found all this quite fascinating. As I did, you may once have skimmed over the history of this period lightly in some long past class -- it bears revisiting.
Posted by janinsanfran at 6:30 AM

Terrific recommendation. It goes to the top of my "next" list - right after I finish Since Yesterday - The 1930s in America, Frederick Lewis Allen's contemporaneous account of the Great Depression from 1929 to 1939.

I highly recommend it; the many comparisons to our predicament today are amazing. Even the Occupy movement has more in common with the Bonus Marches than I would have thought and the characters at all levels - bankers, unemployed, politicians, etc. - well, nothing ever changes apparently.