At war in Yemen 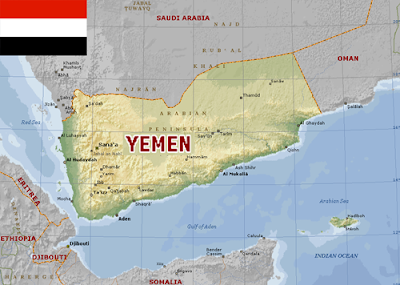 Might as well say it: the United States is at war in Yemen. The administration would prefer we didn't notice this, but it is true. Listen to Noah Shachtman and Spencer Ackerman at Wired's Danger Room:

For all the handwringing about the undeclared, drone-led war in Pakistan, it’s quietly been eclipsed. Yemen is the real center of the America’s shadow wars in 2012. After the US killed al-Qaida second in command Abu Yahya al-Libi earlier this month, Pakistan is actually running out of significant terrorists to strike. Yemen, by contrast, is a target-rich environment — and that’s why the drones are busier there these days.

The White House has declared al-Qaida’s affiliate in Yemen is to be the biggest terror threat to Americans today. The campaign to neutralize that threat is far-reaching — involving commandos, cruise missiles, and, of course, drone aircraft. It is also, according to some experts on the region, completely backfiring. Since the US ramped up its operations in Yemen in 2009, the ranks of al-Qaida in the Arabian Peninsula, or AQAP, have swelled from 300 fighters to more than 1,000.

These authors dig into developing U.S. operations in Yemen and produce considerable evidence that we're slipping more and more deeply into yet another country's civil war.

Ibrahim Mothana tried to get across what is happening in that strategically located ancient country in an oped in the New York Times:

“DEAR OBAMA, when a U.S. drone missile kills a child in Yemen, the father will go to war with you, guaranteed. Nothing to do with Al Qaeda,” a Yemeni lawyer warned on Twitter last month. President Obama should keep this message in mind before ordering more drone strikes like Wednesday’s, which local officials say killed 27 people, or the May 15 strike that killed at least eight Yemeni civilians.

Drone strikes are causing more and more Yemenis to hate America and join radical militants; they are not driven by ideology but rather by a sense of revenge and despair.

I'm old fashioned. I think when a President leads this country into a faraway war that will cause yet another population to hate us, he ought to tell us about it. Did not the Constitution say something about Congress declaring wars? How quaint.

Several sources recommend Waq al-Waq written by Gregory Johnsen, a Princeton scholar, for on-going English coverage of our Yemen war. Just in case we notice that we've poked another hornet's nest.
Posted by janinsanfran at 5:21 AM