On immersion in a psychotherapeutic Christianity 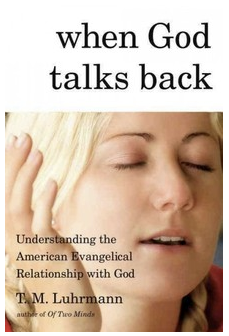 Psychological anthropologist T.M. Luhrmann has written a book that aims to

explain to nonbelievers how people come to experience God as real.

When God Talks Back presents a convincing thesis: with a boost from the cultural stew of the 1960s, many U.S. Christian evangelicals teach themselves to experience a feel-good God by practicing the feeling through prayer practices. That is, their God experience is all about feeling and practice.

…the remarkable shift in the understanding of God and of Jesus in the new paradigm churches of modern American Christianity is the shift that the counterculture made: toward a deeply human, even vulnerable God who loves us unconditionally and wants nothing more than to be our friend, our best friend, as loving and personal and responsive as a best friend in America should be; and toward a God who is so supernaturally present, it is as if he does magic and as if our friendship with him gives us magic, too. God retains his holy majesty, but he has become a companion, even a buddy to play with, and the most ordinary man can go to the corner church and learn how to hear him speak. What we have seen in the last four or five decades is the democratization of God -- I and thou into you and me -- and the democratization of intense spiritual experience, arguably more deeply than ever before in our country's history.

Luhrmann shares years of respectful participant research. She treats her subjects as sympathetic, intelligent people. The result is interesting, but the book left me with lots of questions. It seems unfair to fault a book for not answering my questions -- Luhrmann has done a fine, approachable, thoughtful job of answering hers. But I finished When God Talks Back feeling that a lot was missing and wondering -- how can so many of my sister and brother Christians, for I am one of these too, live within a consciousness of God's goodness that so little challenges the conventional pieties and practices of life amid the wealth, power, injustice and violence of the contemporary empire? They cherish their Bibles.

…evangelical Bibles are scrawled on, highlighted, underlined, starred, stuffed with notes and Post-its, and personalized with the possessive aggression of an urban boy spraying graffiti on a wall. Mine.

But do these cherished Bibles change them -- or merely comfort them, merely serve as talismans denoting their essential lovableness? If the latter, contemporary complacent Christianity has birthed a strange fruit.
Posted by janinsanfran at 5:00 AM