Who are the super rich and what are they doing to us? 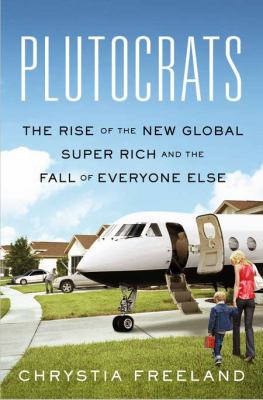 Last fall during the election campaign I'd occasionally be asked what I really thought about President Obama. Questioners seemed to mean something along the lines of "who is he?" Damned if I know. Mere consumers of the political theater of democracy can't know, of course. But even when he is disappointing, Obama remains a fascinating figure. I'd say I had a book to recommend, one that I found somehow a little more enlightening than his own autobiography, or David Remnick's effort or William Jelani Cobb's. I suggested Jodi Kantor's The Obamas. I don't know if anyone took up my suggestion -- after all, this was "chick nonfiction" (according to historian Douglas Brinkley.) But it brought me insights that none of the others had teased out.

Chrystia Freeland's Plutocrats: The Rise of the New Global Super-Rich and the Fall of Everyone Else strikes me as another important book that a lot of people are probably dismissing as "chick nonfiction." Dismissing this is a mistake. Freeland has been an accomplished financial journalist with the Financial Times and Thomson Reuters; she cut her reporting teeth on describing the rise of Russia's post-Communist billionaires in Sale of the Century. Sure, she writes charmingly about the milieu of her subjects -- but it's the dimwitted reader who misses the edge she brings to her topic.

In this book she chronicles the two current Gilded Ages she sees global plutocrats exploiting concurrently.

The gilded age of the emerging markets is the easiest to understand. Many countries in Asia, Latin America, and Africa are industrializing and urbanizing, just as the West did in the nineteenth century, and with the added oomph of the technology revolution and a globalized economy. The countries of the former Soviet Union aren't industrializing -- Stalin accomplished that -- but they have been replacing the failed central planning regime that coordinated their creaky industrial economy with a market system, and many are enjoying a surge in their standard of living as a result. The people at the very top of all of the emerging economies are benefiting most, but the transition is also pulling tens of millions of people into the middle class and lifting hundreds of millions out of absolute poverty.

… The collapse of communism is more than a footnote to today's double gilded age. Economic historians are still debating the connection between the rise of Western democracy and the first gilded age. But there can be no question that today's twin gilded ages are as much the product of a political revolution -- the collapse of communism and the triumph of the liberal idea around the world -- as they are of new technology. …

At the same time, the West is also benefiting from the first gilded age of the emerging economies. If you own a company in Dallas or Dusseldorf, the urbanizing peasants of the emerging markets probably work for you. That is good news for the plutocrats in the West, who can reap the benefits of simultaneously being nineteenth-century robber barons and twenty-first century technology tycoons. But it makes the transition even harsher for the Western middle class, which is being buffeted by two gilded ages at the same time.

Freeland, not surprisingly given her experience, is one of the many smart critics of plutocracy who adopts the view that un- and under-regulated free market capitalism is the worst of all possible systems -- except any other that humans have created.

Like at least one other female financial journalist I can think of (Gillian Tett), Freeland approaches her subjects with an ethnographer's eye.

… if you are looking to define the archetypal member of the super elite, he isn't Jane Austen's Mr. Darcy, with his gorgeous acres of Pemberley. He -- and they are almost all still men -- is an aggressive, intensely educated mathematician, the son of middle- or upper-middle-class parents, who made his first fortune young. … The result is a super-elite whose members have been working to join it for most of their conscious lives -- if not since nursery school, certainly since high school, when the competition for those elite college places begins in earnest. … One sign of the shift is the illicit drug of choice among the gilded youth -- Adderall. Its great virtue, one Princeton engineer told me, is that you can study for twenty-four hours without losing your concentration or needing to sleep.

… Revolution [technological, financial, political] is the new global status quo, but not everyone is good at responding to it. My shorthand for the archetype best equipped to deal with it is "Harvard kids who went to provincial public schools." They got into Harvard, or, increasingly, its West Coast rival, Stanford, so they are smart, focused, and reasonably privileged. But they went to public schools, often in the hinterlands, so they have an outsider's ability to spot the weaknesses of the ruling paradigm and don't have so much vested in the current system that they are afraid of stepping outside it.

… If wonks were fashionistas, big data would be this season's hot new color.

… The plutocratic bubble isn't just about being insulated by the company of fellow super-elites, although that is part of it. It is also created by the way you are treated by everyone else. One financier, speaking about his friend who is one of the top five hedge fund managers in the world, said, "He's a good man -- or as good as you can be when you are surrounded by sycophants."

Freeland seems to find the plutocrats she has reports on alluring, if also slightly horrifying; I find them repulsive. Their myopic worship of money and undisguised greed leave me wondering how their mothers can have failed so utterly to knock some humane values into them.

But Freeland knows that the society these men are building is a house of cards that can't last if plutocrats succeed in warping our institutions entirely to their benefit. She explores some of the contradictions between the one percent and the .01 percent that provide some space for efforts to rein in the global super rich. She covers some of the same ground explored in Why Nations Fail, such as the example of the Venetian Renaissance elite who stifled innovation and social mobility and ended up losing their preeminent position in commerce. A Gilded Age, new or old, is delightful for global winners and their hangers on, but it is devastating for most of us.

If you want your plutocracy charmingly and bitingly described, this is a book for you.

***
I need to mention that the notion that uncontrolled free market capitalism is heating up the planet in ways that are likely to change the prospects for even the most affluent humans shows up nowhere in this book. In 10 years, in 20 years, in 50 years, will be it be possible to describe how our economies are and have been organized without mentioning the impact of climate change? I doubt it. But for now, the band plays on...
Posted by janinsanfran at 5:00 AM

Hi Jan,
Hope you two are having a grand time in Spain...are you visiting any adjoining countries as well?
I wanted to recommend a book, "Flee to the Fields", it is the best groundwork for thevsystem of Distributism I've yet read. It makes the case that monopolism of agriculture will eventually doom us, rural or urban dwellers. And it also points out that religion tends to flourish more in rural areas in synch with Nature, while materialism tends to replace religion in the urban environment. If you'd like, I'll send you a copy. Would love to have lunch with you one of these days and discuss current economics, plutocracy, etc. Enjoy your trip!