Community rally for a community college 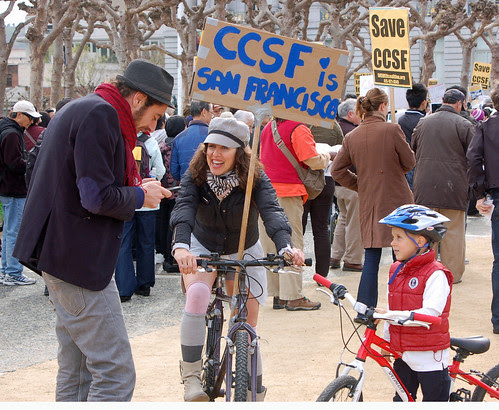 Thursday afternoon about 500 students, teachers and plain citizens concerned about the looming possibility of losing City College of San Francisco (CCSF) rallied at Civic Center. The 85,000 student community college is under the gun -- threatened with losing its accreditation for failure to comply with ultimatums from its oversight body, the Accrediting Commission for Community and Junior Colleges (ACCJC). This isn't a state agency though the school gets most of its money from taxes -- according to its bylaws, the accrediting commission is a private non-profit recognized by the U.S. Department of Education. Hmmm …

An outside Interim Chancellor, Dr. Thelma Scott-Skillman, was brought in bang CCSF into line. I guess she's a professional flack catcher. She ought to be if reports that she is being paid $1000 a day are correct.

CCSF is a much beloved community institution. It provides educational opportunities to a very diverse student body. State budget cuts have hammered it, like all state educational institutions. Nobody doubts CCSF also has internal problems. But well-meaning people disagree as to what the problems are. An outsider like me can only have an impressionistic sense of things, though I have some data points. 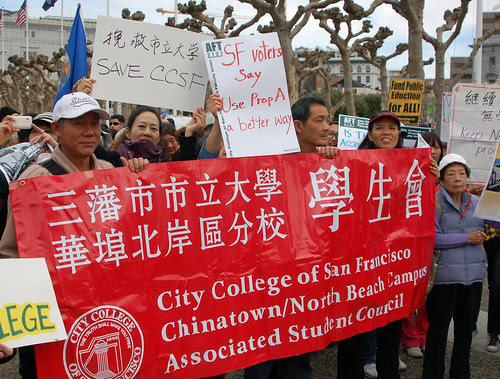 After looking in on the rally today, I thought I ought to explore news accounts of the CCSF situation. I turned up two interesting details of the accreditation process that seemed telling.

The ACCJC report accused CCSF of having too few administrators! What?!? The complaint seems unheard of. Aren't educational bureaucracies top-heavy? It turns out that what the Commission was complaining about was a system whereby academic department chairs got released time to carry out administrative functions. That apparently is wrong: to get a passing grade, the college must hire professional administrators to be "deans." The Bay Guardian reported some faculty responses to this move:

“People without academic expertise, who don’t know the field, will lead the departments,” said Kristina Whalen, the director of the speech department at CCSF. “Academic reorganization will have automotive and child development under the same dean -- those fields aren’t related.”

… “I’ve worked at other schools where you reported to a dean,” art teacher Andrew Leone told us ... He’s worked at San Francisco State University, and USF, among other schools, he said.  “The dean has so many responsibilities, there’s no way they can deal with them all.”

The chairpersons at City College were more efficient at taking care of teachers’ needs, he said. Now, “they’re giving us a top down corporate model. They’re turning us into Wal-mart.”

That last charge goes to heart of the fears this accreditation process has unleashed. Is City College required to lose its soul in order to stay open? There certainly are hints that is what the ACCJC wants. Under its pressure, the school's mission statement has been changed. Past objectives that included “civic engagement, cultural enrichment and lifelong learning” are gone from a new mission statement.

Our primary mission is to provide programs and services leading to
*Transfer to baccalaureate institutions;
*Achievement of Associate Degrees in Arts and Sciences;
*Acquisition of certificates and career skills needed for success in the workplace;
*Basic Skills, including learning English as a Second Language and Transitional Studies.

In addition, the college offers other programs and services consistent with our primary mission, only as resources allow and whenever possible in collaboration with partnering agencies and community-based organizations.

This set of objectives -- with their grudging addendum -- emphasizes what very likely the majority of the students most hope to get from the institution: academic and vocational credentials. But the new emphasis begins take the "community" out of community college.

It is not a pipe dream to say the city wants more; we've said we'll pay for it. In the long run, reducing this institution to a mere vocational hurdle will kill community support. I guess a non-union, corporate City College might be good for Walmart. But it wouldn't be good for the life of our lively city.

The accreditation commission will evaluate CCSF's peace offerings and render judgment in July. My friends at the school are not hopeful. The demands seem insatiable. 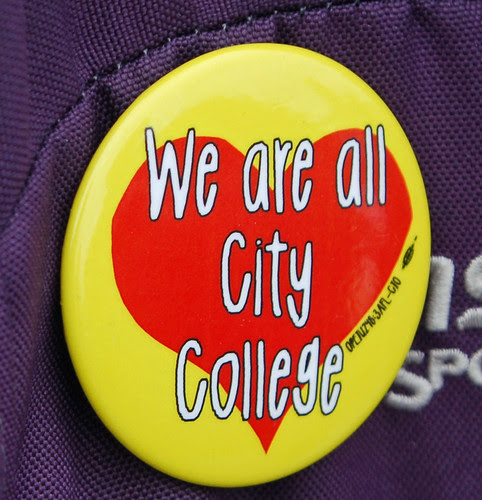