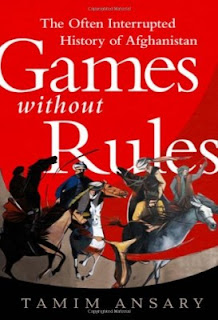 It's tempting to think that if Tamim Ansary's Games without Rules: The Often-Interrupted History of Afghanistan had been around when the U.S. went barging into the place in 2001, we might have made less of hash of it. But if this book explains anything cogently, it is that such an outcome would have been unlikely.

Here's a tantalizing bit from the introduction:

Five times in the last two centuries, some great power has tried to invade, occupy, conquer, or otherwise take control of Afghanistan. Each intervention has led to a painful setback for the intervening power, and the curious thing is, these interventions have all come to grief in much the same way and for much the same reasons -- as if each new power coming into Afghanistan has vowed to take no lessons from its predecessors.

… The great power interventions in Afghanistan truly make a compelling story, to be sure; but the intervened-upon have a story of their own as own, which keeps unfolding between interventions as well as during. In this story the interventions are not the main event but interruptions of the main event. … This is not to rehash the old "graveyard of empires" lament, the conventional wisdom that great-power interventions in Afghanistan are doomed to fail because this place is impossible to conquer. The tough terrain and the fractious people do present a special challenge to would-be conquerors, and yet Afghanistan has in fact been conquered many times. …

Afghanistan is not really impossible to conquer. It's just that all the successful conquerors are now called "Afghans."

… This is the land-in-between, the land squeezed between mighty powers wrestling for stakes much bigger than Afghanistan. … Through the ages, the great powers kept changing, the contention never ended, and yet the land-in-between never disappeared. Far from being absorbed, Afghanistan keeps absorbing elements from all who encroach upon it, reconfiguring itself endlessly as an entity distinct from its neighbors and invaders.

Interventions in the last couple of centuries from Europe (the Brits, the Russians) and now the United States have collided with this amalgam of peoples in the midst of their own process of coming to terms with modernity. The result has been for Afghans great lurches between periods of flowering self-invention and times of violent reaction, all little comprehended by the interlopers and usually bloody. There's been a repeating pattern to the trajectory of these incursions. Ansary brings the story up to date:

… Ten years ago, people in Kabul seemed to regard traffic regulations as quaint foreign imports unsuited to this climate. They still do. … Cars are are constantly bursting out of their lanes, even into supposedly one-way streets to drive against the prevailing flow because their drivers have spotted openings. You might suppose that here there are no rules.

You would be wrong. If there really were no rules, one would see thousands of car accidents. What I saw were thousands of near misses: not one collision. The rules may not be obvious to foreigners, but they exist and Afghans understand them. And the same is undoubtedly true of the country's social and political life.

The rules may be hard to discern in part because there isn't just one set. Afghanistan probably had a consistent culture when it first began coalescing as a nation-state in the eighteenth century, and, although it was evolving, it was doing so within a coherent framework.

Then the country experienced a series of incursions emanating out of Europe, which gave rise to a maelstrom of conflicting currents. Within the country, the multitudes whose cohesion derived only from traditional tribal and Islamic values expected their rulers to honor and defend those values with their lives and to otherwise leave them alone. Afghan rulers could not simply comply, however, for looking outward they always saw two or more well-equipped Western goliaths facing off against each other, with hapless Afghanistan situated between them on their line of scrimmage. Each goliath was intent on moving into this space to keep the other goliath from moving into it. Each expected to succeed with Afghans because it presumed it would bring cultural and material improvements to the country. Each was happy to deal with Afghan leaders so long as they operated on cultural ground familiar to Europeans.

Trying to negotiate between the local and global forces, between the inner and outer worlds, put Afghan rulers in a double bind. Anyone who wanted to rule this country had to secure the sponsorship of the strongest foreigners impinging on the country at that moment; yet no Afghan could rule this country for long without the allegiance of the country's deepest traditional forces. … The same thing is happening again now. Afghans see the Karzai government signing one agreement after another with the Americans, and they shake their heads in disbelief. Americans see Karzai approving ever more reactionary social laws and issuing outlandish threats to join the Taliban, and they wonder if the president of Afghanistan has lost his mind. …

burgeoning chaos that saps [the invaders'] resources, leaving little time or strength for carrying out the original intentions of the intervention, whatever those were. The problem is not that Afghans unite and then cannot be conquered; the problem is that Afghans fragment and then cannot be governed. The great powers have a stake in making Afghanistan more governable, but the only people who can achieve this happy result are Afghans -- because it depends on the resolution of contradictions within Afghan culture.

A country so unsettled within its own evolution is not a plausible candidate for COIN (the last decade's faddish military counter-insurgency and nation-building theory). And so the U.S. and NATO have learned, at great cost.

***
This is a charming book -- an apparently incongruous description for a story of bloody revolts, wars and occupations. But it is true. Ansary likes the people of his birthplace and he wants the people of his adopted country to understand and feel warmth toward those we have invaded. He successfully communicates what it is like to look at a series of bumbling invaders from one Afghan perspective.

I would urge anyone planning to read this to do it the way I did, as an audiobook. Ansary reads himself, gently, with perfect timing and ironic humor. And without the audio input, I suspect most of us would have no idea how to pronounce the names.
Posted by janinsanfran at 6:00 AM